Splat! Another bug liquefied on the windshield. I wonder what that bug was thinking. Could this “accident” have been a surprise? My Jeep isn’t exactly silent on the road. The bug must surely have heard or seen me coming. The road just didn’t appear; it’s been here for a while and it’s quite an obvious hazard among all that makes up the ecosphere of a bug’s life. Considering the thousands of acers where it could have been flying, it chose here and now, where cars go fast all day. Was it not paying attention? Does it not have the intelligence or basic fear or threat instinct to know it can’t survive a head-on impact with an object much larger than itself moving 80 miles per hour?

It all seems so senseless. And now I have to clean off my windshield.

I must be tired.  Who thinks about these things during the course of a normal day?

Ah, but today is not normal. And, yes, I am tired. After only a couple hours sleep, I woke at 4:30 a.m. to hike up a 14,000-foot summit in the beautiful San Juan Mountains in Colorado. And after that 7-hour trail, I’m now driving a few more hours to my next trailhead to hike another several miles up to an 11,000-foot alpine lake.

It’s Friday morning at the onset of a 3-day weekend. I’ve been monitoring the rapidly changing weather reports for the mountains over the past couple days. And now I’m ready to make a decision to either pass on the long drive with the risk of an unsuccessful summit attempt due to bad weather or to dismiss it all and go for it. I finally decide that if no lightning is in the forecast, I’m going. I look one more time. No lightning.

My friends are notified of the decision and everyone is on board. I’ll leave tonight with one of the crew and I’ll meet the other two sometime on Saturday somewhere on the mountain. We leave at 7pm for a 6-hour drive and decide to camp at the lower Nellie Creek road trailhead.  It’s 1:30 am when I finally crawl into my hammock. It’s comfy.

At 4:30 am we are heading up the 4 wheel-drive road, crossing two creeks, and finally arriving at the upper trailhead about an hour later. It’s still dark. Headlamp’s on and up the trail we go.

Uncompahgre Peak is the destination. It will be a 7.5-mile hike with 3000 feet elevation gain. At 14,321 feet, it’s the 6th highest summit in the Rocky Mountains and the highest in the San Juan Range.

At about a mile into the hike, dawn is upon us and the peak reveals itself to us for the first time. Rising 1500 feet above the alpine basin we admire the nearly solid 700-foot vertical north face. It’s ominous. 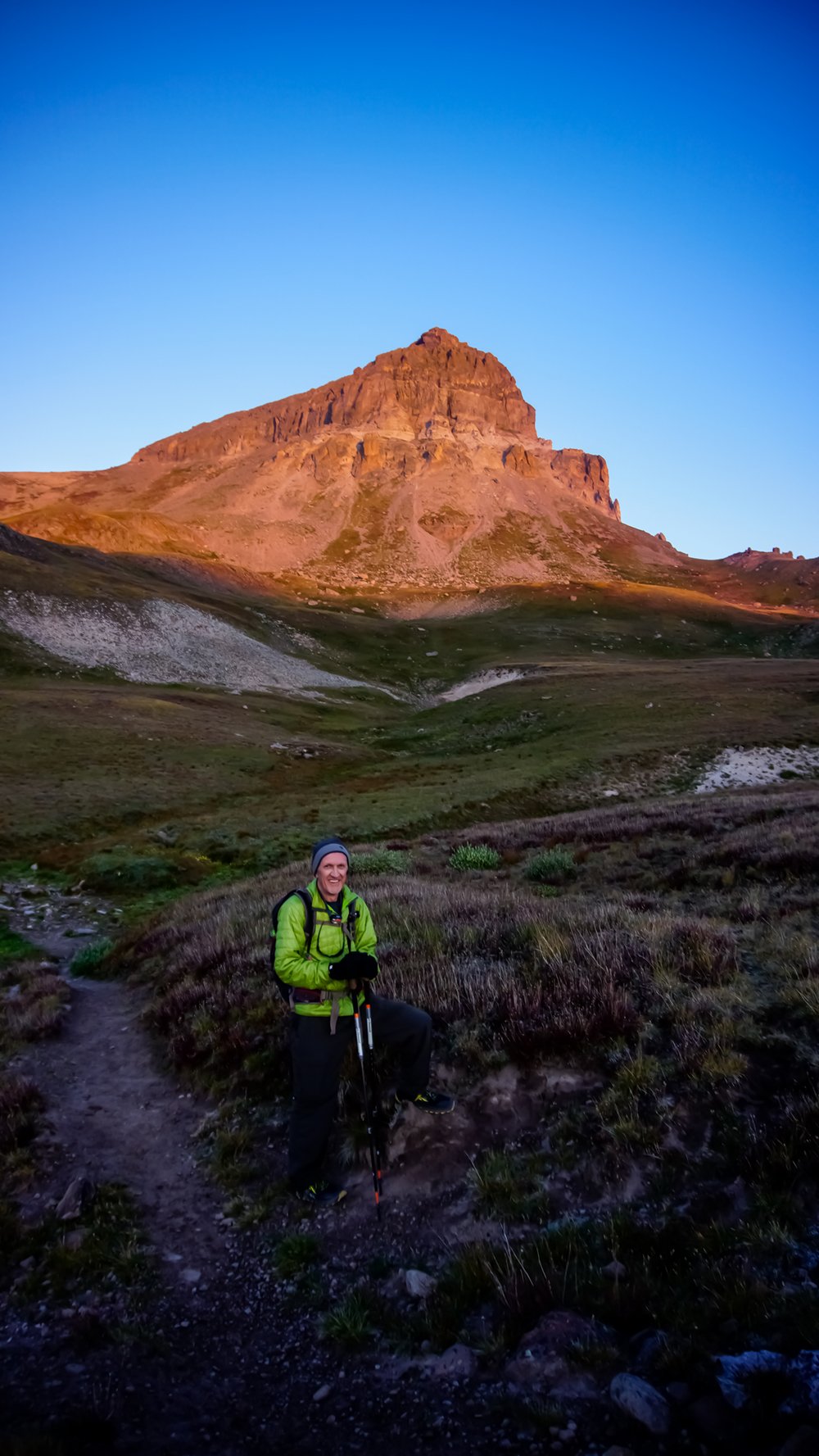 The native Ute tribe, specifically the Uncompahgre band (sometimes called the Tabeguache – pronounce: TAB-uh-wahch) populated this area for generations. They traveled the area in family units, gathering food and hunting.  The practice was to only take what was required, never over harvesting, in order to give the environment time to replenish. It was a way of ensuring their survival. They are the oldest residents of Colorado. The Utes occupied the entire great basin territories of Oregon, Idaho, Wyoming, Eastern California, Nevada, Utah, Colorado, Northern Arizona and New Mexico.

The name of the peak is disputed, but many agree that it is a loose translation of the Ute work meaning “dirty water” or “hot red spring water”. There are hot springs in the area with rocks of red hue.

The approach to the ridge is a nice casual ascent. We were talking about how this might be a nice hike for those looking for an “easy” beginner 14er.

The trail meets the Big Blue Trail near the bottom of the basin. It also meets the Driveway Trail on the approach ridge, which leads to Wetterhorn and Matterhorn Peaks. 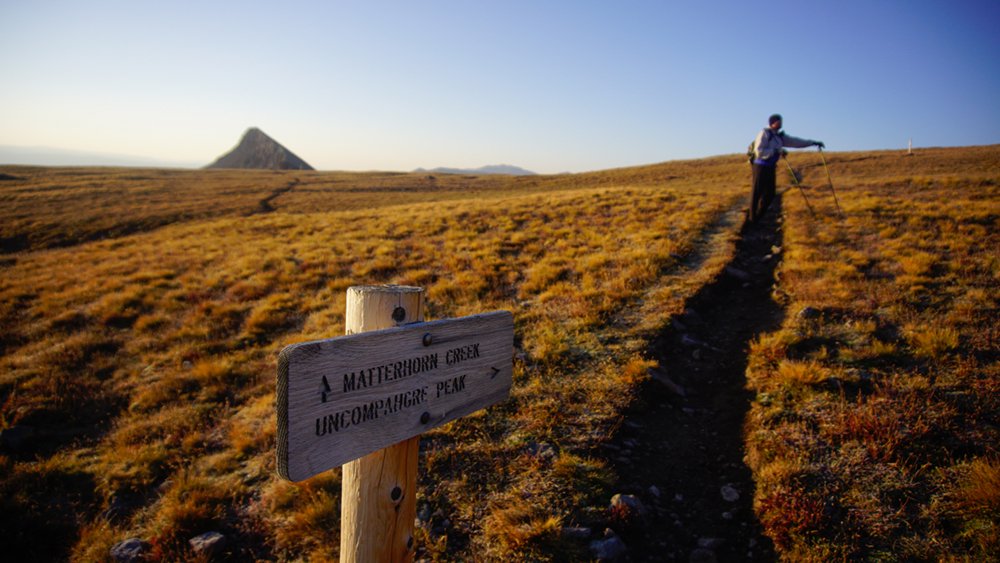 An unnamed 13,000-foot ridge circles to the south. It’s along the same ridge we gain for our approach, where we would meet our two other companions. 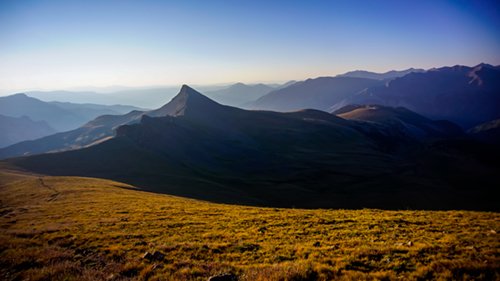 With higher altitude comes more rugged terrain and a series of switchbacks. Here’s a view from near the top of the switchbacks. 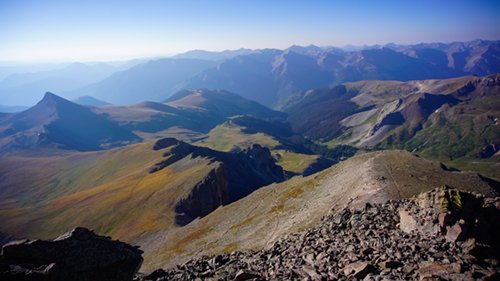 The trail winds around to the south side of the summit where we had the option of taking a short lower class three route. A shot from on top of that section: 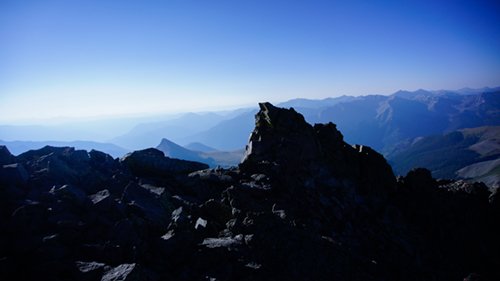 This leads to the last push to the broad summit. 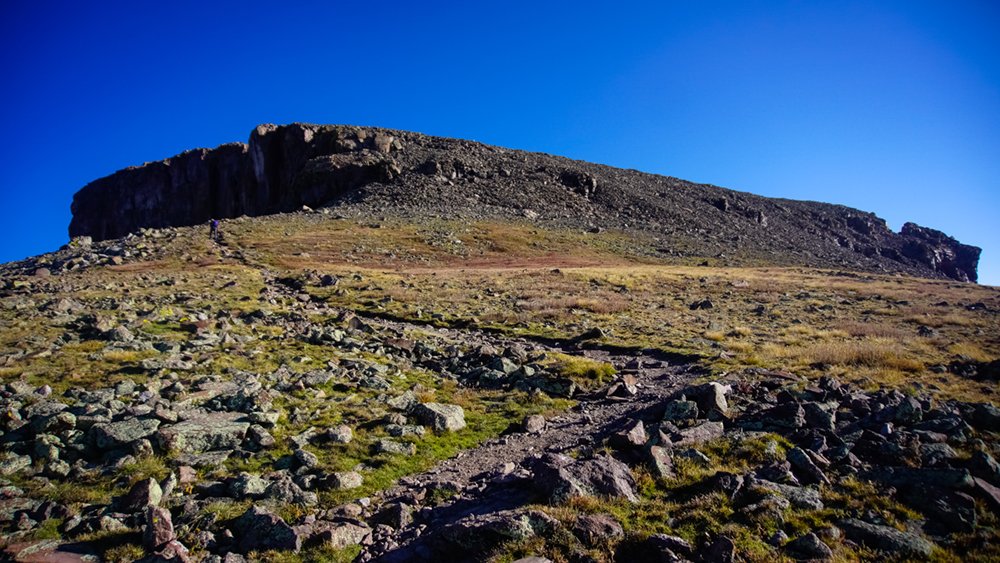 The arrival on the summit was celebratory, as always. 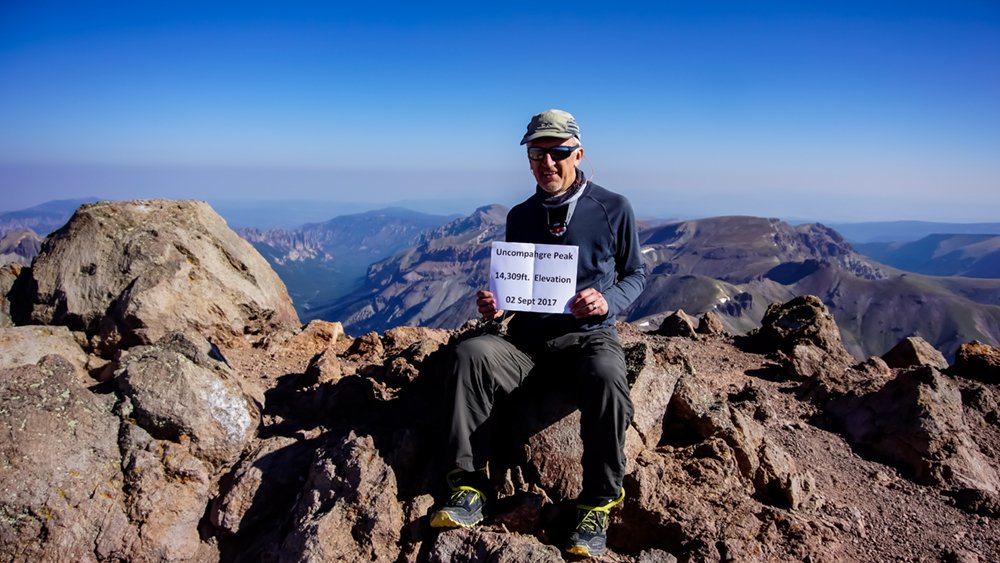 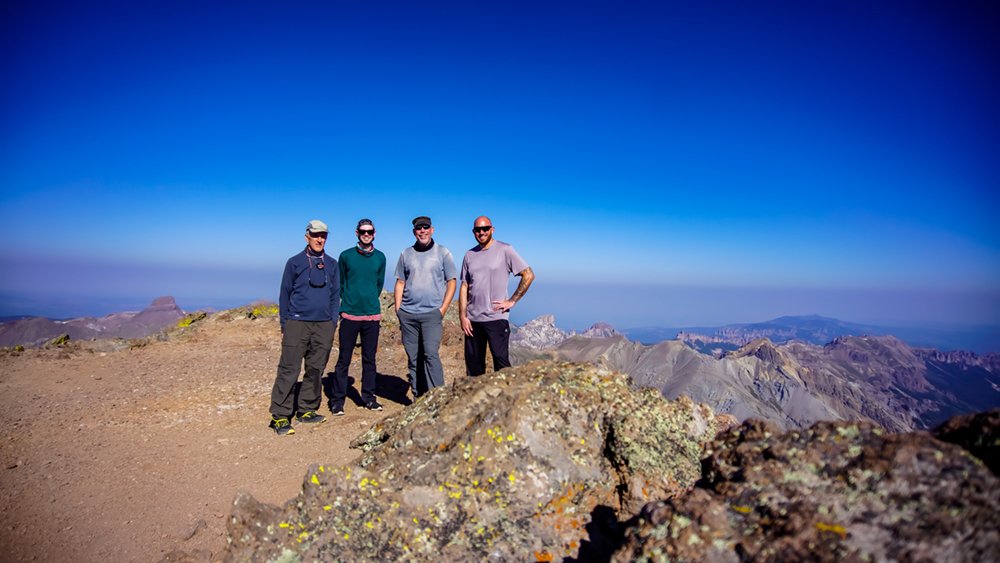 Some of the more iconic San Juan peaks can be seen from up here: Wetterhorn, Matterhorn, Fortress, Precipice, Coxcomb, and Redcliff. 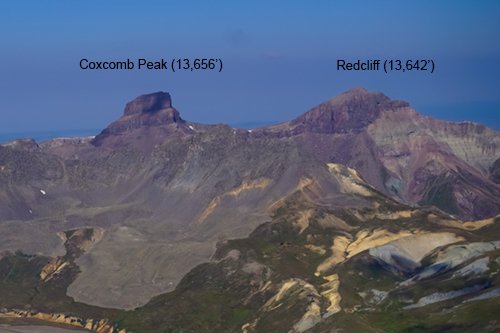 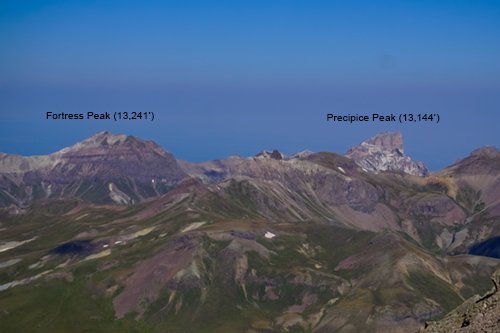 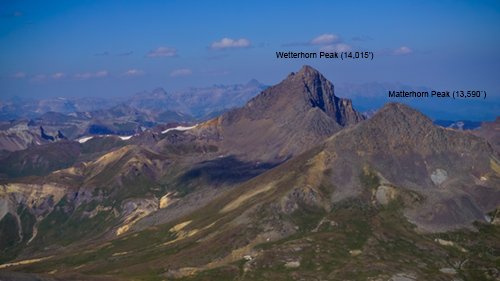 And there are great views of lesser known but none-the-less spectacular mountain scenes. The dark line is the sky is smoke from the dozens of fires burning in the western states.

The summit is essentially the top of the north face – remember we saw that from below. And it allows for some spectacular photo opportunities. 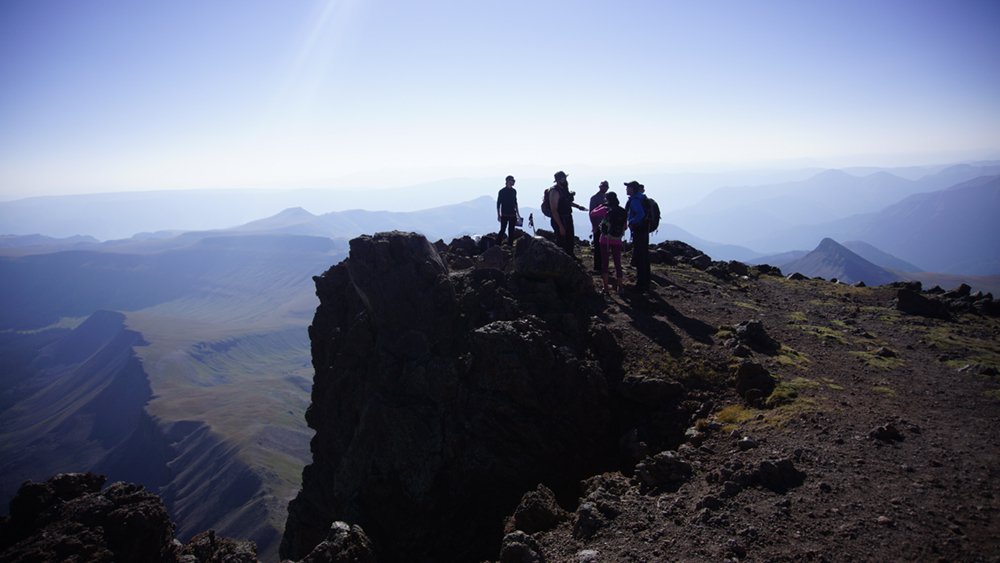 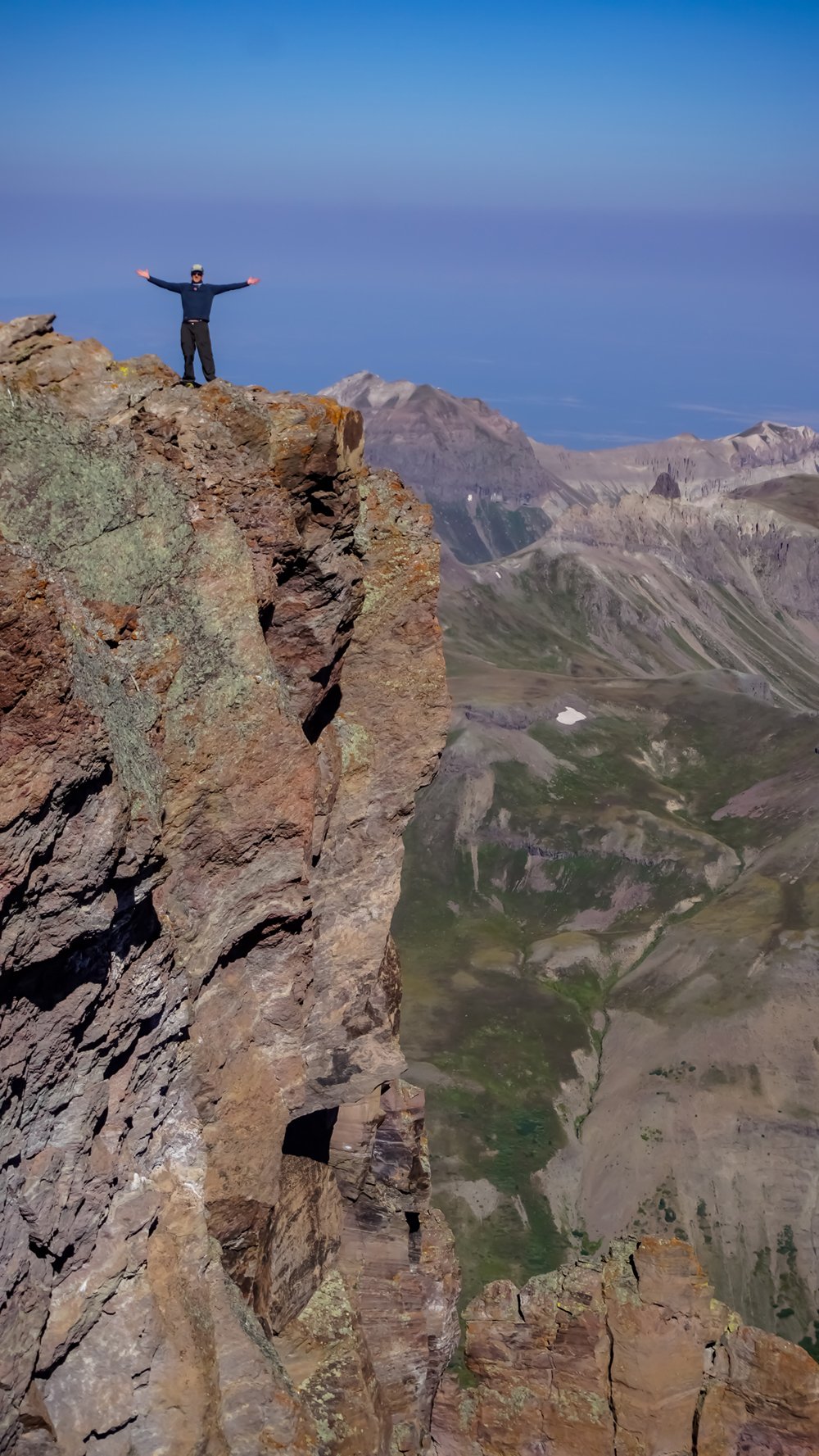 The return trip was somewhat leisurely. I’m always fascinated by the descent when the ascent was in the dark. It’s like a whole new trail. 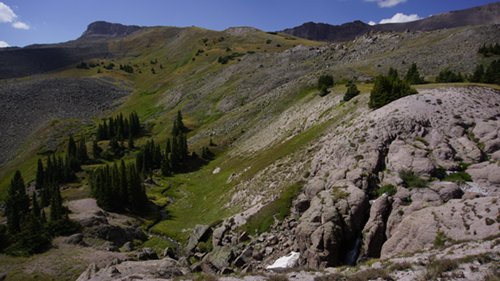 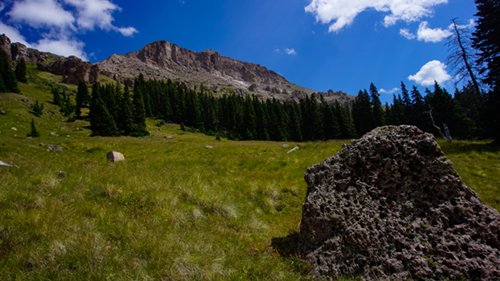 And the arrival back at the trailhead means the end to another great summit adventure. 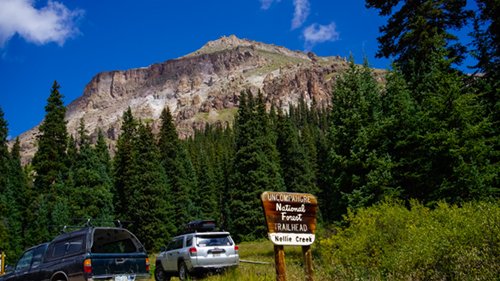 As noted earlier, this was just the beginning of our day. With just a few hours’ sleep, we still had the rough road back to our camp and some backpacks to prepare. It would be several more hours before we started the next trailhead and hike in to Blue Lakes on the other side of the range. I’ll write another blog post for the Blue Lakes. It deserves its own.

So you see, this was not a normal day for me - although, it would be wonderful if it was. What is not wonderful are the senseless and tragic encounters with bugs on windshields… followed by further senseless thoughts about the reason for those encounters.

Enough of all that – let’s move on to Blue Lakes!