I’ve spent a lot of time in Buena Vista, where the Sawatch Range consumes the western skyline. From the first time my eyes took in this sight I knew I was destined to become part of it. Indeed, it has taken many of my weekends over the past several years. I have now hiked to the top of all 15 of the peaks over 14,000 feet in this range at least once. That’s not impressive to the real mountaineers, but for this “over the hill” Midwesterner, I feel it’s more significant than counting binge TV weekends. No judgement; the world needs everyone; I just have other ambitions.

As the southern portion of the Sawatch diminishes, the earth gives rise to the Sangre de Cristo Mountain Range. The view from Westcliffe is equally as attractive as the Sawatch is from Buena Vista. And since prior to this year, I had not put one footprint in those hills, it too had given me that same feeling of destiny. I need to get to know these hills.

A little more about the Sangres: The Sangre de Cristo Mountains extend from Salida, Colorado to Santa Fe, New Mexico – 200 miles long. It is the southernmost subrange in the Rocky Mountains. Within this range there are 86 peaks that are over 13,000 feet and 10 that are over 14,000 feet. Blanca Peak is the highest at 13,345 feet. If the summits are not enough, there is rafting, fishing, skiing, and many miles of trails for hiking, backpacking, and mountain biking to enjoy. The area contains four National Forests and two Wilderness Areas all within ten subranges. The Great Sand Dunes National Park and Preserve is part of these mountains. The geology is fascinating, but too much to go into here.

This past winter I took a couple snowshoeing hikes in the Sangres, up South Colony Lakes trail. This trail ends in an alpine valley. The main attraction: The Crestone Peaks, and their identifiable gendarme formations.

But the Crestones are not the only residence guarding the valley. Humboldt Peak, Broken Hand Peak, Milwaukee Peak, and Marble Mountain all contribute to the surrounding grandeur. Here are a couple winter views from within the valley. 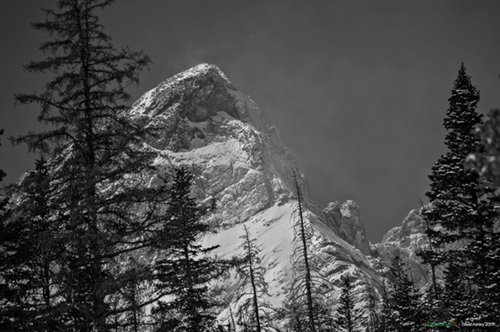 I chose today for my first non-winter hike into this valley, backpacking in to the lakes on Friday and climbing Humboldt Peak on Saturday.

Ok, let’s review. What happens to best-laid plans? That’s right; they go awry. I wanted to leave by early afternoon, but my Jeep had other plans. It decided that I should fix its pinion seal and leaky shocks first. I ended up running only an hour later than planned.  My mechanics put a rush on it, probably sensing my desperation to get out of the city. And it’s a good thing I made the repairs since the 4WD road to the upper trailhead was rough in a few places. It turns out that I needed fluid to stay in my differential… and in my shocks. Who knew?

I met a few folks with similar plans at the trailhead at 5pm. Some had an attempt at the Creston Peaks in mind, others were to attempt Humboldt Peak, and still others were on a scouting mission for their hunting trips planned for later in the year. The trail started at just under 10,000 feet. It’s an abandoned road walk until the last mile of the 2.5-mile hike. I pitched camp at near 11,500 feet not far below the lower lake. There are a few other camp sites near the lake that are slightly off the trail, either hidden in the trees or in small clearings among the willows. 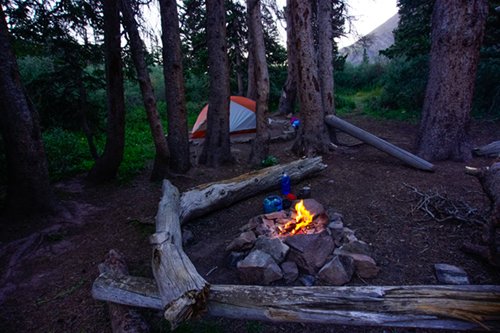 Cooking on the trail. I typically cook (rehydrate) my evening meals by simply pouring hot water into the freezer bag that contains the ingredients. But the problem with high altitude cooking is that things cool fast, too fast for some ingredients to adequately rehydrate. And so, you end up with a lukewarm meal that isn’t fully rehydrated. The solution: a cook pouch. A cook pouch is a sealable pocket made of heat retaining material (like a space blanket or reflective car windshield shade). Placing my freezer bag containing a rehydrating meal inside the pouch allows for slower cooling, and longer cooking (rehydrating) time. The result: I get a hot meal that is fully rehydrated. There’s nothing like a satisfying meal at the end of a trail day. Here’s a DIY video to show you how to do this on the cheap. 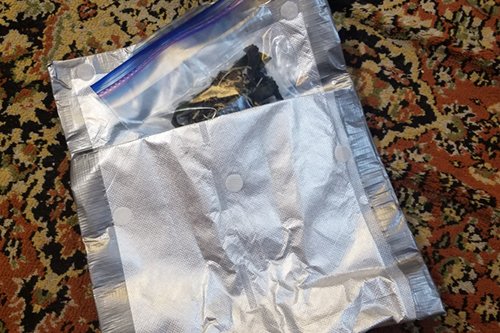 I sipped my chamomile tea next to a small camp fire before calling it a night.

I was up at dawn heating some coffee and enjoying some breakfast biscuits. My feet were on the trail at 7am and in a short while I caught the early sun on Crestone Needle. 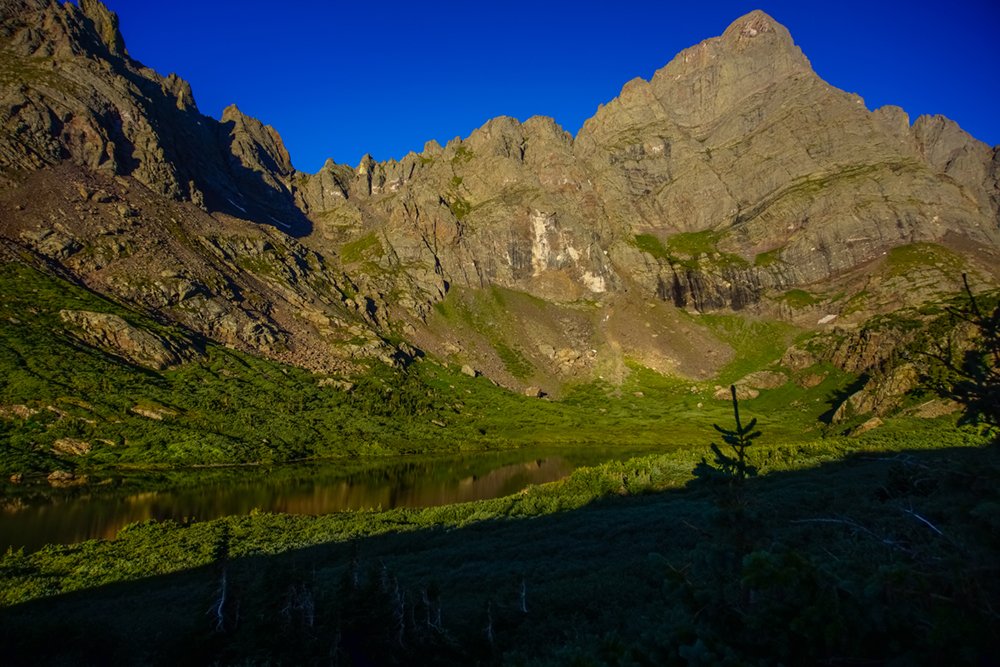 As the trail split to go in one direction up to the saddle below Humboldt and in the other direction to the upper lake, I took the opportunity to refill my water bottles at the upper lake before heading up the hill. From the lake the breathtaking view of Broken Hand Peak and the valley I had hiked up made me pause a few minutes to take it all in. 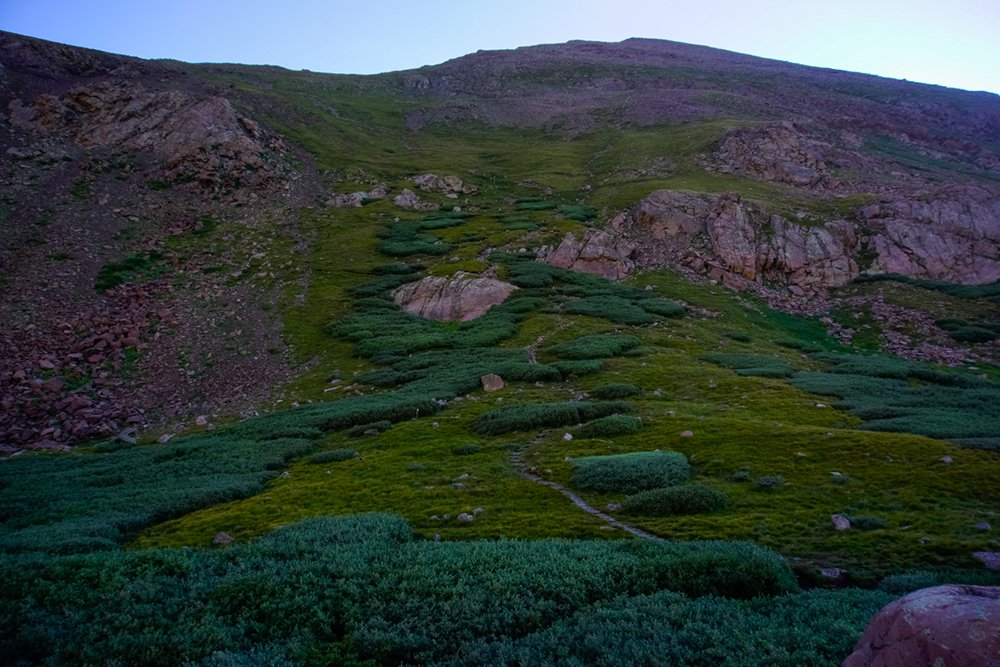 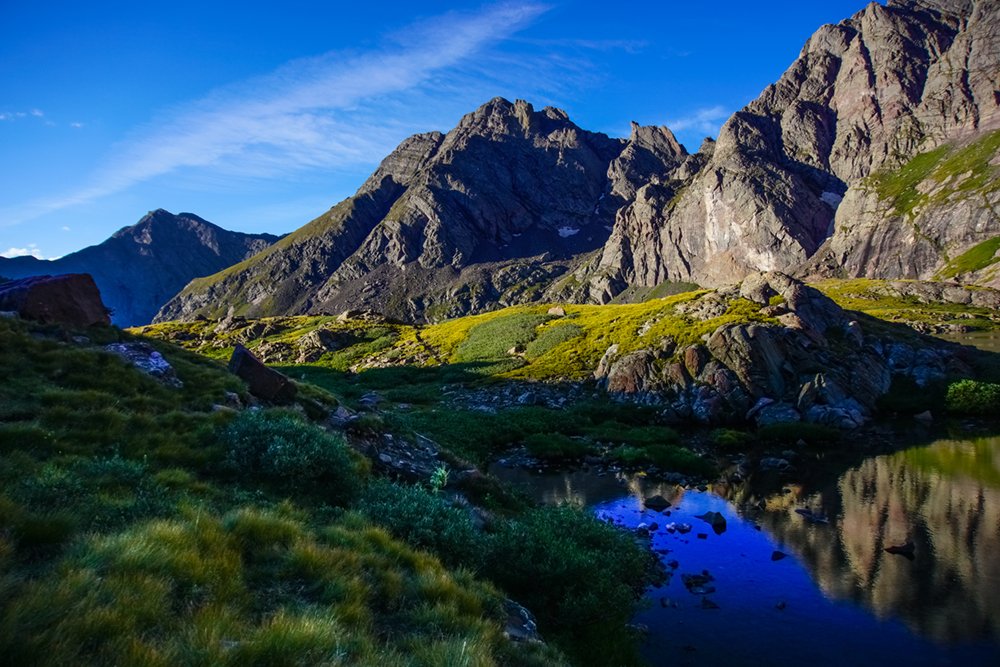 This view shows the path up to the false summit from the saddle. 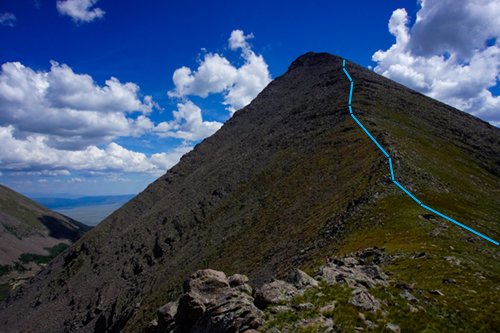 Along the trail to the summit of Humboldt there is one false summit and a fair amount of scrambling. The rock hopping is quite fun. Just so we're clear, when I say "trail" I mean a somewhat marked path through a field of rocks up the side of a mountain. 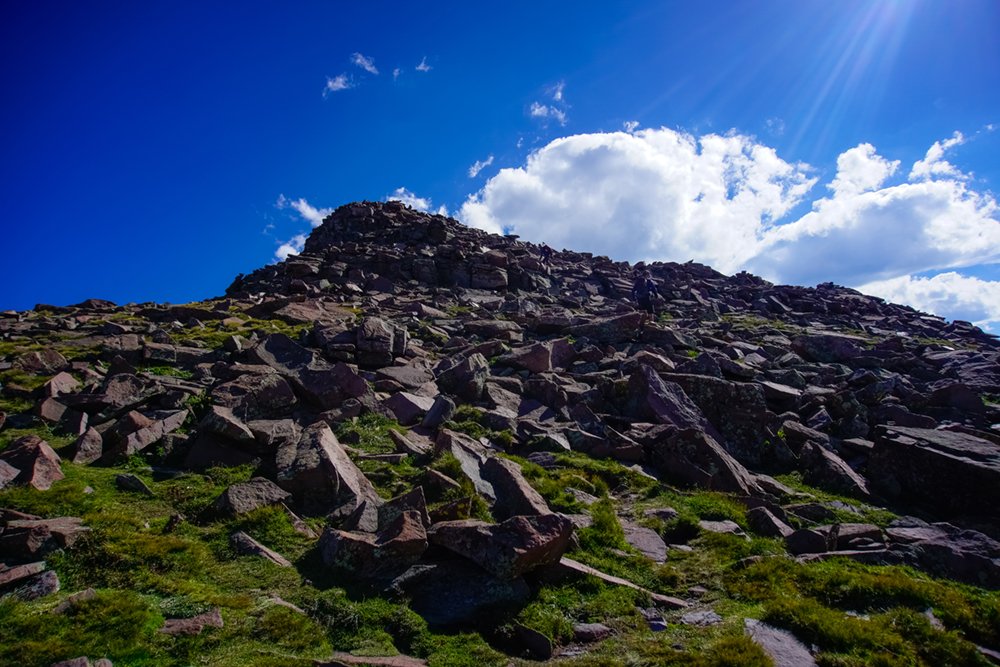 The view of Colony Baldy to the north is also magnificent. 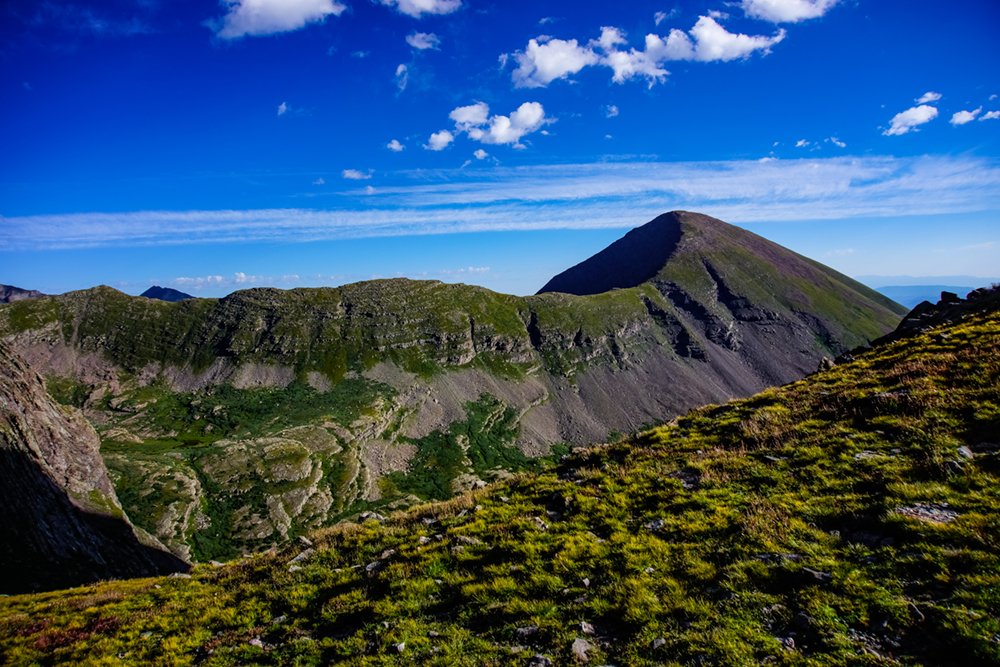 A reasonable amount of cairns marks the way. This picture is looking back toward the Crestones. 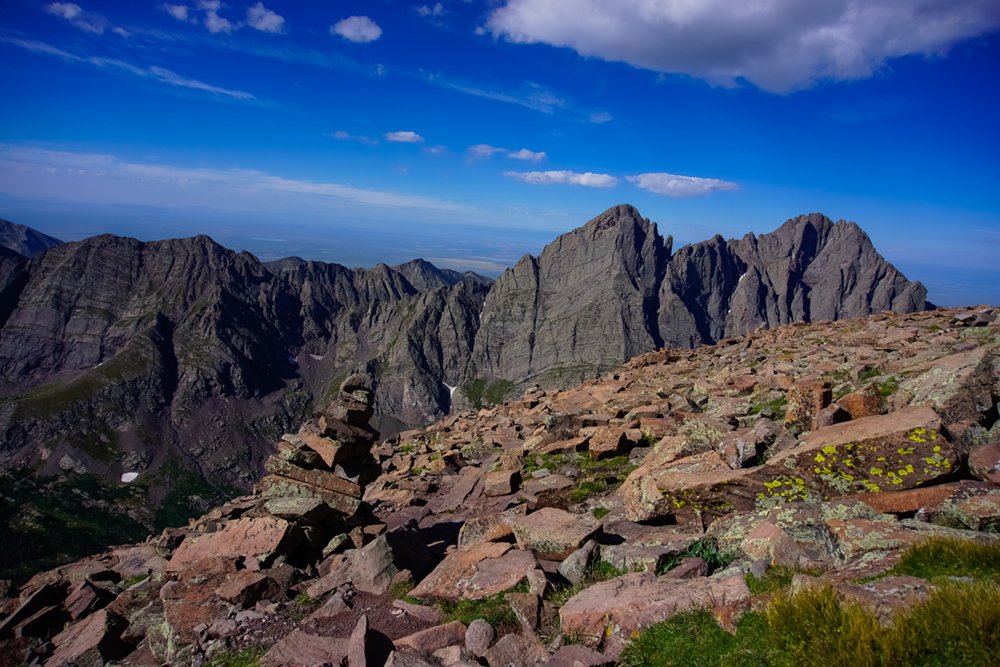 The trail doesn’t actually go over the false summit, although there’s nothing stopping the more adventurous folks from doing that. The trail veers to the right side of the summit then becomes a grassy area with the north east face cliff on the left. Tundra vegetation is tough but delicate; tough because it withstands the harsh environment, but delicate because it's difficult to rejuvenate after it's been destroyed. Plus it provides the scarce food for the animal life that live up here. So, please try to avoid walking on it as much as possible. 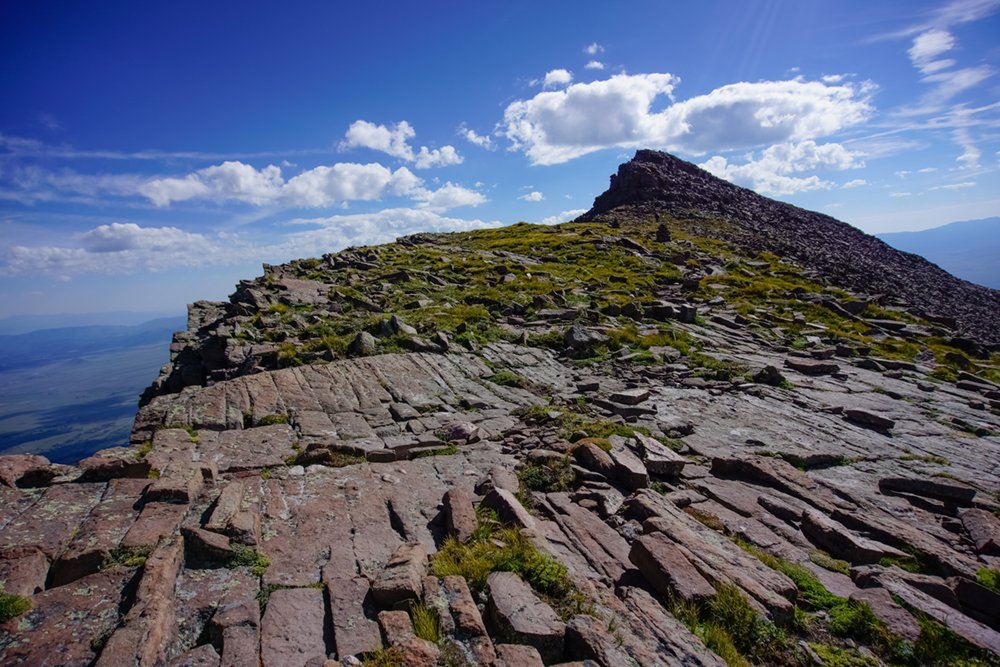 There is some exposure here for folks who want it. I generally don’t, but I moved close enough to the edge to take this shot just for you. 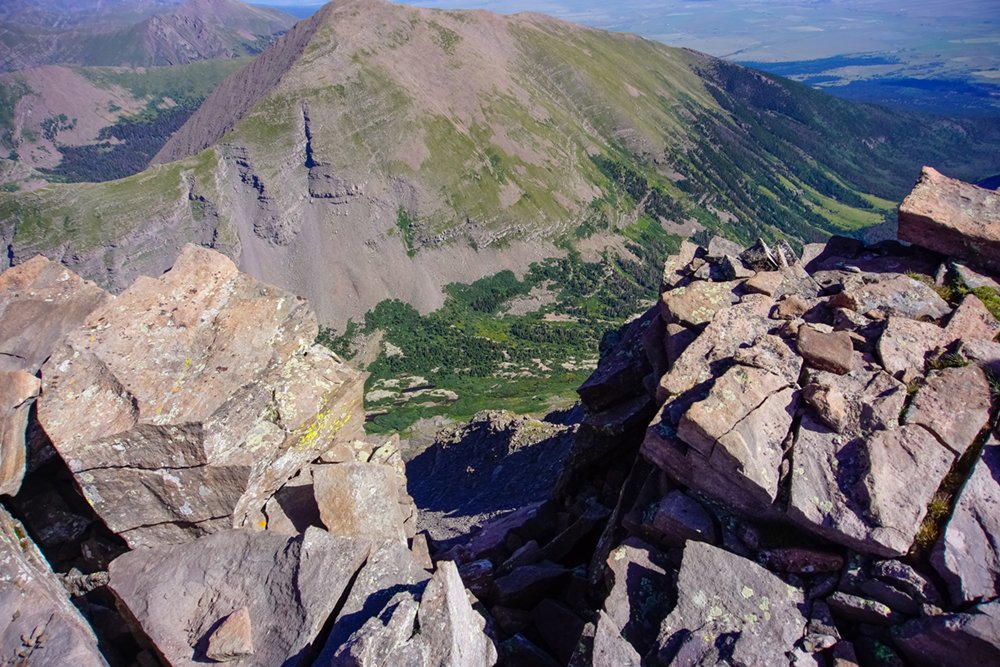 There are a couple rock shelters near the summit. I walked a little further along the summit thinking it was higher, then when I looked back the place I came from looked higher. So, in any case, I was at the summit – shown here with the Crestones behind me. 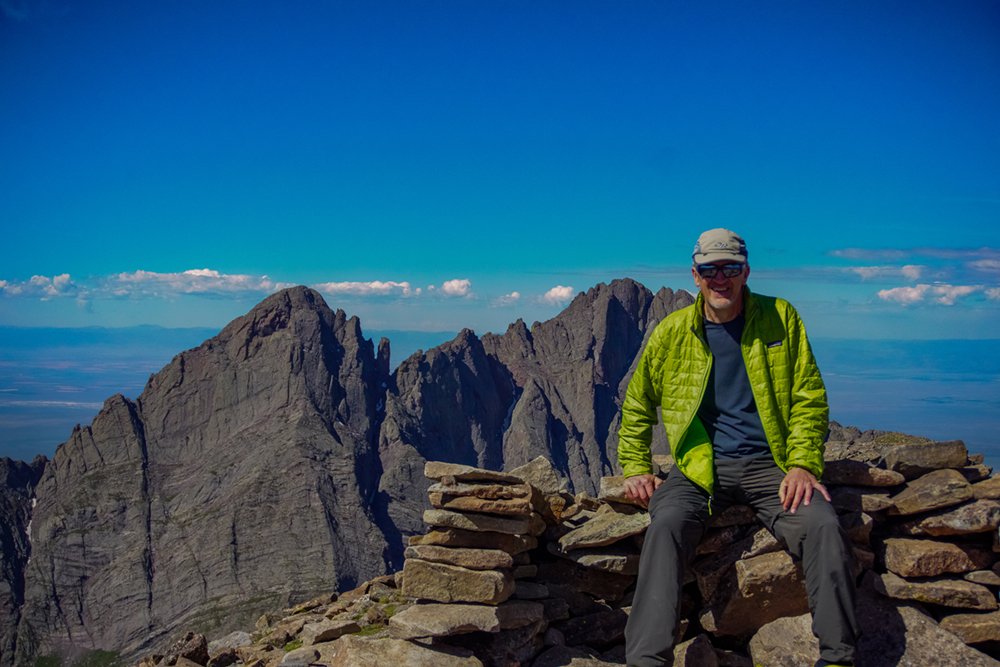 The southern view of the rest of the Sangres is worthy of a good stare.

I lingered on the summit long enough to take a few pictures, enjoy some conversation with fellow hikers, and eat some summit food. Today it was tuna and crackers, complemented by peanut M&Ms.

The down-path allowed for views that were to our back on the way up. 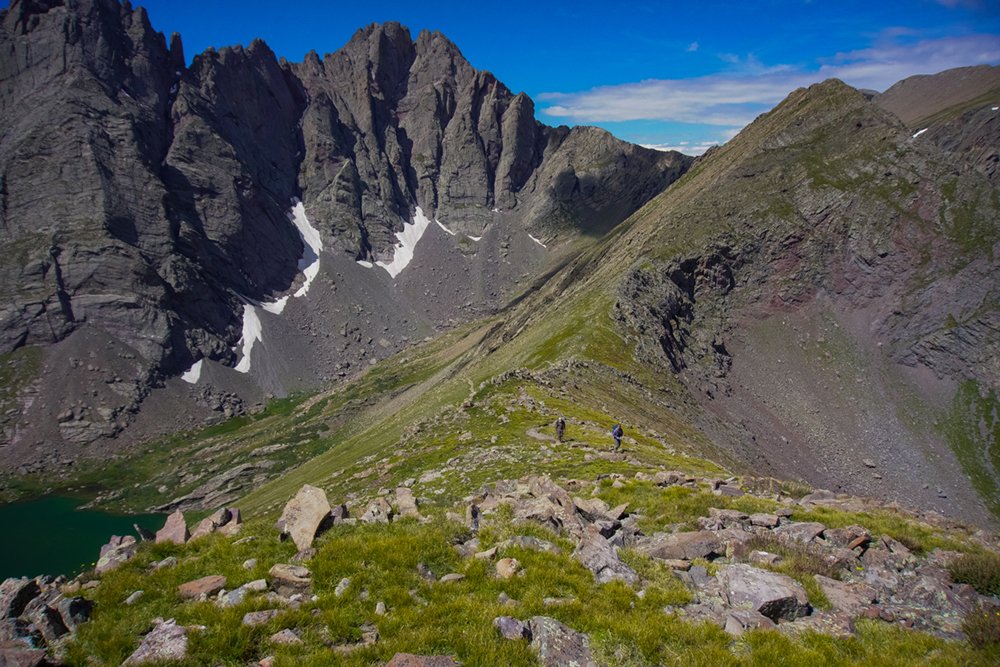 I've shown a couple dozen pictures here. But I don’t want to make all this seem like it's only a place of beautiful mountains. It’s deeper than what my camera can show or my words can express. Call it destiny; call it adventure; call it whatever you like. These places are magnificent, not just because of the scenery, but also because of what it does to the people who spend time here. We are inspired; we are humbled; we become stronger in spirit; we are reminded that our modern lives lack perspective. We find that these places restore our faith in humanity and help us recognize the miracles and goodness around us every day. And I think we all need some of that. Maybe those of us who go here are destined to find adventure so that we can be the best people we can be.

I encourage everyone to step out into whatever adventure you are drawn to so that you can become part of the thing that makes you great!