A Tour of Jones Park - Then and Now

There's one most obvious attraction in Colorado Springs. Pikes Peak. It demands attention for as far as the eyes can see. The summit is a prized destination. One can get to the top of this mountain in a variety of ways: hiking, rail car, or driving. In the early days of the city there was only one common way. Before there was Barr’s Trail, the Cog Railway, or the highway up to Pikes Peak there was a different trail, the Historic Trail.

The Historic Trail started at 26th Street and High Drive to Josephine Falls along Bear Creek, connecting with Captain Jacks Trail through Jones Park to Lake Moraine and the Dead Lake area. It then went up to Windy Point and on to the summit. The Bear Creek portion of the trail was initially a path created by the native Ute tribe and in 1874 the US Army used the trail to create a weather station on top of Pikes Peak. The trail was 10-feet wide all the way to Seven Lakes at the base of Bald Mountain (Almagre Mountain). It was a mule ride from there to the summit.

This was the trail Katherine Lee Bates took to Pikes Peak in July of 1893, a trip that inspired the writing of America the Beautiful. Jones Park is along that trail. All you hikers may be disappointed to know that she didn’t hike the trail, she rode in a wagon with a team, renting both for about $2 and also paying a 50 cent toll. The sign on the back of the wagon read “Pikes Peak or Bust” an adopted phrase from the gold rush miners who had traveled to the area 40 years earlier.

Jones Park has a unique history during the late 1800s. This was the period immediately following the Homestead Act (1862) when it was easy to acquire large plots of land for nothing or at a very low price.  And since it was along the route to a popular destination it presented opportunity for the entrepreneur. Hotels and rest points were being built along this route for the many tourists seeking to scale the mountain.  Also, by 1881 the Ute Indians were forced out of the area to Utah, and so the unrest between the new American settlers and the natives was no longer a point of concern for those wanting to freely tour and develop the area.

Several homesteaders settled the area with hopes that the rumors of a railroad soon to be built would bring them their American dream. People by the name of Irvine, Lindsay, McDonald, Lavigne, Morris, Senkapaul, Hale and Corliss were among the first to make their claims. Joseph Jones (1830-1882) was one of those opportunist. He came to Colorado as a prospector during the gold and silver rush of 1859. He built the first log building in 1873 in a place that would eventually take his namesake, Jones Park. It was part of his plan to build a thriving business with a hotel, restaurant, and opera house for those on their way to Pikes Peak. What Manitou Springs later became is what Jones envisioned for his plot of earth. Participating in the Homestead Act, Jones paid $200 for his parcel. 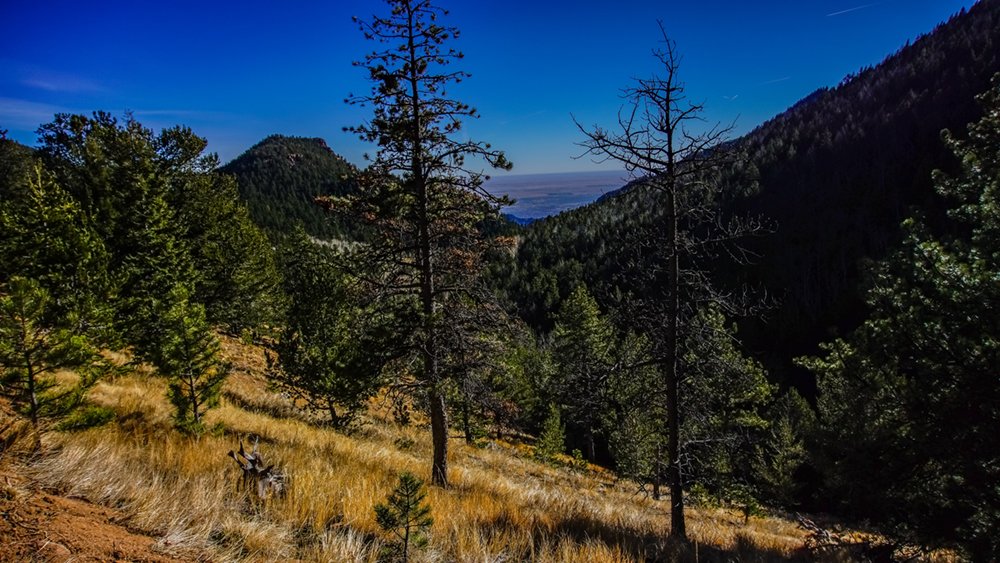 Looking east from Jones Park - Mount Kineo on the left

There are reports that Jones was a “tall fierce looking man” with a “wild look in his eyes” proclaiming to be the “greatest man in all this region” and the “first to discover gold in the Rocky Mountains”. He did manage to fulfill part of his dream by building his log house, gardens, fishing ponds, and bird houses but that’s about as much as he was able to achieve before his passing in 1882.

It was Jones who is credited with unknowingly saving the Greenback Cutthroat Trout when he had a few of them captured and planted in his ponds. The species still exist in Bear Creek.  More on that later.

Five years after the death of Jones it’s 1877. Edward Tenney (1835-1916) is the President of Colorado College in Colorado Springs. Tenney was also involved in housing developments and he owned property adjacent to the Jones plot. He recruited Frank Loud (1852-1927) to come out from Boston to be the first head of the mathematics department at the college.

Loud has a long list of accomplishments to include working with Nikola Tesla on his project to blast radio waves to space and then listen for answers.  Reportedly Tesla heard aliens respond. The event was dubbed the “Mars signals”. The media promptly ridiculed him and his discovery, even back then. Make your own judgement. It was enough for Tesla; he moved back east for his next adventure in discovery.

Here are a couple other less juicy items about Loud:

Loud and Melvil Dewey were classmates. Remember the Dewey Decimal (Classification) system that we use in our public and school libraries? Yes, that “Dewey”. He first published his system in 1876. So, fresh off the press, Loud used the Dewey Classification system to set up the library at Colorado College.

Loud was a mathematician. With no experience in astronomy, he set up the Wolcott Observatory at Colorado College after obtaining a telescope and coaxing some astronomer friends to come out to Colorado for the 1878 solar eclipse where it could be best viewed. He is also the founder of the Colorado Meteorological Association. In 1903 he set up a lab to provide photography from a telescope using the special Cooke lens. That venture had an unfortunate and abrupt ending when the caretaker, Lew Warriner, lit the place on fire with coal oil then shot himself. Space photography is a rough business. Notice this article has no celestial shots. You're safe.

Point 1: For those who have made a career in space technologies in Colorado Springs, you have Mr Loud to thank.

Point 2: Scrap the resume’ and connect with some influential people. Apparently anyone can do great things even without experience… or even some negative experience. 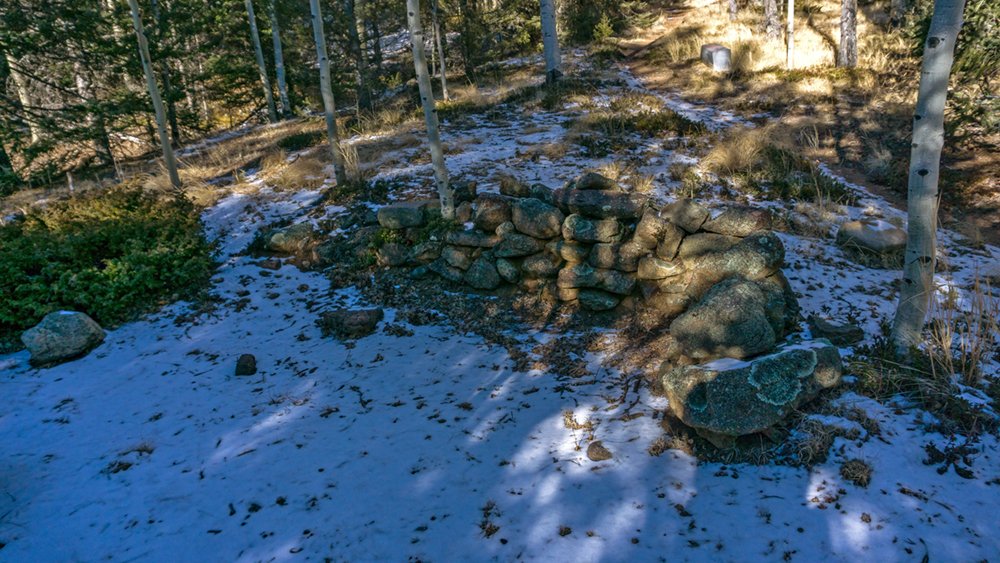 Loud had purchased 108 acres north of the Jones parcel in 1884 for $147. He built a 16-foot square log house that was later destroyed by a snow slide. The picture below is believed to be the location and remaining foundation. It is located west of the Chipmunk Lodge (see below) not far along the creek, right next to the trail.

In 1902 he built a new cabin and called it the Chipmunk Lodge (Loud's Cabin).  See below.  He also built two other cabins, one burned down and the other lasted until around 1960.

Here is a quick video of a hike to "Loud's Cabin" I took with my daughter and grandson: 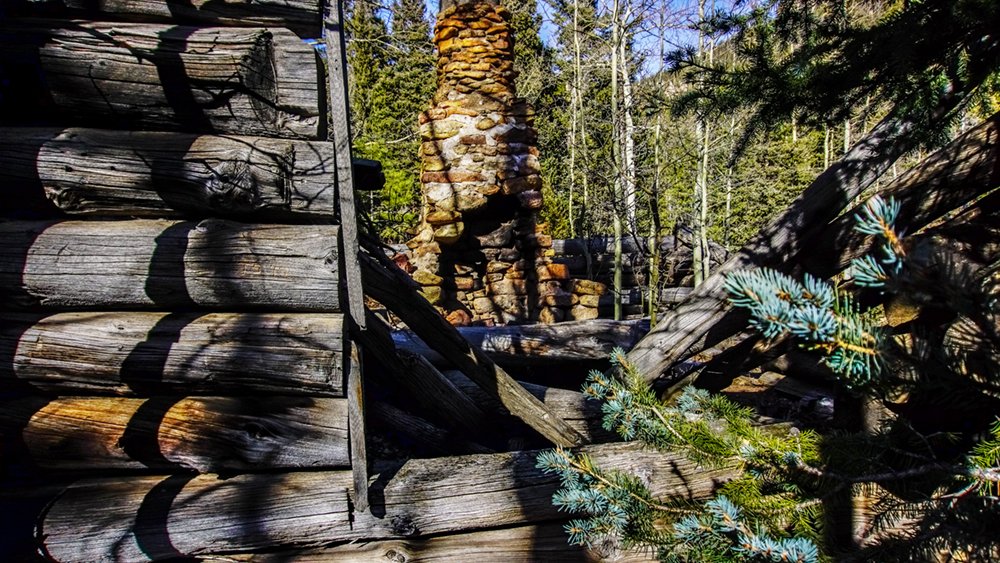 Well, it was after the death of Jones that his estate sold for $400 to Alwyn Partridge (1848-1931) who had also worked for Tenney at Colorado College and had graduated from Amherst College two years before Loud.

It turns out Tenney was forced to resign as the President of Colorado College in 1885 because he defaulted on payments for a housing development on the “North End” of Colorado Springs along with his parcel adjacent to Jones Park. History never forgets, but it often forgives. Tenney’s Crags, north east of Jones Park was named after him (see pic below). Unlike what the current social climate might have you believe, it seems faulty people can still be honored. 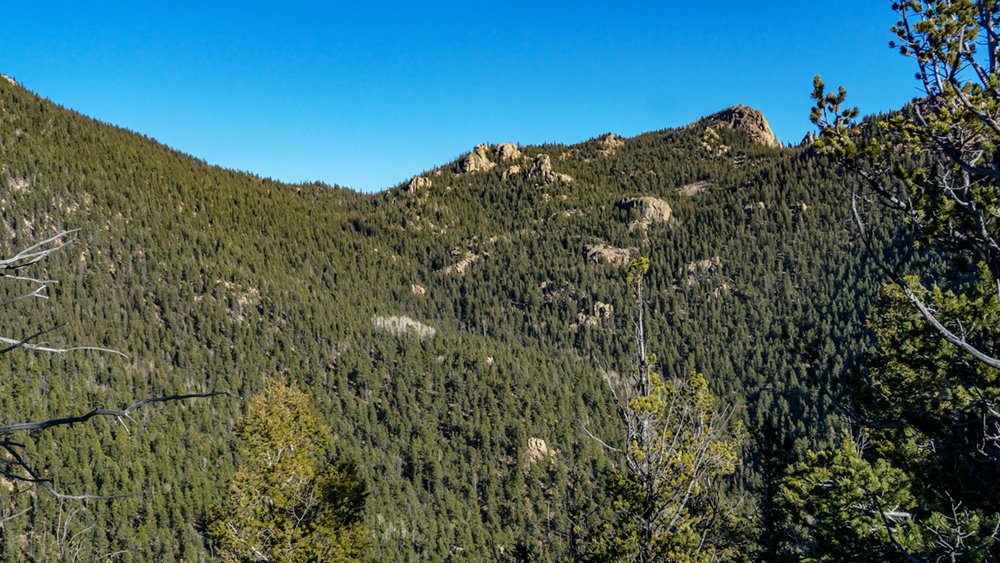 There are several other homestead finds in Jones Park. This is a site east and within sight of Chipmunk Lodge that was once a 1.5 story cabin where once John “Fez” Bryant (1908-1974) practiced his jazz tunes. He worked for the Colorado Springs Music Company, playing at Shakey’s Pizza Parlor, which is still in business today. 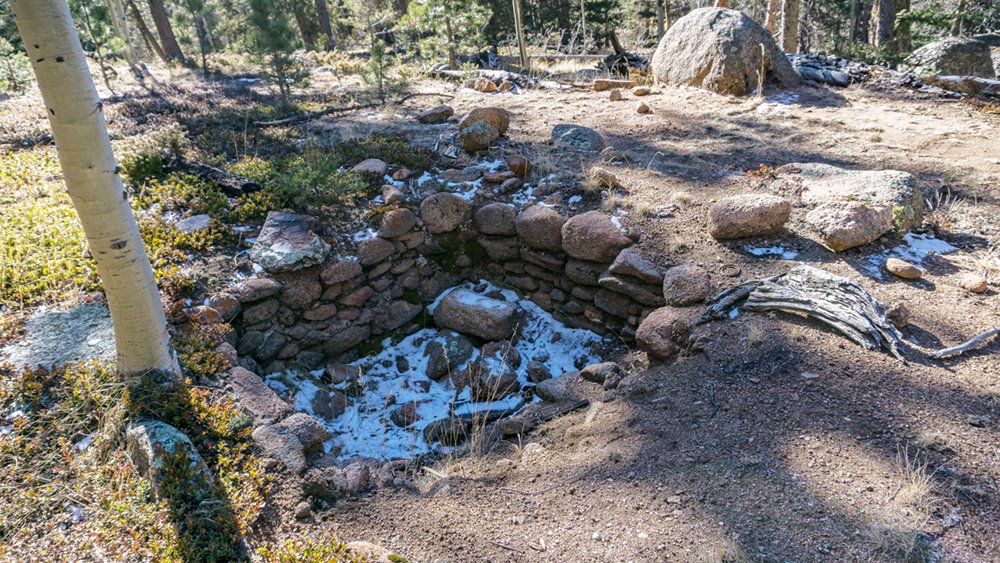 There are other sites further up the creek from Chipmunk Lodge, ones I have yet to identify. Maybe another time. These old dwellings are mysterious to me. They are full of untold stories, happy and sad, good and hard. They are reminders of lives lived in different times. They are monuments to those who came before us, in whose old paths we walk, and who in many connected ways have secured our great inheritance of these wild places. For these reasons, I believe these sites are to be preserved for their sacred contribution. 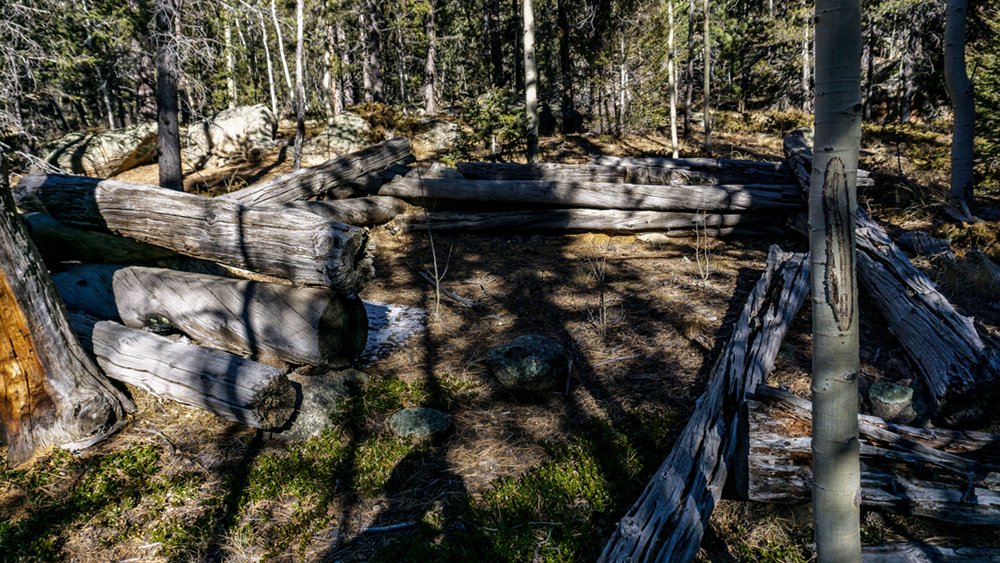 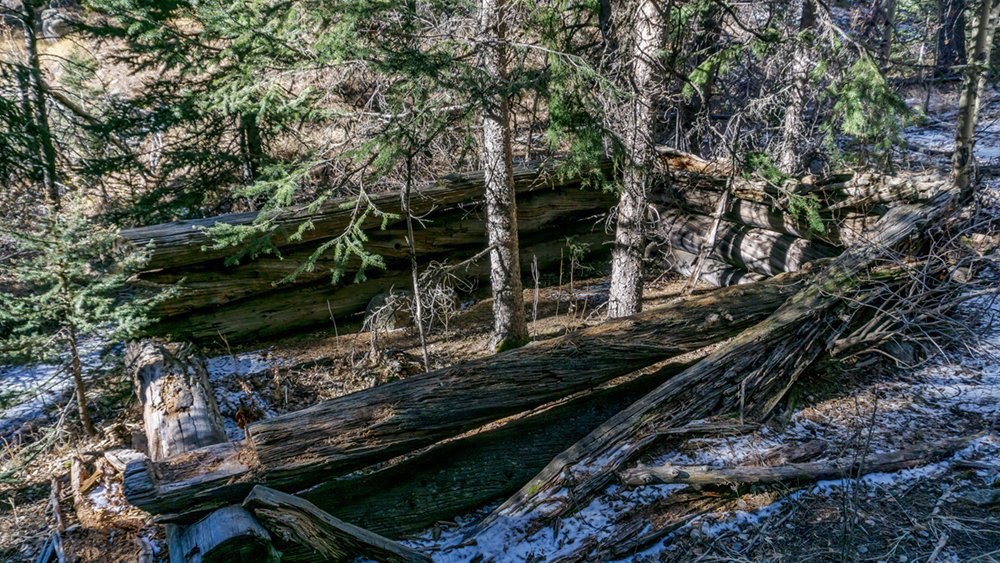 Both of these shots were taken from Mount Kineo over a century apart. 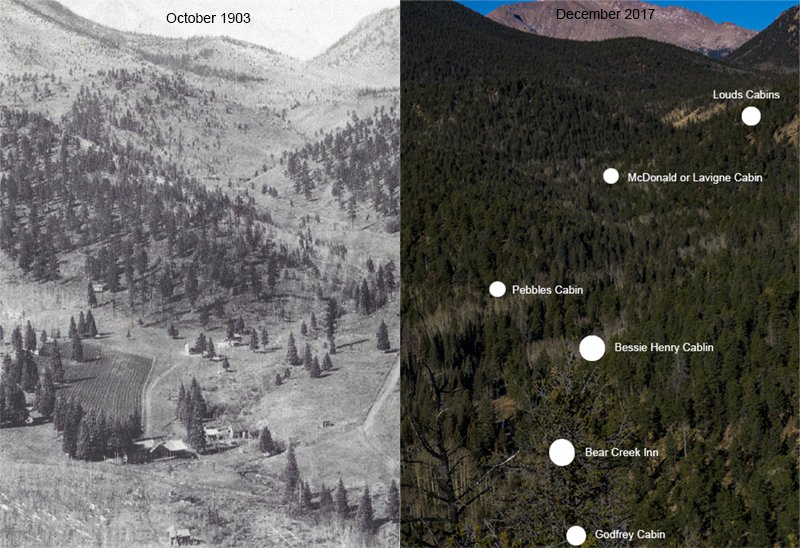 I won't go through much detail of my trek into and through this park except in general terms and to highlight a few noteworthy items. 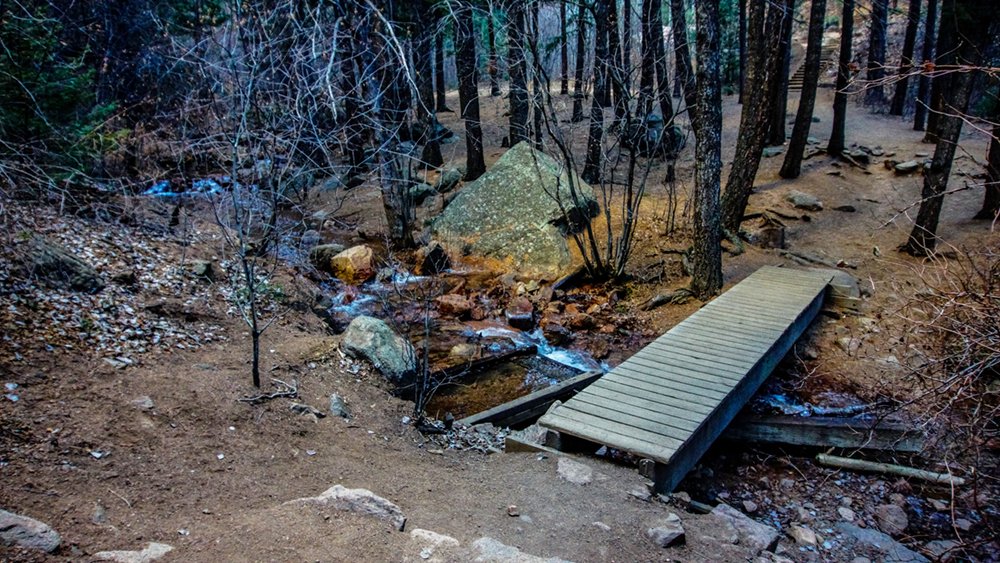 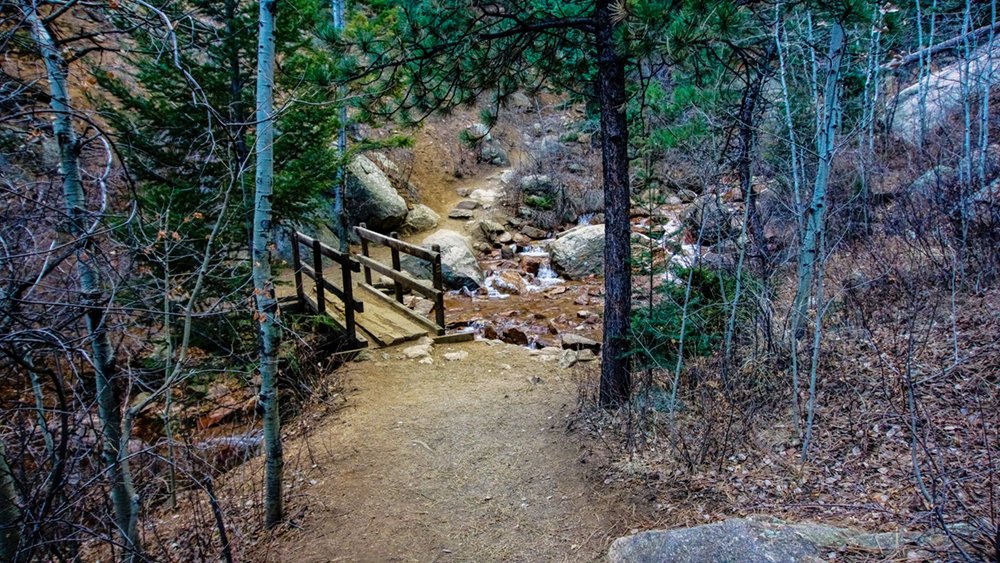 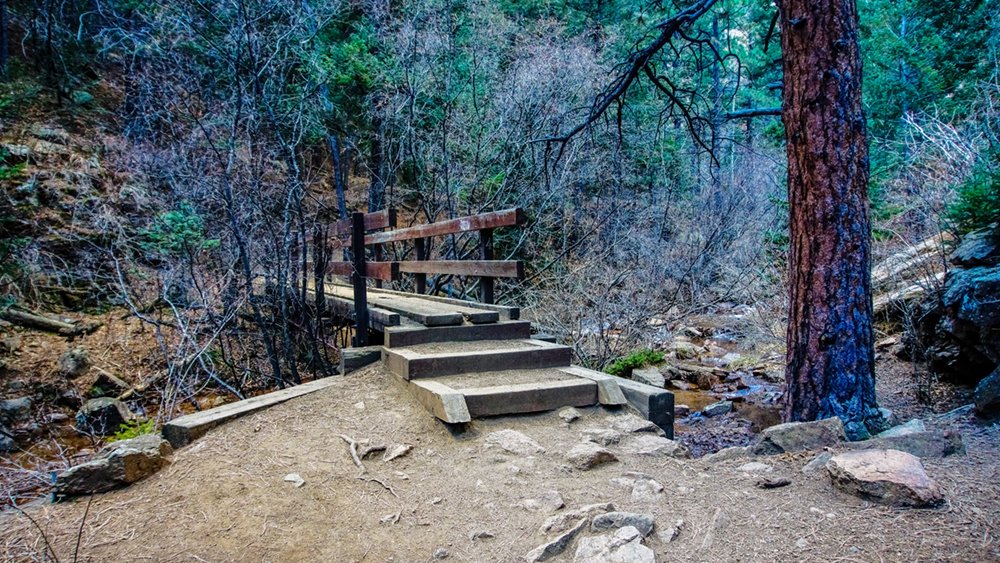 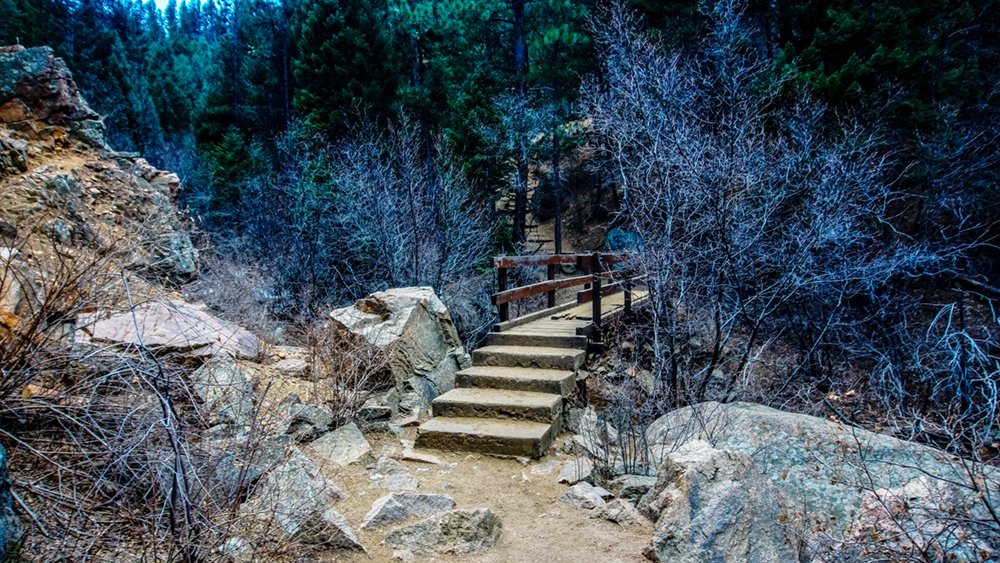 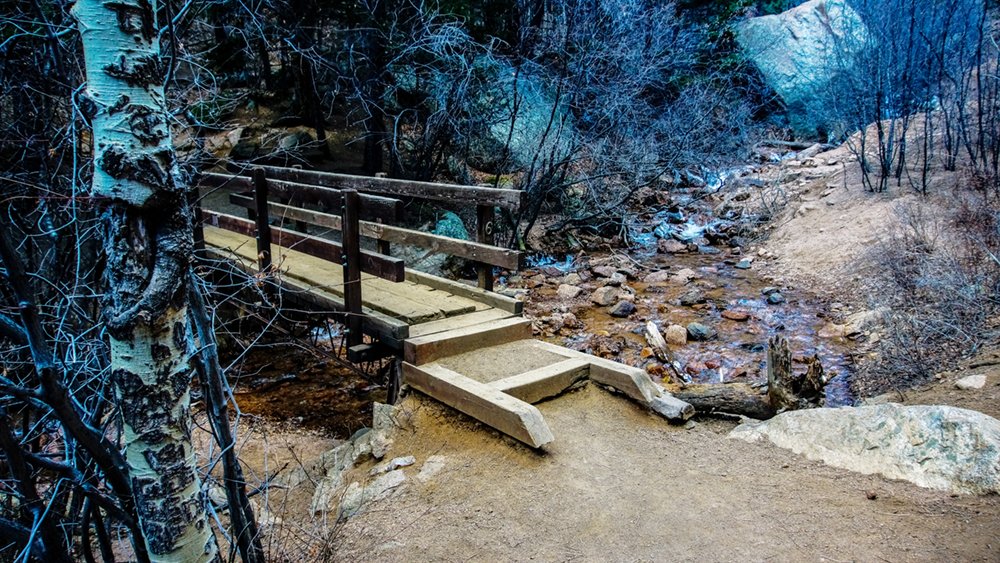 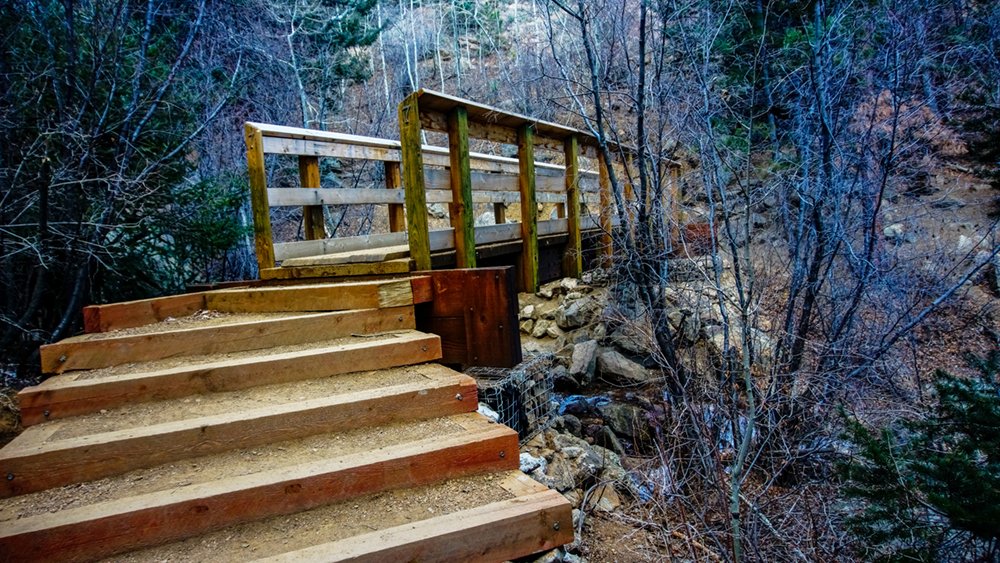 After the bridges is a destination for some: Undine Falls. I didn't stop to take a picture - just kept climbin' and soon crossed a scree field.  Looking back is a nice view of Colorado Springs. 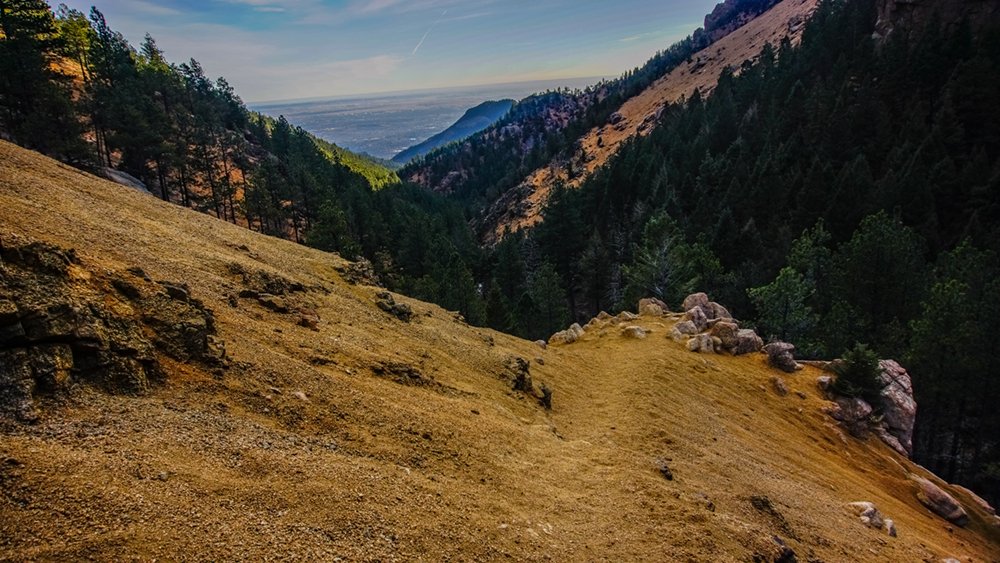 Two miles up Seven Bridges Trail is the edge of Jones Park in a slowly slopping meadow of quaking aspens.  This intersection offers a couple choices, connecting with different trails in the Park. 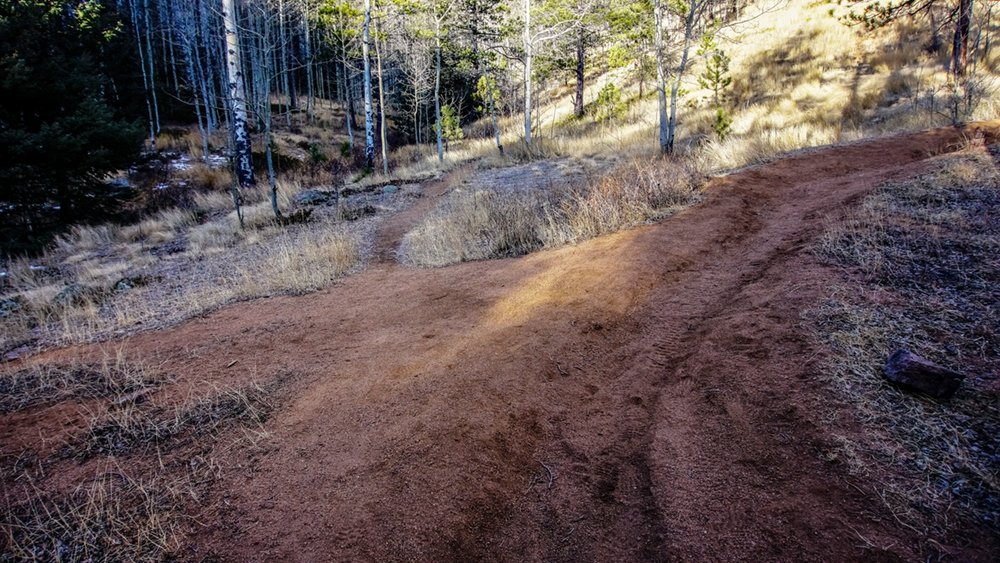 To the right is trail 622a and straight is a connecting trail that leads to trail 668, Ring the Peak Trail... which doesn't yet actually go all the way around Pikes Peak, but plans are to connect that last segments in the coming years. At the top of 622a is where an unmarked trail leads to the summit of Mount Kineo. 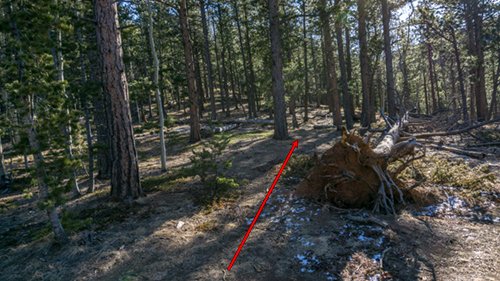 Check out my video of how to get to Mount Kineo:

Any map older than 2016 will surely confuse anyone trying to find their way through this area. The Bear Creek trail running parallel to the Bear Creek watershed was decommissioned in 2016 in an attempt to save the Greenback Cutthroat Trout found in the creek, formerly believed to be extinct and believed to have been originally planted by Jones in his ponds up stream.  So, the forest service rerouted the traffic to trail #667, Cap'n Jacks Trail, along with rerouting some of the interconnecting trails. So if you are wondering these parts, be aware that the trail layout may be different than your map.

I did take a little time out to set up my Zpacks™ Duplex Ultralight Two Person Tent.  Pretty sweet! The primary material is Cuben Fiber and it weights only 21oz!  I plan on doing some long hikes with it soon. 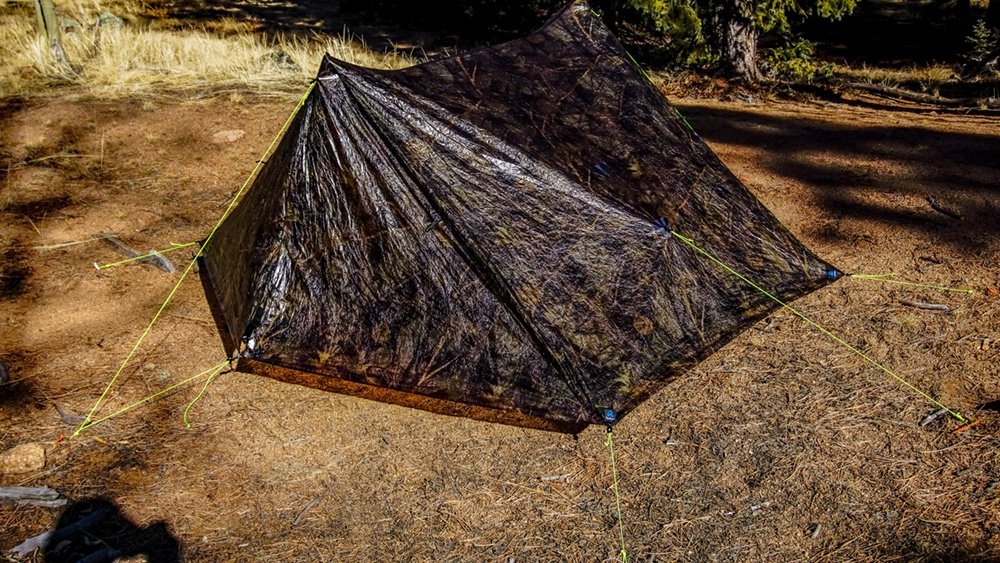 I've also been experimenting with my Vargo Triad Multi-Fuel Stove

. It weighs in at 1oz.  And the Vargo Alcohol Fuel Bottle

holds 8oz of fuel which is just right for a 4-5 day camping trip for me, as I would typically only use it to heat up less than a half liter of water per day. Some folks use isopropyl alcohol, which works fine, but some tests prove that HEET Gas-Line Antifreeze and Water Remover 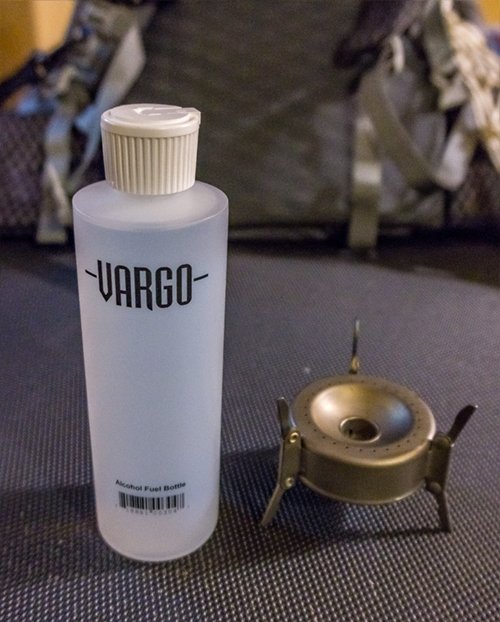 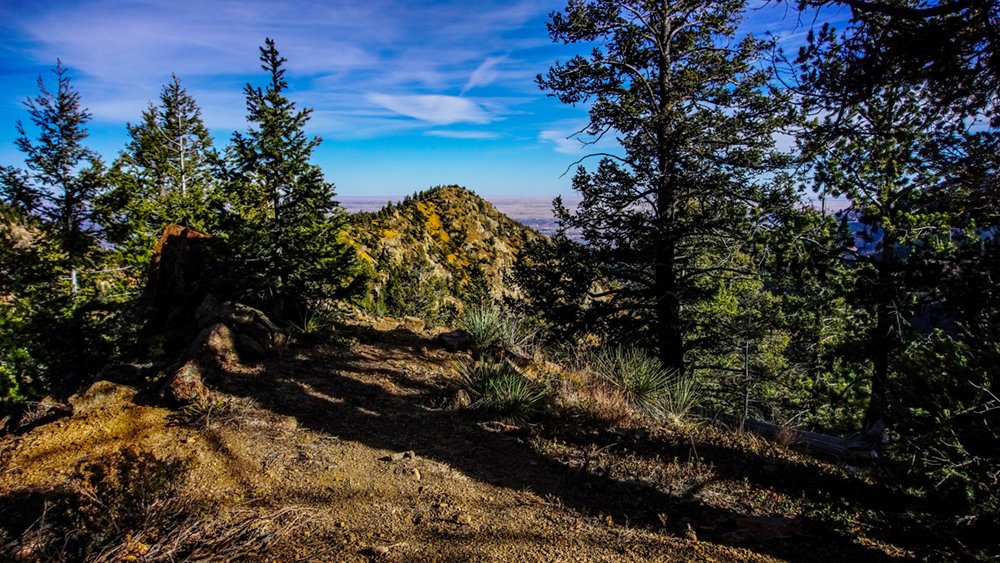 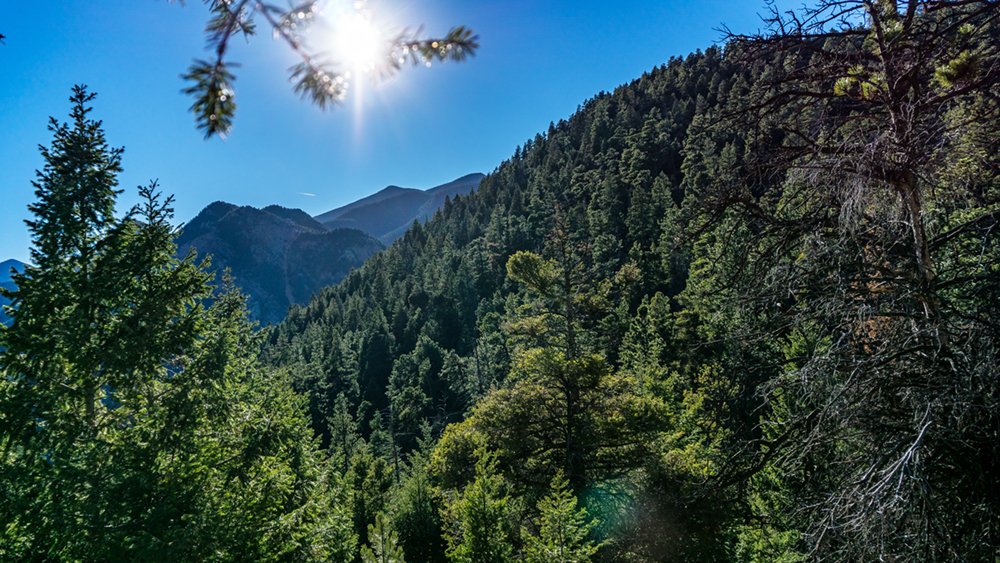 I've put nearly 30 miles into exploring this area and I'm looking forward to exploring much more.  So, until next time... happy trails!