Chalk Mountain sounds a little wimpy, weak even. Sorry, George Wheeler – not a fan. Not for this reason, but in the late 1800’s surveyor Henry Gannett changed the name of this prominent Colorado peak to Mount Princeton. He was a Harvard man. Loyalties aside, why to go Henry! You gave us a destination name worthy of a 14er climb! 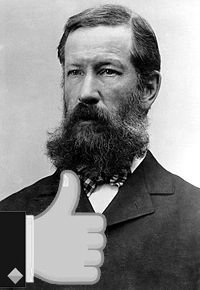 To Mr Wheeler’s defense, calling this mountain “chalk” was in reference to the kaolinite cliffs on the south side of the mountain that resemble the consistency and color of chalk. It’s actually a very interesting and unusual geological formation in Colorado. No matter for this conversation.

Mount Princeton is the southern most of the Collegiate Peaks in the Sawatch Range. Others among them are Mounts Harvard, Columbia, Yale, and Oxford. There are 19 named peaks in this group. But don’t look for Princeton in the Collegiate Peaks Wilderness Area, silly. It’s just south of the wilderness area in the San Isabel National Forest and approximately 8 miles south of Buena Vista. It’s quite obvious from Colorado Highway 285. It’s that big, in-your-face rock right in front of you. 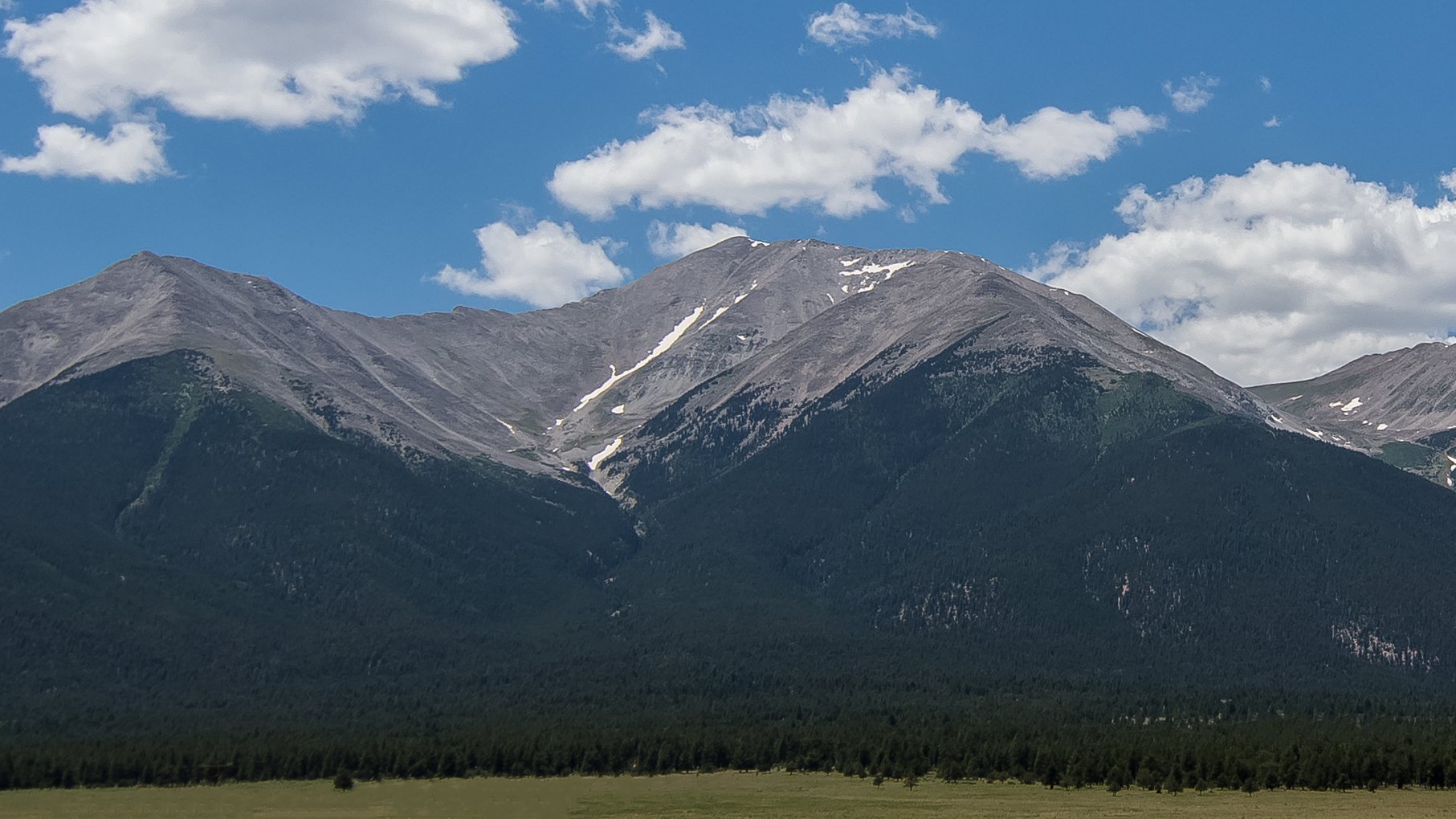 It’s a teaser for those climbing the Sawatch, because it is such a dominant feature in that area. But this climb, although not the longest or highest is somewhat of a commitment due to the terrain. There is no easy or fast way of coming down off the mountain should you encounter bad weather while above tree line. A person could comfortably run down some of these peaks, but not so much with Princeton. There is talus, and lots of it, sharp and unforgiving. Should a person not be watching closely for dark and unfriendly skies, lightning could very easily ruin an otherwise perfect day. That’s what became of Catherine Pugin, a seasoned climber, in 1995. A plaque honoring her at the spot of her death by lightning is a sobering reminder to take all of this danger-talk seriously. 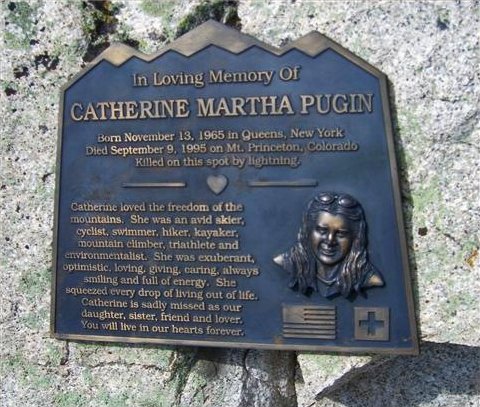 According to the Chafee County Citizen Emergency Preparedness Guide and other sciency sources, here are some lightning fun facts:

OK, enough of the downer talk. On with funness! [how many non-words can I use today?]

From the official trailhead parking lot immediately to the right of the Young Life Camp entrance is the beginning of a narrow 4-mile 4WD road walk to get on what I would call a hiking trail. But for me happy hiking is not on a road. I opted to drive my Jeep up the road 3 miles to some popular dispersed camping spots near a few cell towers. There are no parking spots where the trail cuts off the road one mile farther up, so hikers are encouraged to park further down the road.

Because this road is so narrow, strategic and smart thinkers are welcome. It takes some creative thinking to maneuver two vehicles going opposite directions here. To reduce my chances of meeting an under-developed road hog in an obscenely over-sized dually 6-pack truck on a road designed for a vehicle half the size, my plan included a late Saturday afternoon drive up the road when most Saturday hikers had already left the area. And I would depart on Sunday afternoon when traffic up the hill would be very light. The plan worked. Be impressed.

I arrived at the towers around 5pm, hung my hammock for the night’s rest, heated up some dinner, and prepared my pack for the next day before enjoying a campfire with my new neighbors and friends. I would spend much of the next day with these good people. Other adventurers were sporadically arriving and joining the group well after I crashed just after 9 pm. It would be 1am before all was quiet. 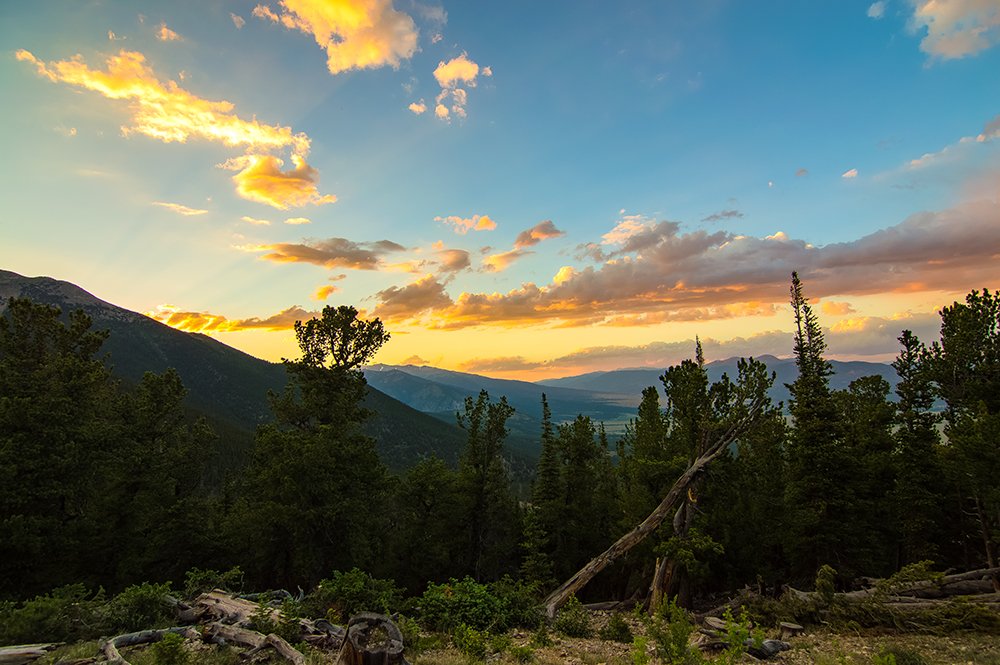 I was up at 4am for a 4:45 start. The sunset the night before was typical Colorado orange and blue clouds against a mountain skyline. The morning sunrise brought similar colors against clear skies. It was going to be another bluebird morning in the mountains. 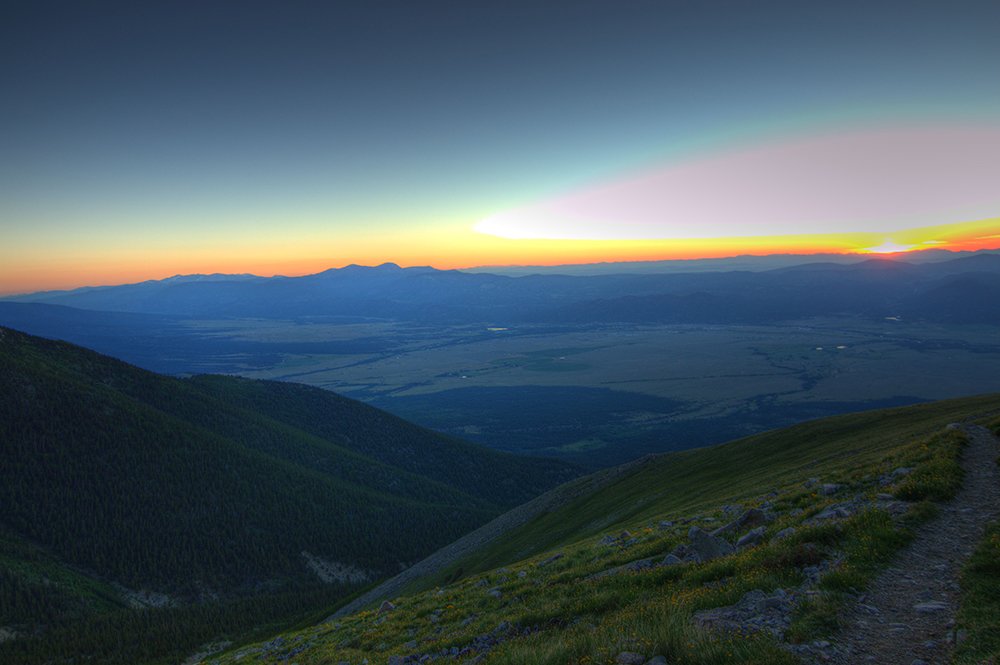 For those planning to summit Mount Princeton it is important to note that only a short segment of this trail is not talus or scree. So, it’s not a hike for those who dislike traversing rocks all day. The good news is that most of the talus is solid, which makes for a rock hoppin’ good time. I happen to love rock hopping. There are those who don’t. So, this was a great day for me. I’m pretty sure Sara (one of the good folks I met the night before) called me a goat on the way down. Rock hopping for 2.5 miles up and rock hopping for 2.5 miles down. For as fun as rock hopping is, trail finding among a pile of rocks is not always obvious. Cairns mark some of the trail, but it’s not great and I imagine it might be even more difficult for those who want to hike in the dark for a sunrise summit. I met a few of those coming down while I was going up. Of course, just blindly going up is always an option, although count on it being more strenuous.

The scree area toward the top, where the trail has been worn to tiny marble-size pebbles of granite, will unfortunately keep getting worse until it gets a little TLC from the very long list of trail segments that need maintenance. The trail maintenance on these mountains is primarily the work of volunteers. Go to Colorado Fourteeners Initiative to help out. There is a ton of work to do.

The first segment of the trail after getting into the talus is the north slope of Tigger Peak, a 13,300 ft peak that I’m told is worthy of the climb. I should have grabbed it since it was such a nice day. I didn’t.

After reaching the saddle between Tigger Peak and Mount Princeton it’s a steady but picturesque 900-foot vertical climb to the summit.  The view of Mount Antero and the rest of the Southern Sawatch is in full view from here. 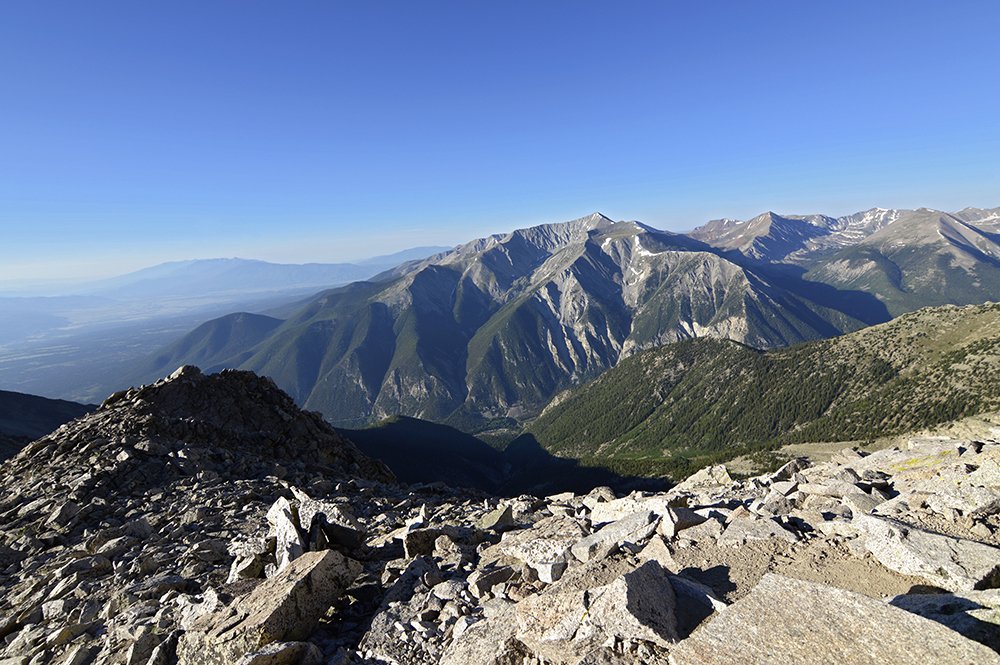 Mountain safety tip of the day (other than “don’t play with lightning”): please, come prepared. It was just shortly after this saddle on the way down we encountered a man whose wife had continued to the summit as he stayed behind, too tired to go any further. He had on shorts and a tee shirt, a 500ml water container half empty, no sunscreen, no other cloths, no emergency gear, and no hat. He complained about being cold in the wind and tired. We had him put on some of our sunscreen. We offered him more water. We asked him about altitude sickness symptoms. He said he would survive. My response was, “that wasn’t the question” to which he had no reaction. We gave him a vitamin B supplement to help relieve muscle aches and to boost his energy. We should have insisted on escorting him down the hill – he refused any more help and seemed a bit unhappy with his wife. It turns out that she told him it would only take her an hour to summit and come back. At her current pace, we saw her earlier, it probably took her twice that amount of time. We told him as much. We did what we could, but felt concerned about him the rest of the way down to camp. I hope he “survived”. The lesson, obviously: enjoying the high-country happens best when one prepares for it.

On the summit, the entire Sawatch Range can be seen, as well as the Arkansas River Valley from north of Buena Vista to Salida. Most of the immediate peaks surrounding Princeton are unnamed 13,000 ft mountains.

Look at these views! It was a fantastic day with good company and fine weather! This was my 24th different 14er summit in Colorado. 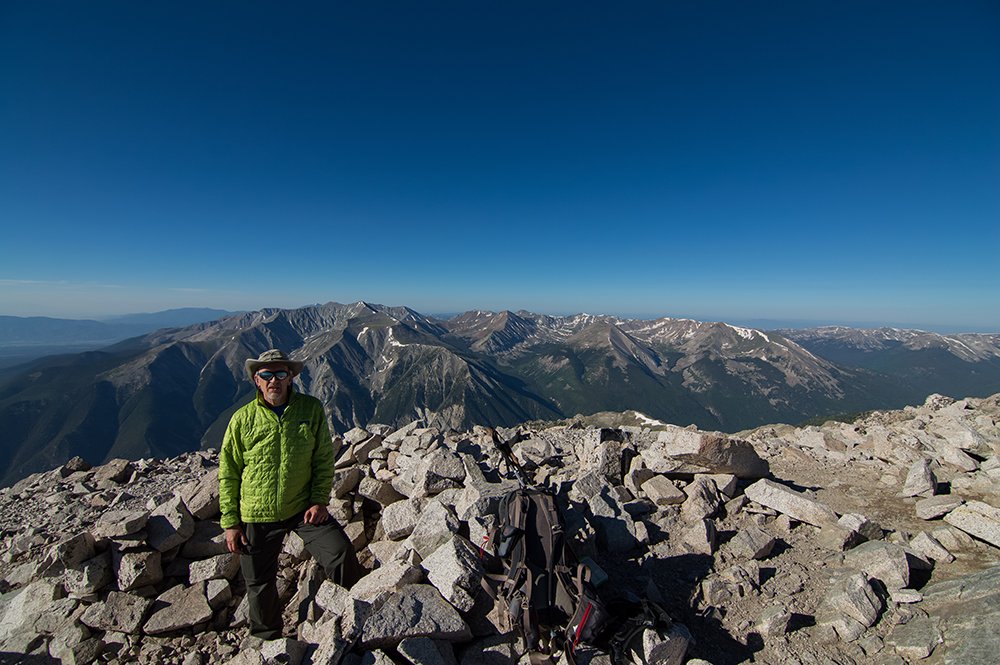 I met other great people that day. A guy with a purple Mohawk haircut was known by at least one other person on the summit that day as one who carried a homemade Mount Bierstadt street sign to the top of Mount Bierstadt. (Here’s a guy who could use a review of lightening safety).

I also met a guy who was thru-hiking the Colorado Trail. He decided to take on a 14er too. What not? He was maintaining 22 miles per day on the trail and hoped to be done in a few more weeks; it's 486 miles long from Denver to Durango. One in our group suggested he take advantage of the 25 cent per minute shower services in Buena Vista. He thanked her for the advice. It occurred to me that a person receiving that advice at any other time or place might not be met with the same level of gratitude. Live in the moment. That’s one of the things that is so great about adventurers.

Did I mention that I don’t care for road hiking? Well, it so happened that the mountain angels were with us that day. When we reached the road on our way down we were offered a ride in the back of a (small) pickup truck to our camp. What an absolutely perfect ending to a summit hike of Mount Princeton!!

The crew I hiked with went on to have a late lunch at a popular Buena Vista restaurant. I drove 2 hours back to my house in time for some homemade Posole in vegetarian stock with shredded cheese, sour cream, and fresh greens from the garden.

Life is good! Hike on!