The Most and Least Significant

I lived in Turkey in the late 1980s while on assignment as part of my U.S. Air Force career. After that experience, I became firmly entrenched in the belief that it would do the world good if more citizens would spend time living in a different culture.

When I say living in a different culture, I’m don’t mean just visiting as a tourist. I mean actually living among the people. Eat their cuisine. Learn their language. Hear about their life experiences. Listen to understand world events from the mind of someone who has a different background. Live and survive on their economy. Become an active participant in their way of life for an extended period of time.

What benefit does this kind of excursion offer? It inevitably develops a level of understanding that can only be gained by seeing the world from a wholly different and equally legitimate point of reference. Purposely and literally standing in the shoes of someone with a different life experience opens our minds and hearts to appreciate and respect other people. We gain empathy and assign greater value to other humans around the world. It reminds us that we are all part of the human race with more in common than perhaps what we had previously believed.

It had been over 30 years since I had been in another country, until recently. A week ago I returned from a 40-day work trip to Croatia. Although my free time was limited, I made the most of it by touring the city on foot, taking a weekend trip to the Adriatic Sea, and hiking a couple short trails. It brought back so many fond memories and it reinvigorated my appreciation of how small the world is.

I stayed in Zagreb, the capital city, where one forth of the country’s population resides. Being one of a million people going about their day, it was easy to disappear in the crowd and become as nameless as the person who just passed by me on the sidewalk. But in the same breath one can’t help having moments of great significance, especially when experiencing a new place for the first time.

For instance, when I stood next to the Cathedral of Zagreb, a towering 12th-century, very finely detailed architectural masterpiece, I was one of probably millions of people throughout history that stood in that same court. But at the same time I was overcome by the privilege of my presence there in that moment. I was historically insignificant yet personally fulfilled at the same time. The dichotomy is striking.

While staying in Lovran on the Adriatic Sea shore, I took a day hike into Učka Nature Park to the summit of Vojak Peak. This is the highest point on the Istrian Peninsula at 1401 meters (4600 feet) above sea level. I took in views from the top of a stone tower built in 1911. Although this is over 1000 feet lower in elevation compared to where I live in Colorado, it still provides great views of the surrounding area and sea below. On the day I was there, however, my view was impaired by the cloud inversion. Other hills in the area were visible and I enjoyed occasional glances through the clouds to the sea and terrain below as the clouds broke up and reformed. 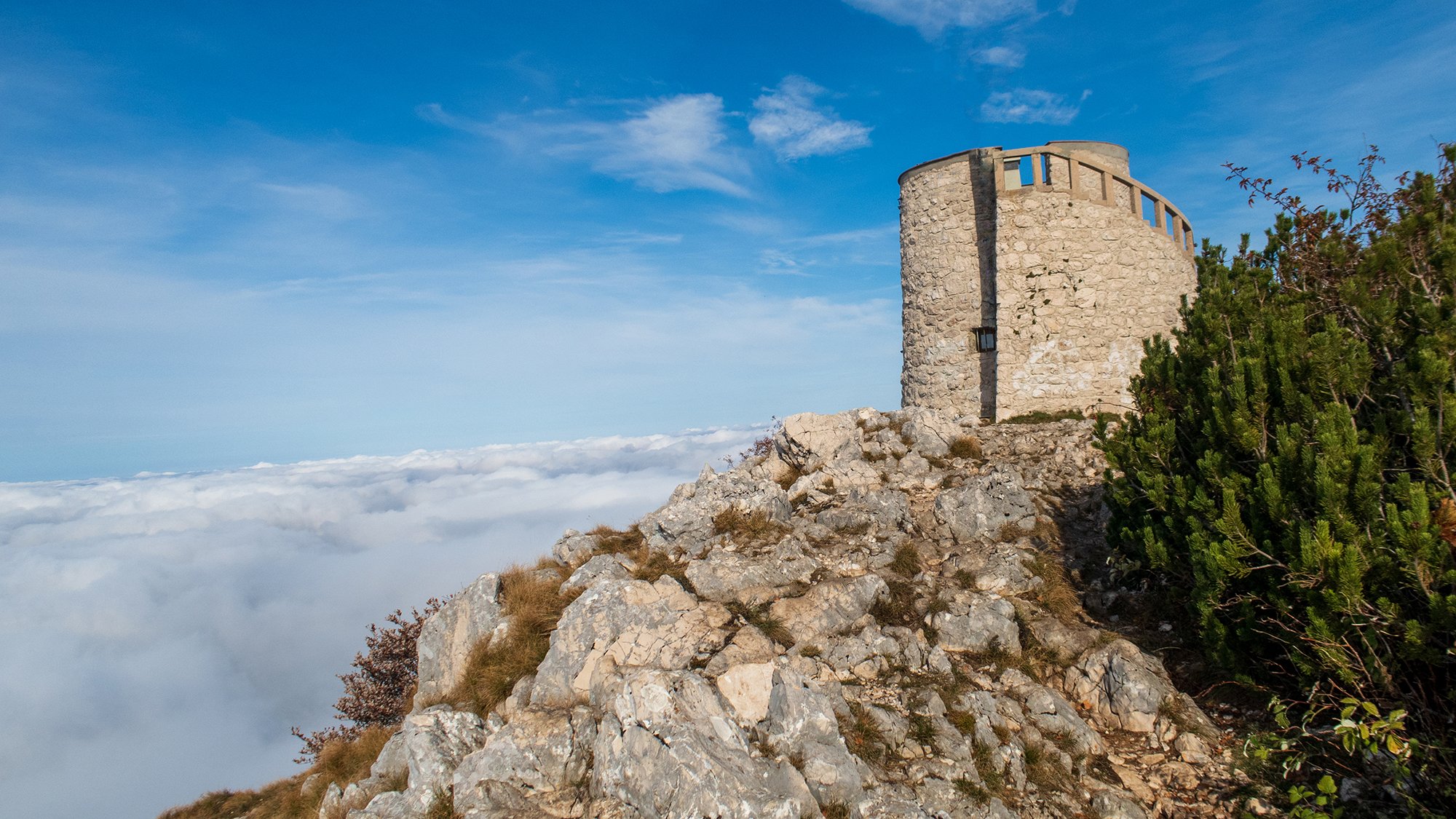 Climbing up to that summit, the trail twists through limestone deposits protruding out of the forest floor. Scattered among tall trees, these white rocks with bright green moss growing in cracks and crevasses creates a spectacular celebration of the fall season in concert with a gold and rust-colored carpet as far as the eye can see.

This limestone is understood to have been formed as early as the Cretaceous and Jurassic periods. Some of it had been taken out of here to build the columns of the White House in the U.S. Capital. Now, there’s some history! And that's a great demonstration of how small our world has become. 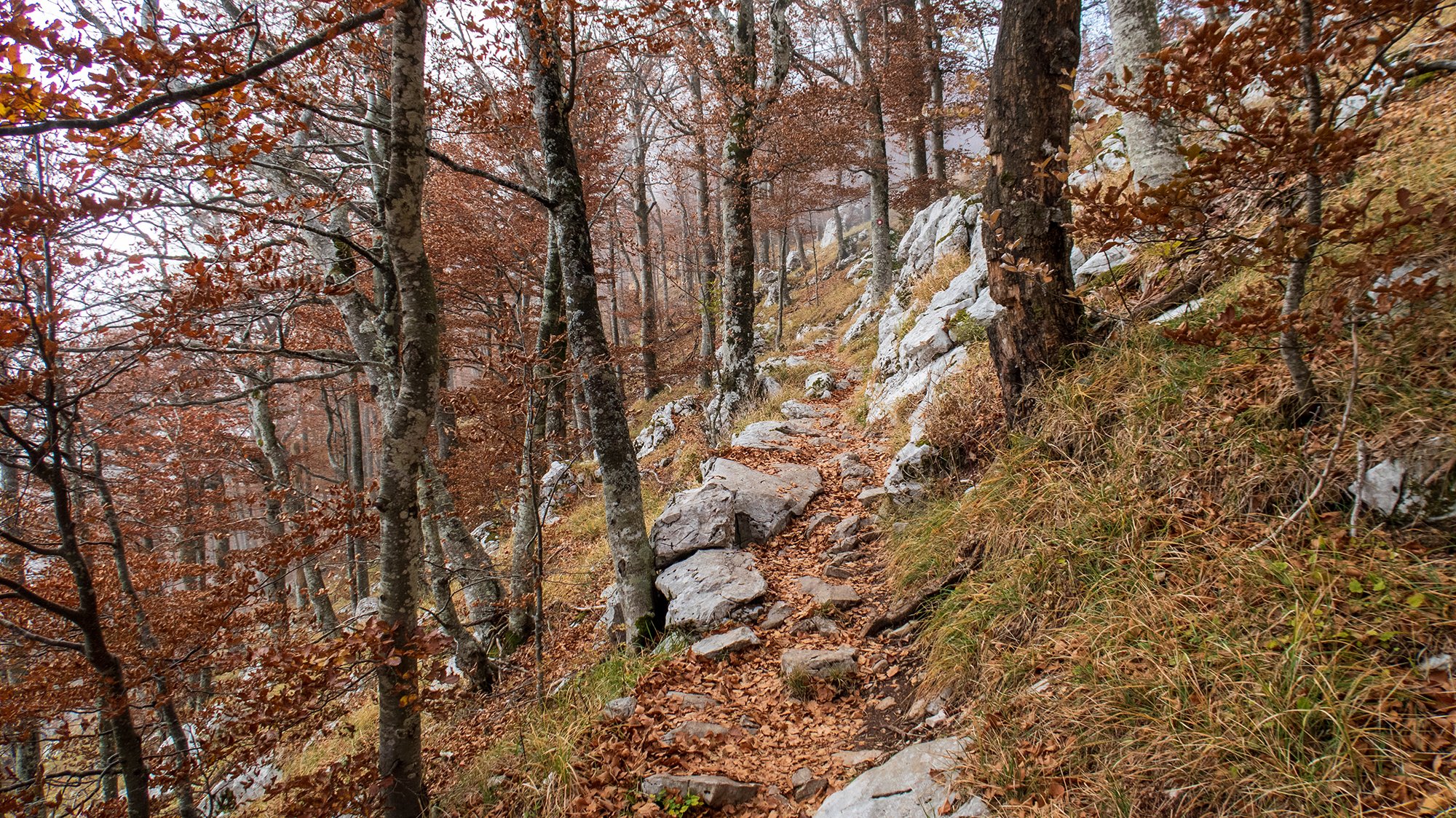 I couldn’t help but wonder how many people throughout the course of time had seen and walked by these stones along this same trail. I had the same feeling and thoughts as I stood on top of that stone tower on the summit and looked out over the land and sea. In whose footsteps had I just walked? Whose eyes over the centuries have surveyed the same landscape as mine have today? For how many more generations will these same questions be asked? I am now a part of it all. As insignificant as my part is in all this, I am not any less significant as the ones before me or the ones after. And in this moment I am the most significant.

Maybe this is a lesson in presence, being here now, and appreciating the blessing and importance of our place in the world.

As we hike our next trail, let us not show contempt for the time we have to enjoy such a thing. Take it all in, appreciate our significance, and find humility in our insignificance.