Sky Pond – Not a Bad Hike

“I’ve never had a bad hike.”  Laura’s words were met with consent from Anne and I.  We reminisced about our previous adventures, about how tough, cold, windy, wet, painful, and exhausting some of them were; but they were never bad. None of us had never said, “I wish I had never done that hike.”  It seems the sum of all the misery this activity has brought us has never been greater than the joy we’ve received from it.  Perhaps this is a sign that we are doing exactly what we were meant to do. Today’s hike was another one of those confirmations of purpose.  The views: amazing.  The trail: fantastic.  The company: excellent.  The experience: not soon forgotten. The destination: Sky Pond in Rocky Mountain National Park, Colorado.

Colorado cannot be described in a word or a sentence.  Even books about Colorado do not adequately do justice to the diversity of beauty contained within its boundaries. From the gently rolling fields in the east to the majestic snowcapped peaks in the west, Colorado is an endless inspiring parade of wonder that begs the adventurer in all of us to explore.

Among all this there is one epicenter that perfectly captures much of what attracts people to Colorado: Rocky Mountain National Park.

The native Ute and Arapaho tribes lived in this area in the early 1800s, and before them, 10,000-year-old evidence bares signs of Paleo-Indian tribes.  The Louisiana Purchase secured the land for the advancing new Americans, and under the idea of Manifest Destiny came expeditions, fur traders, miners, settlers, and eventually politicians.  In 1915, President Woodrow Wilson signed into law The Rocky Mountain National Park Act to establish the park boundaries and to protect the area against selfish, destructive pursuits.

Four and a half million people visited this 415 square mile park in 2016.  Some of the less adventurous drive Trail Ridge Road through the park across the Continental Divide, which is wondrous even from a paved road. And others walk along its 355 miles of trails or gaze over the waters of its 156 lakes.

Over one hundred years later, today I joined a small group of adventure seekers to experience 10 miles of those trails and three of its lakes, intersecting with cascading creeks and waterfalls before rising above timber line to a prize of magnificent granite spires shooting up from the shores of Sky Pond.

This is a popular place for all the obvious reasons.  We arrived early to beat the crowds.  And later we were glad we did, as busloads of people were being escorted to the trailhead only a few hours later.

Not a mile up the trail, just after sunrise, we paused to take in the early morning alpenglow. 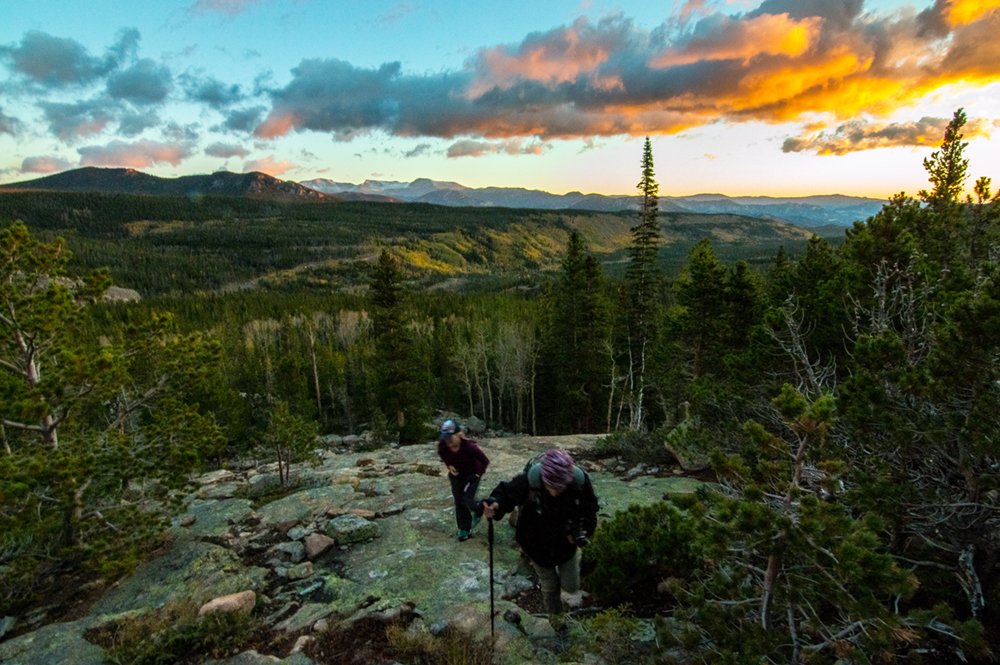 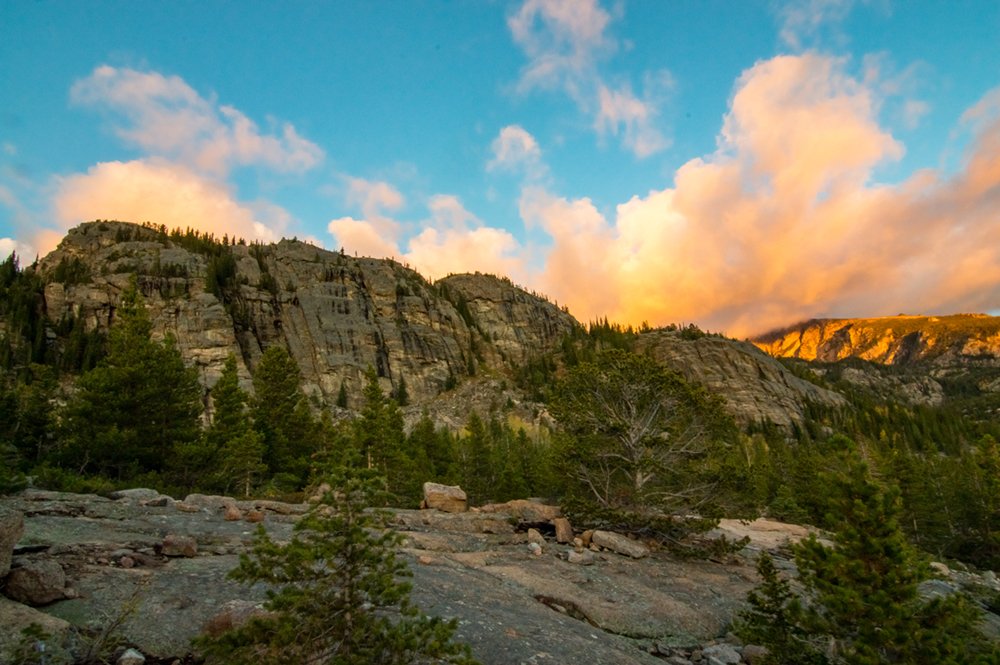 The trail is described as “strenuous” in some online descriptions, but for avid hikers it could be categorized as something less than that.  The path is not technical and well maintained. With the exception of a couple very short sections, incline on this trail is mild. 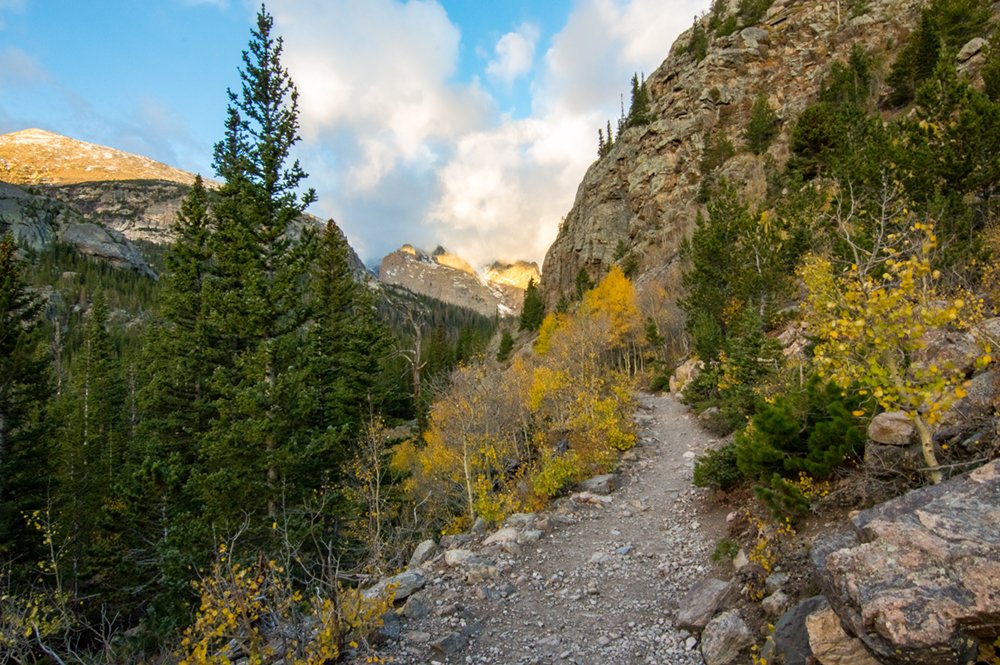 The Lock or Vale Lock is the first lake along the way.  The trail circles to the right, but for those who might want to explore, there are social trails that lead to other parts of the shoreline and above on the surrounding rock formations. 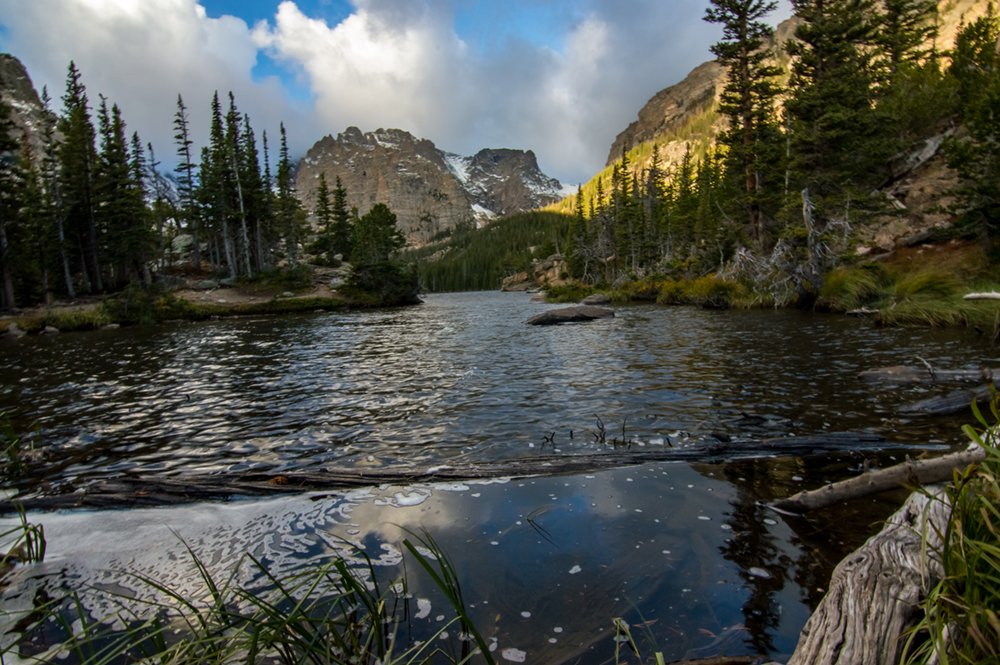 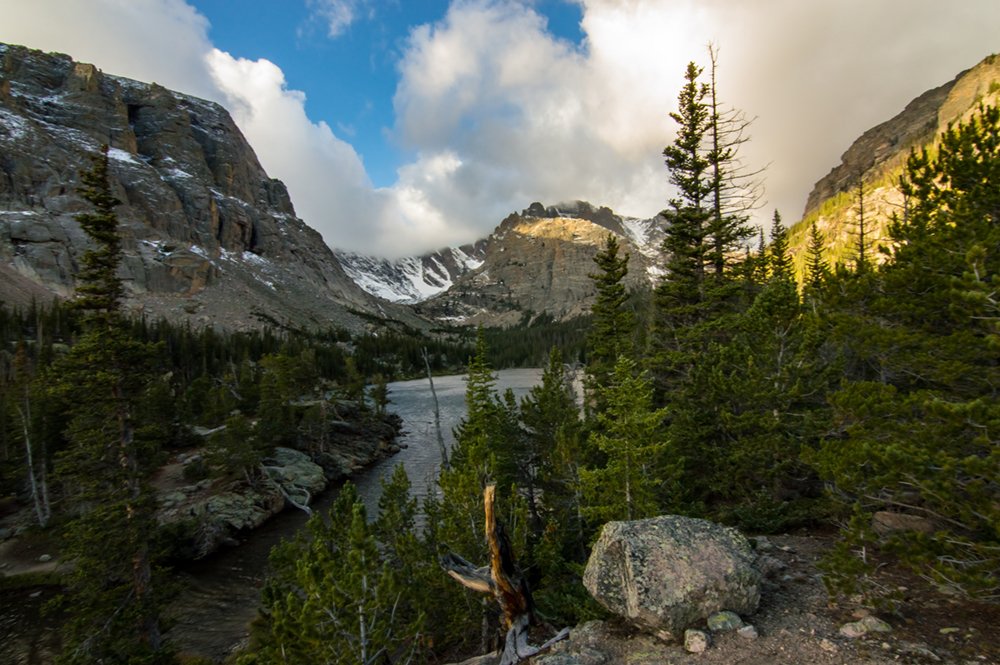 Portions of the trail are marshy as it generally follows Icy Brook.  The forest service has created log paths through these areas. 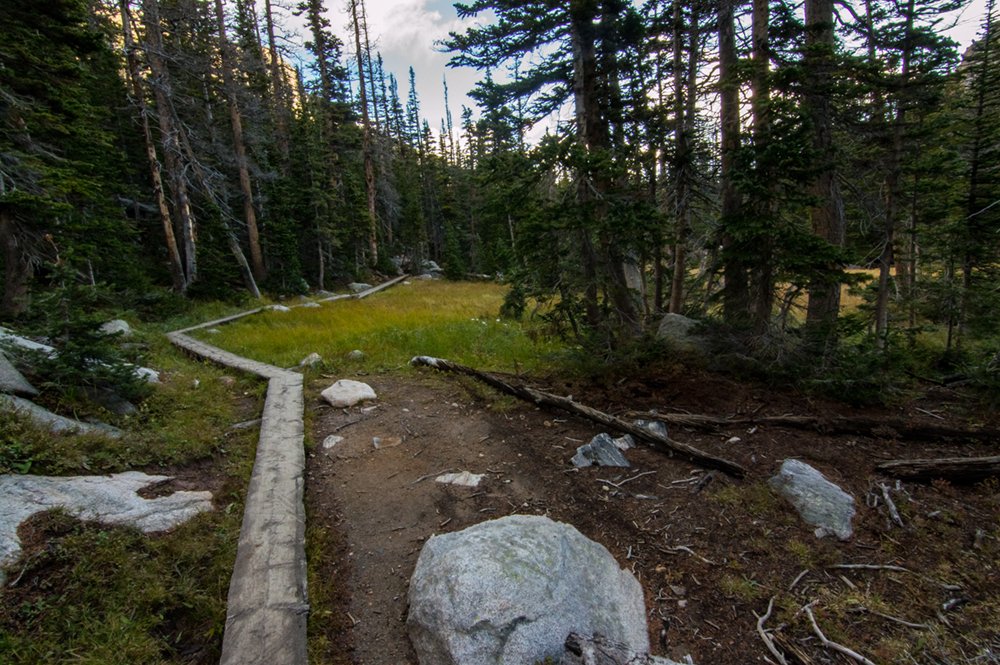 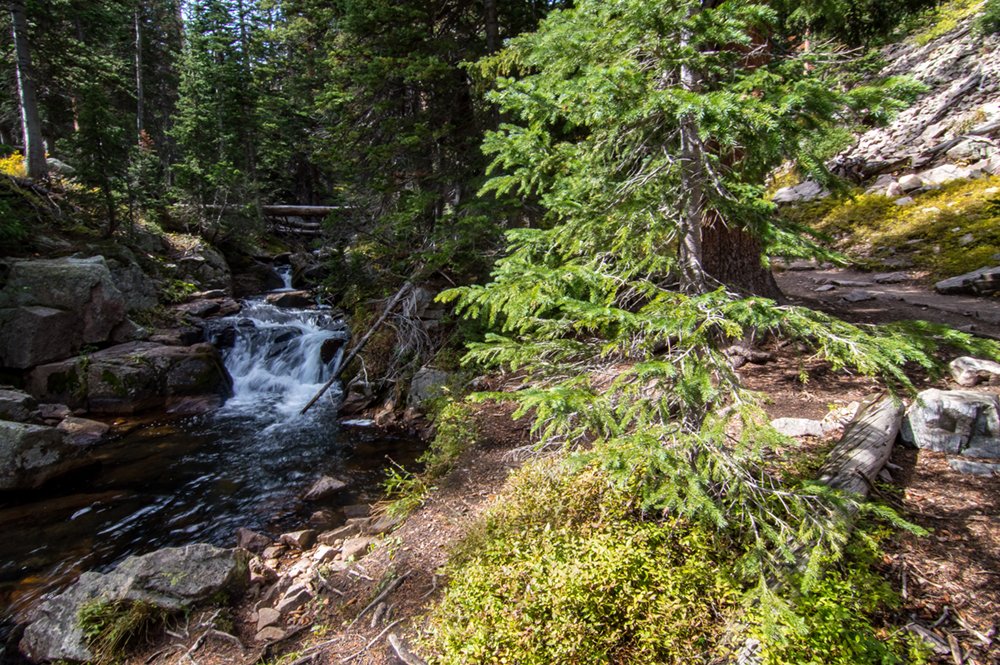 Not long after crossing Andrews Creek the trees start to thin and the trail soon opens to an expansive view of surrounding granite walls. 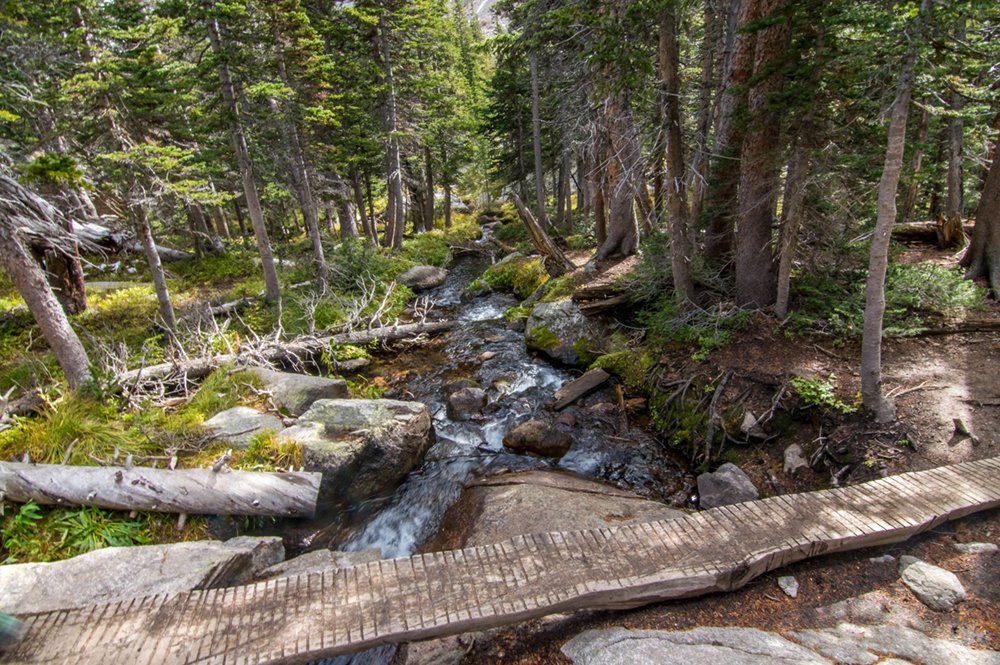 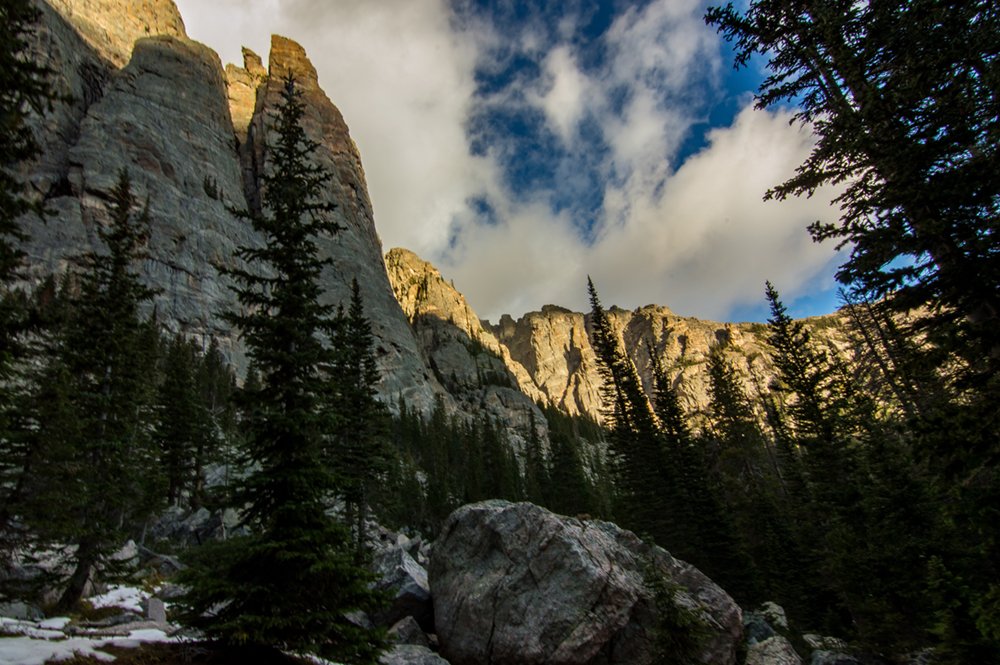 The approach to the falls below The Lake of Glass became icy with patches of snow and cold from the previous week still in the shadows. 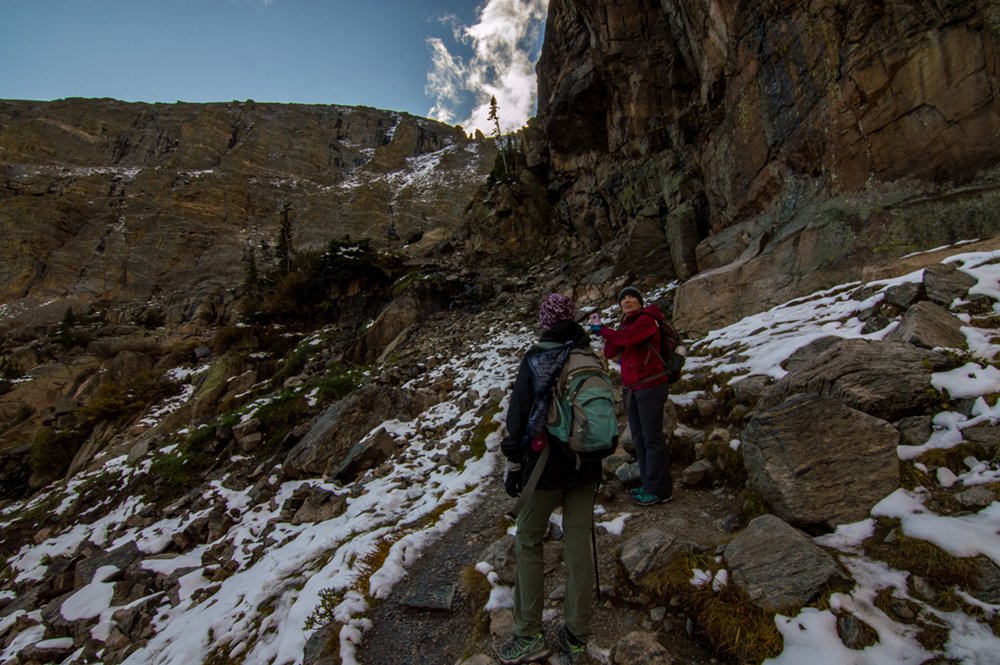 The way up to The Lake of Glass is via the right edge of a minor falls to the right of the larger falls.  At this time year and at this hour of the morning the rocks are icy. This requires extra traction devices, micro-spikes.  I didn’t get any pictures of this section. It’s only around 30 feet. I guess I was too busy preparing for and negotiating the way up.  And on the way down we had a line forming. So, I suppose instead of messing around with the camera it’s a great idea to focus on the task.  Yes, pun intended.

The wind was calm below the falls, but today it was a whole different matter above the falls on the shore of The Lake of Glass.  But that didn’t stop us from snapping a few pics. 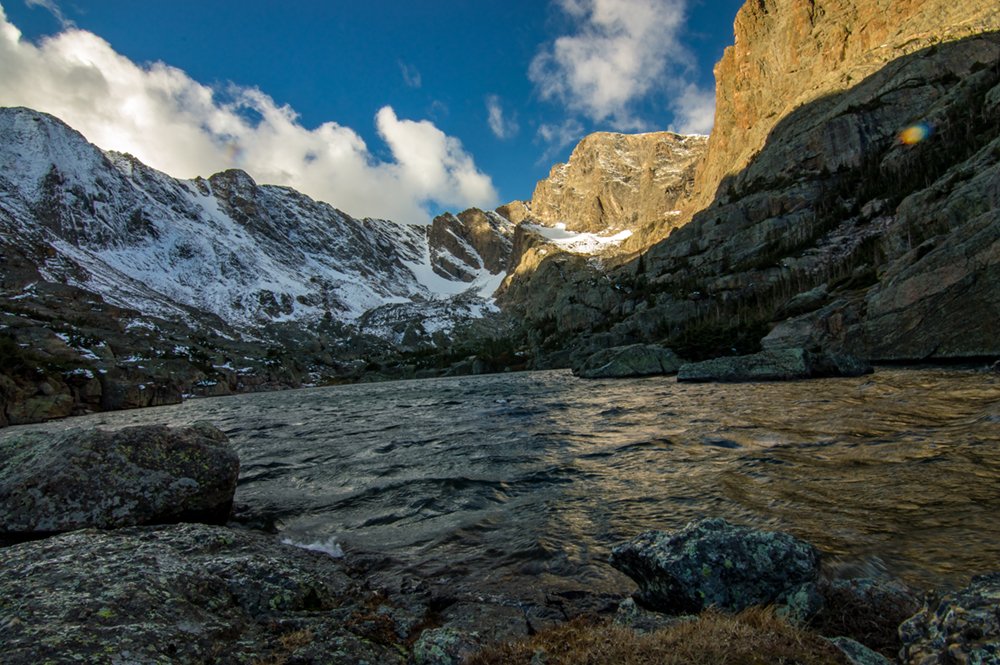 The route to Sky Pond from here is only about a quarter mile, but it isn’t clear at first.  My advice: climb up a little over some rocks and then drop down toward the lake.  You’ll follow the lake on the right side, the trail will show itself. 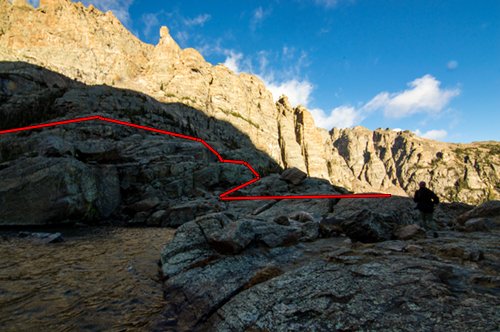 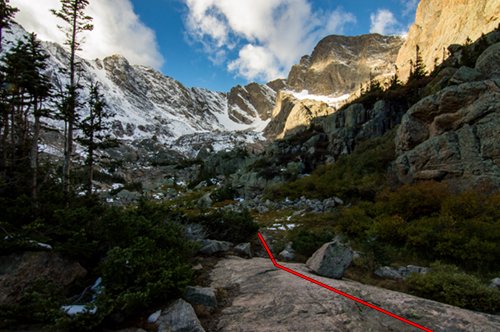 Just below the pond is a small water fall. 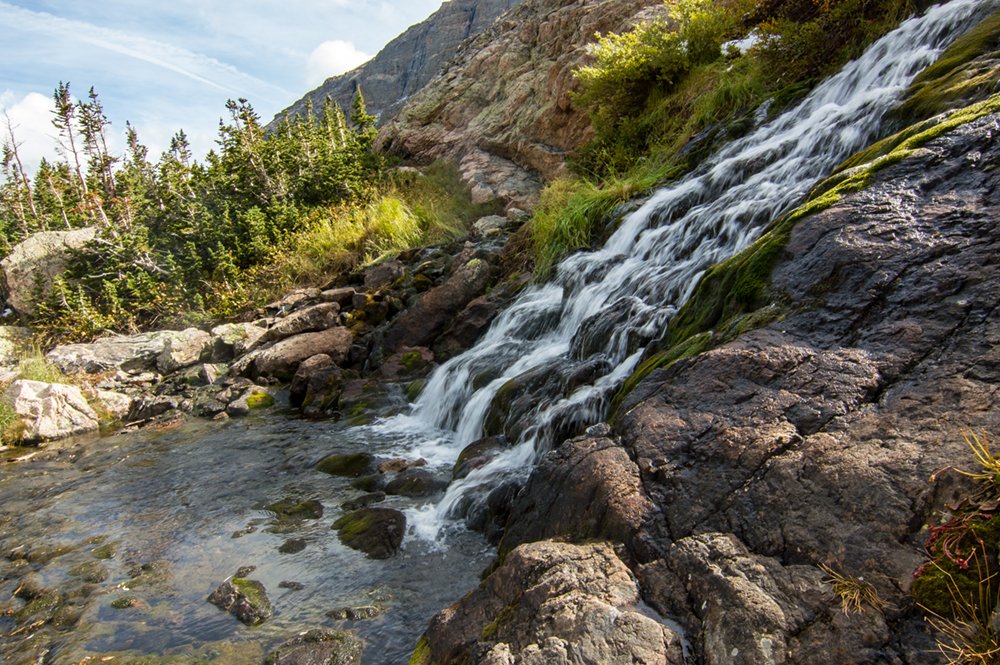 And then Sky Pond. 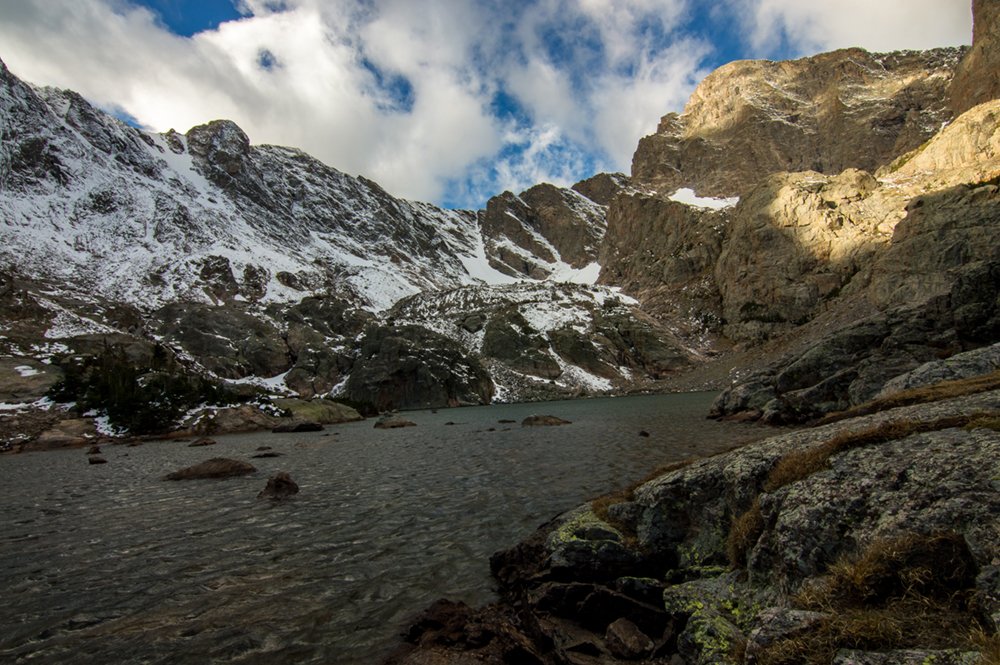 Turning around offers a nice view of the path already traveled. 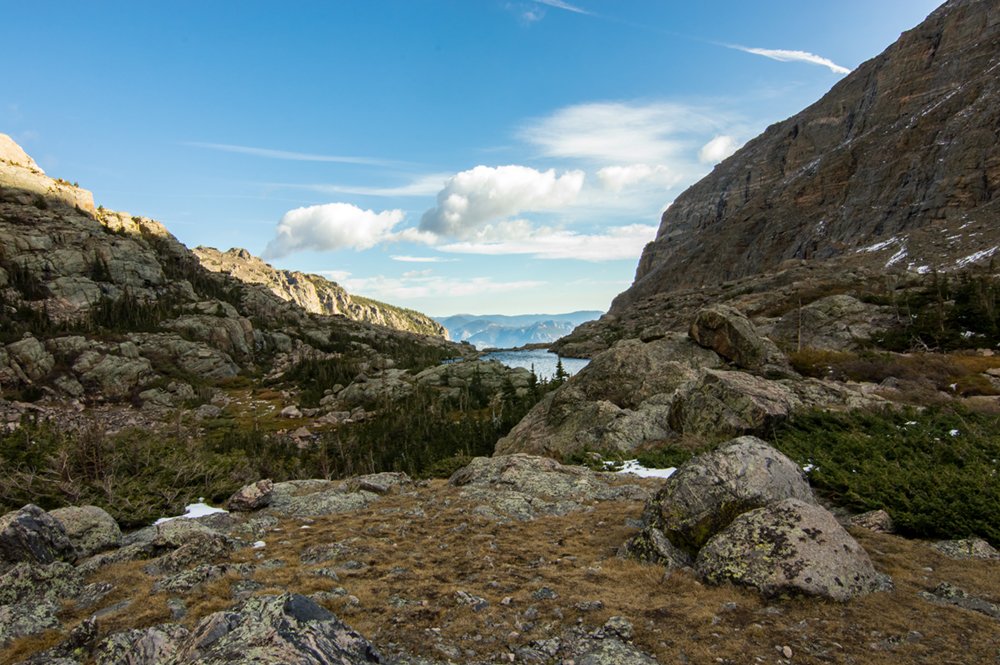 And circling the pond to the left is the iconic view of Sharkstooth. 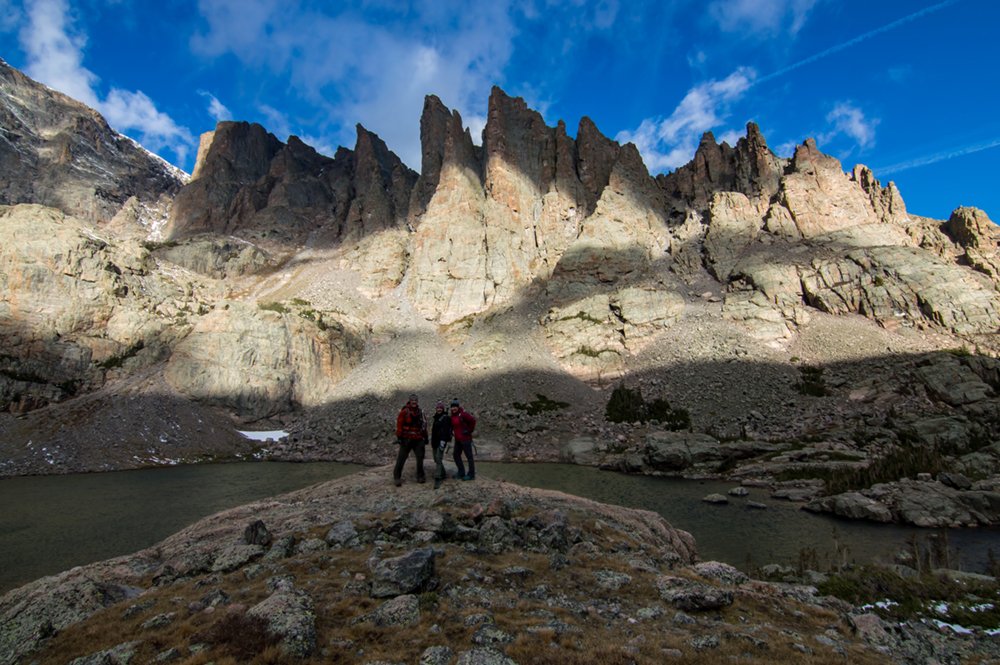 Of course, being that I can never get enough of this, we decided to climb up to a vantage point above the lake on one of the rock formations.  This is my climb up the chute (pic by Laura). 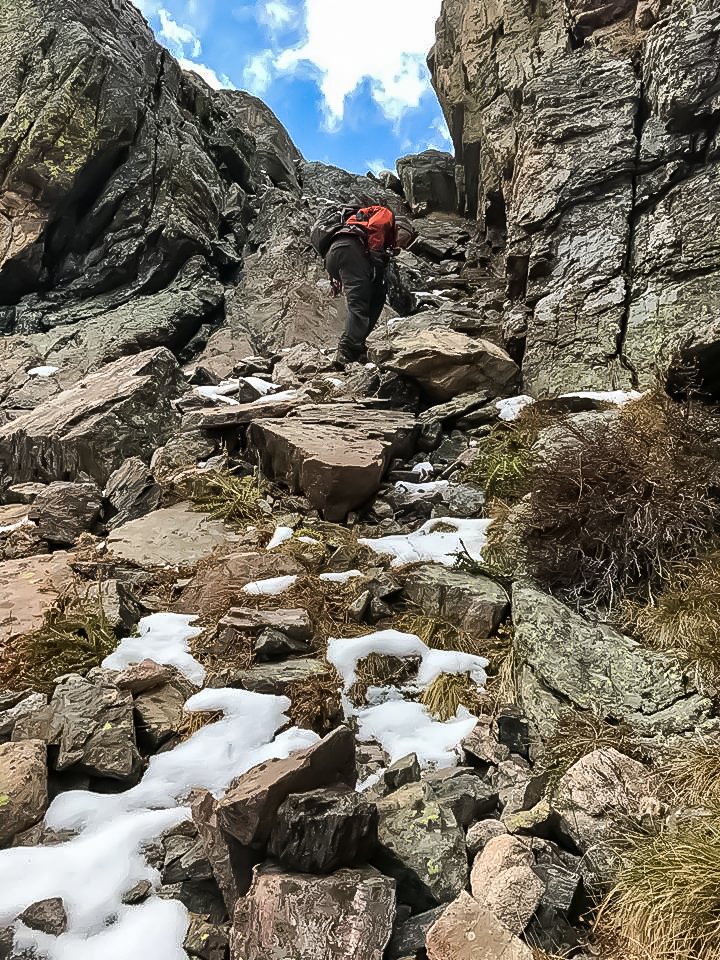 And this is our view from up on top. 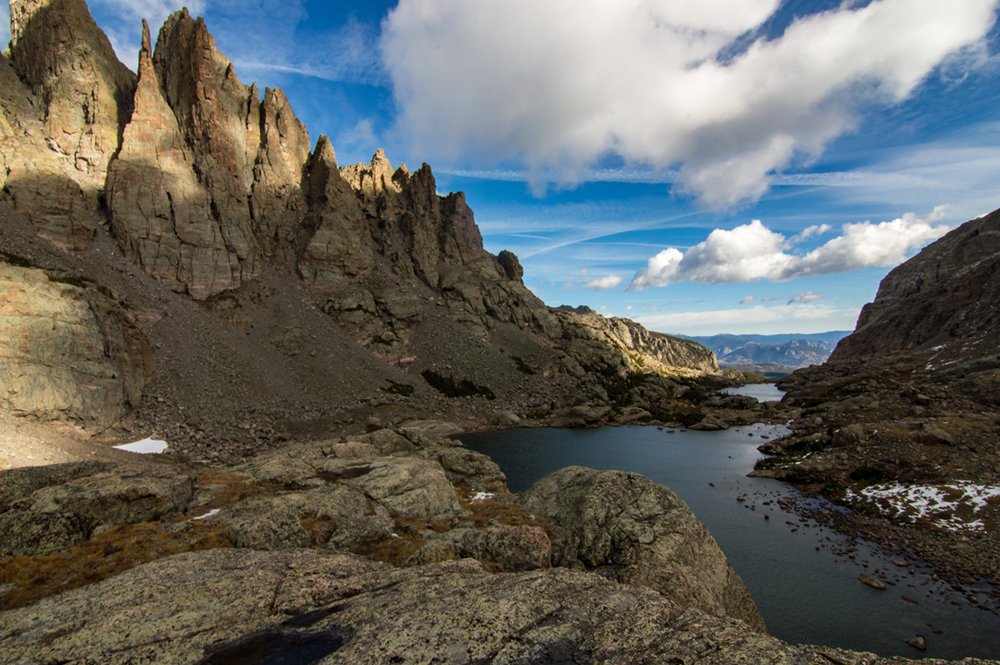 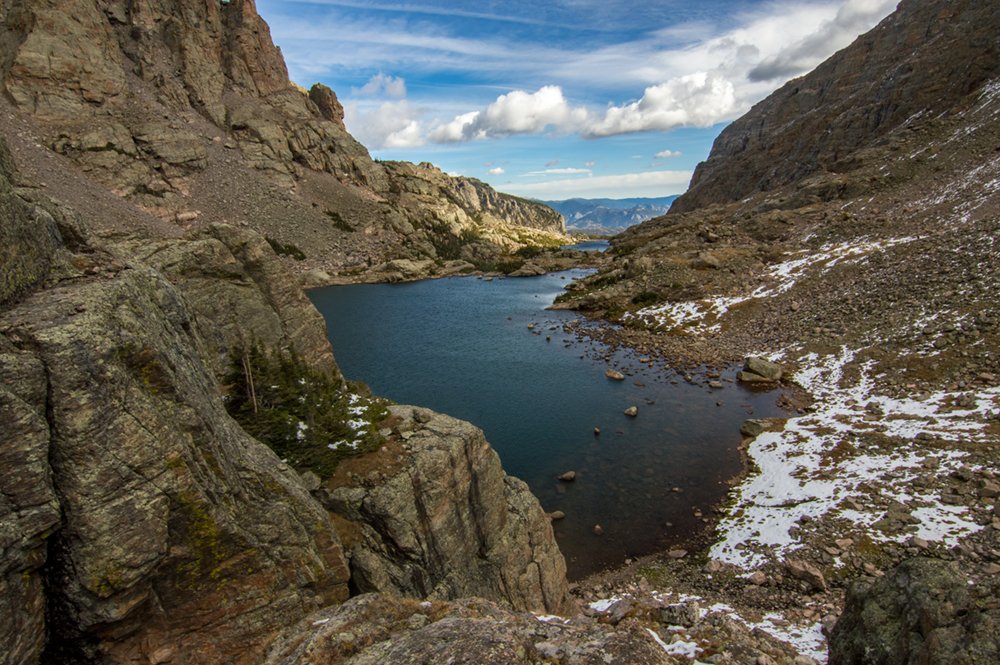 So, as you can see, not a bad hike… like every other hike… right?