Fall is the best time of year. It’s especially nice to be on top of a Colorado 14er in the fall. Lightening is much less common. The crowds are much lighter than in summer. Sure, the temperatures are cooler, but the conditions are still manageable and comfortable - unless, of course, a freak snowstorm rolls in.

I couldn’t pass up the opportunity to go back to the San Juan Mountains to meet up with other 14ers.com people and make another run at Red Cloud and Sunshine Peaks. It was our Fall Gathering event. Last year on this same weekend we attempted the same climb unprepared for waist-deep snow and penetrating cold winds. This year the mountains gave us more inviting conditions.

The group had reserved the entire Mill Creek Campground just a few miles from the trailhead. Brian and I met up right outside of Gunnison on the drive from Denver, arriving at camp sometime around 8:30pm Friday night. 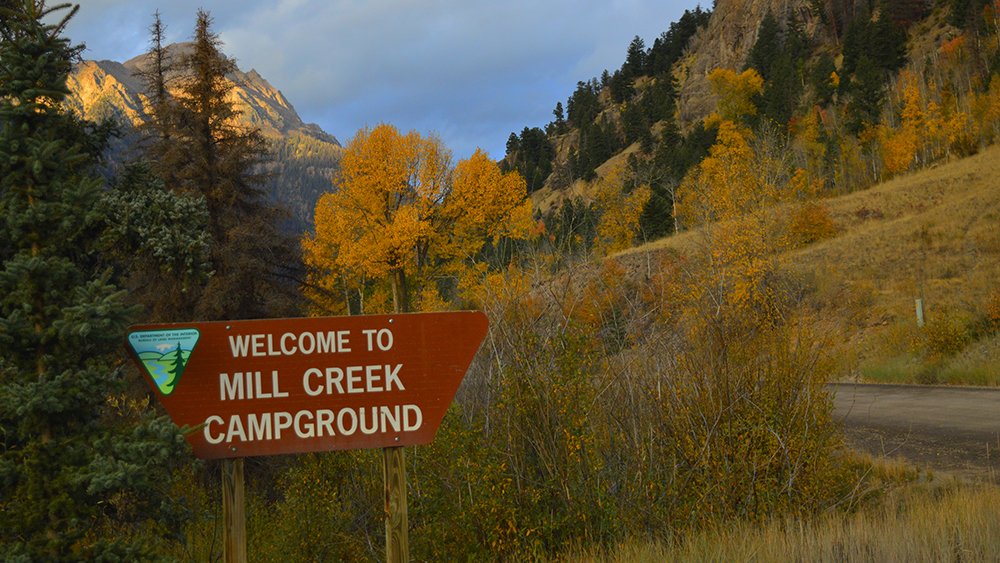 We were up and riding along a shelf road portion of CR 30 just before sunup the next morning toward the Silver Creek / Grizzly Gulch trailhead. Driving this shelf road without meeting any oncoming traffic is a bit nerve racking. On one side is a rock wall, on the other is an immediate drop down the side of a mountain. In several places it’s barely over one car width wide. On this morning we met another Jeep coming the opposite direction. The mind quickly scans the few options available in these situations. Either someone needs to backup or we decide to squeeze two Jeeps in a 1.5 Jeep space. Lucky for us we were in a little wider part of the road and the other driver had one of those hobby Jeeps that could ride up ridiculously steep embankments. He did. I squeezed by him. I couldn’t really see the drop off to my left. But on our return trip I did. And it was dangerously close to a bad ending. We moved along, just like all things we survive.

Grizzly Gulch is on the southwest side of the road. It leads to Handies Peak and the American Basin. We took Silver Creek northeast toward our first summit of the day, Red Cloud Peak.

If one were to continue along CR30 it would lead to Cinnamon Pass, part of the Alpine Loop Scenic Byway. The previous week would have been great for this as it was at peak of the fall colors. The aspens blanket portions of these mountains in a golden glow, broken only by pockets of deep green pines. It’s a stunning contrast. Peak season for these colors lasts only a few days. By now most of the trees had shed their leaves. Fall had settled in.

The Silver Creek route was my last hike of the year in 2014, missing the summit by 800 feet in elevation. That wouldn’t be the case this year.

The people that are part of this 14er community have amazing stories that are often downgraded to footnotes at these gatherings. We met Scott and his son on the way up. Scott has over 2000 summits to his credit all over the world. His pre-teen son has over 400. We also met a mother-daughter couple. The daughter was recovering from an ankle injury encouraging her mother to take on two peaks that day. We met a few people who traveled from Illinois to climb some mountains. A man in a straw hat had a yack horn he brought from Nepal. He would blow that horn on top of every summit. We met a mother/father/daughter group that had climbed Sundog, Sunshine, and Red Cloud summits before we summited just one. Later in the day Brian had met a small group and their two dogs that had climbed 25 miles of trails and peaks that day. The inspiring people on these trails are part of the reason I continue to venture out into these wonderful places. The mountains seem to attract those who have a desire to fill their life with challenges and experiences that mock the daily grind. I love that I have found a kindred spirit in these people and places.

David Mitchell wrote, “… there ain't no journey what don't change you some.” That’s what I’m after, and that is exactly what happens every time I’m out on these trails.

Along Silver Creek we came across an ice bridge that had not yet melted from the previous winter. It formed a tunnel 15 feet long and 8 feet high. In the shadows of these hills are pleasant surprises. We took a few pictures and moved along. 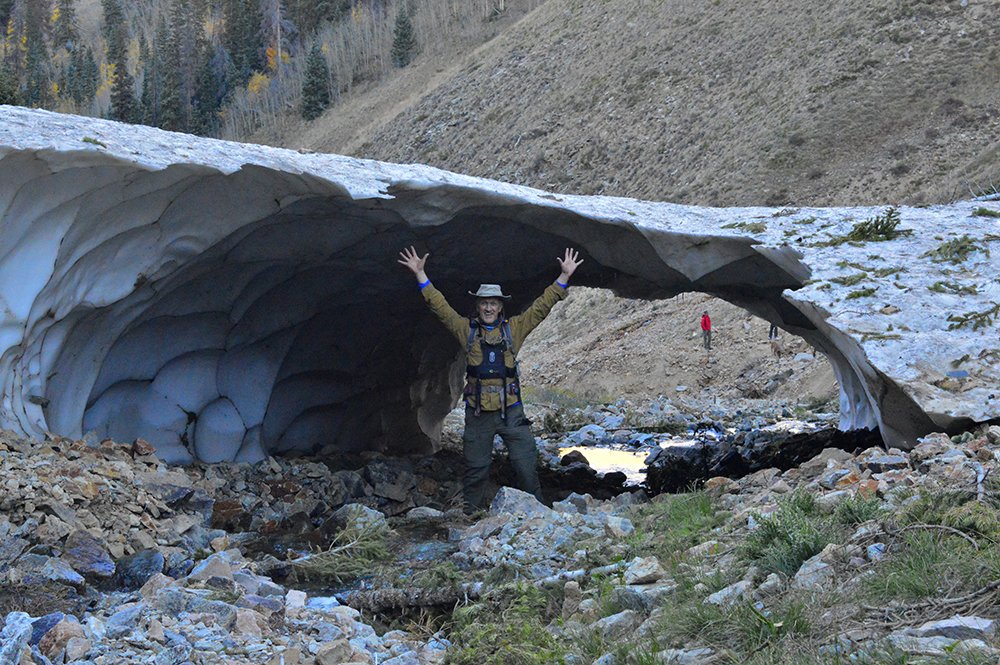 The saddle near the headwaters of Silver Creek offered our first glimpse of Red Cloud. At that point we were a couple hours into the climb. The color and shape of Red Cloud Peak gave it its name. The dark red rock and dirt especially on the summit is caused by oxidation of the iron content. This is mostly volcanic rock. The 30 mountain peaks over 13,000 feet and the two 14,000-foot peaks we climbed today are all part of the Red Cloud Peak Wilderness Study Area that was designated in 1980. 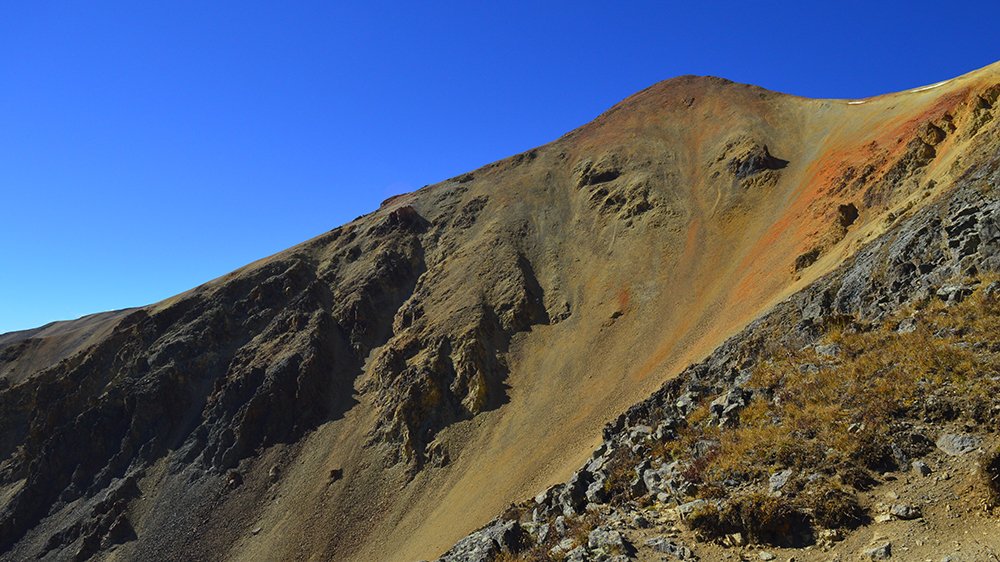 Around noon we were on the summit of Red Cloud for a quick snack and some pictures before hiking along the ridge toward Sunshine Peak, 1.5 miles to the south. To the north is a clear view of the most recognized Wetterhorn and Uncompahgre Peaks. The southern view is Gunnison National Forest and the Continental Divide. Looking closer, one can see the highest point on the Colorado Trail as it shares the same path with the Continental Divide National Scenic Trail, skirting along the alpine slopes several miles away and across the Lake Fork Gunnison River Valley. 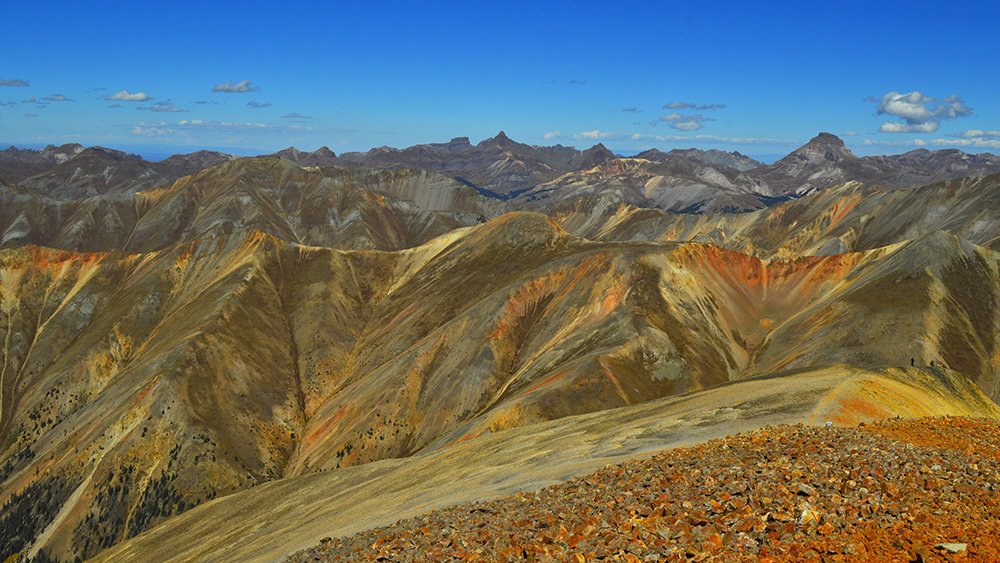 The mountains toward the sun take on a blue haze, whereas the mountains to the north show off the same red hue streaks with a gray volcanic rock base all resting in a bed of thick deep-green pine forests. It’s hard to get enough of these views.

Before 2pm we were heading down the west slopes of Sunshine, but not before a tuna salad and soda cracker feast. Brian turned me on to this satisfying summit meal, packed with sodium and protein to replenish what had been lost in the ascent.

It’s important to refuel what the body burns. Sodium is important because it is an electrolyte that becomes depleted during periods of intense physical exertion. Electrolytes are substances with free ions that help regulate nerve and muscle functions by allowing for better conduction of electricity throughout our bodies; that is, optimal physical performance. Any foods that contain sodium, potassium, calcium, bicarbonate, chloride, hydrogen phosphate, or hydrogen carbonate are good sources of electrolytes. On these climbs I either bring an electrolyte mix for my water, take electrolyte supplements, or consume natural foods that contain electrolytes. Caution here: too many electrolytes can have equally negative effects. Be sure to read labels or talk with a doctor to better understand how to properly regulate electrolyte intake before getting all crazy with a good thing. We had planned on including Sundog Peak as a descent route. Sundog is a 13er that is an alternate route on the way back to the Silver Creek Trail. The alternatives were to head back the way we came (another 600+ more feet in elevation gain) or select a well-traveled but cautioned chute near the top of South Fork basin. We didn’t have the energy for another ascent, nor did we like the idea of heavy winds on the narrow ridge of Sundog. So, we opted to take what we believed was the trail down a steep chute. It was a decent trail to the top of the chute, clearly marked with cairns, but became quite eroded and uncertain on the steep portion.

The chute turned out to be a very dicey class III route with lots of loose rock and scree that made it impossible to maneuver on two feet without sliding or tumbling uncontrollably down several hundred feet of edgy granite. The final portion of this section was climbing down the last 10 feet of vertical rock face with very few handholds that were not loose rock. We were glad to be safely out of that section of the descent. We affectionately named the route simply “Suck” or “Death Chute”. This is not a recommended route. 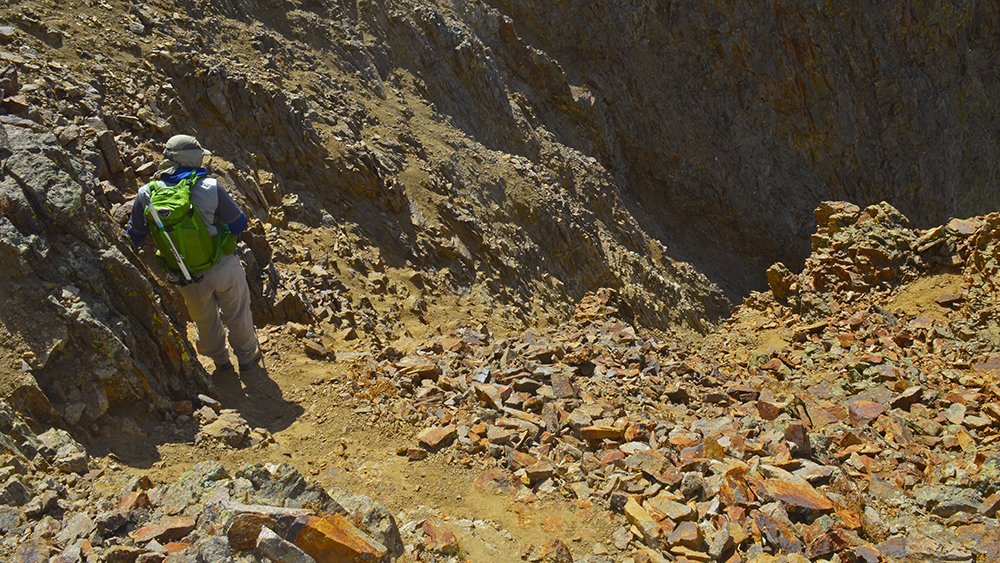 We still had another mile of loose talus before reaching what more closely resembled a hiking trail.  The most interesting part of this portion of the trail was that the talus we were walking across is actually a rock glacier. A rock glacier looks like a glacier made from rock. Geologists believe rock glaciers may have started as an ice glacier but as talus fell from the mountain onto the glacier it eventually formed into talus cemented together by permafrost. It’s a formation commonly found in this Wilderness Study Area, but unusual to the rest of the Rocky Mountains.

It wasn’t long before we made our way back to the forest - tall pine and sporadic aspen groves, the forest floor covered with the colors of fall and even some late season flowers. The trail also passes an old abandon log cabin. 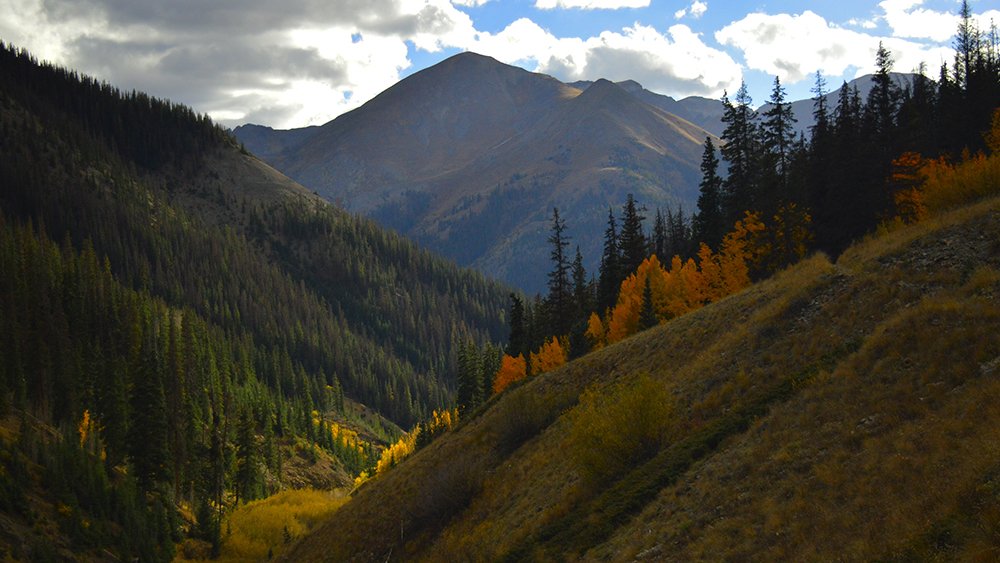 We were back at the trailhead by 5pm. The final part of the trail was a view of bright autumn colors against the sun approaching its set behind Handies. Perfect ending to a beautiful day! We had over 4000 feet elevation gain and nearly 10.5 miles of trail.

Dinner, a few beers, a warm campfire, and conversation among good people ended our Fall Gathering 2015. It really is the best time of year.