The Monarch Crest Gift Shop is a common stop to pick up resupply packages and recharge power units for thru-hikers. It’s right on Highway 50 as part of the Collegiate West route on the Colorado Trail.  I took this route and stopped there when I hiked that trail.

The portable charging unit I carried was an Anker PowerCore II 10000. (It's around $30 on Amazon) It’s light weight (6.8 oz) and can fully recharge my phone at least two times allowing me 5-7 days without having to find a power outlet. I had decided prior to my hike that I would not be a heavy power user, and so this choice fit my style perfectly, almost.

The downside of this unit is that it takes 4-6 hours to fully recharge. This works fine if a person is staying overnight somewhere. But for temporary stops, like Monarch Crest, be prepared to wait… and wait… and wait… for a good portion of the day. It definitely won’t be a quick stop.

It turns out the safety features in the Anker protect the battery from overcharging and manage the charge cycle in such a way that it helps preserve battery life and keeps it from overheating, which would be dangerous. The downside of this feature is the charge cycle goes into a type of trickle charge as it gets fuller. Thus, that last 25% or so of charging will take nearly as long as the first 75%.

Five hours later: I became impatient. I unplugged and got back on the trail before it was fully recharged. It was just one tiny little light short of a full charge. How bad could that be?

By the time I arrived in Lake City 7 days later I was dangerously low on power. Both my emergency GPS unit and my phone were on the last few hours of use, even though I had been very stingy with conserving power.

Applying standard risk management methods, if anything would have happened to delay me or if I had needed to use my devices more, I probably would not have had the power to send out an SOS signal or handle additional communications with search and rescue if needed. The backup plan was to flag down a fellow hiker, that is, if I was able to do that and the other hiker had an emergency device with more remaining power than I did. All the elements that had to be in place to mitigate this risk reduced the likelihood of that plan being successful.

Admittedly, the chance of an experienced and cautious hiker needing search and rescue is very low, but the impact could have been very high if such an incident occurred. A person can plan and prepare, but even the best laid plans can be spoiled by the most freakish happenings.

Most people play the odds. I can’t blame them. It’s reasonable. This thru-hiking thing is best done with a free spirit, which is not one to be held back or burdened by such obscure possibilities. Live in the moment. Be emboldened by a little risk taking. I get it.

But I couldn’t help but wonder if just a small change would bring even more surety to this freedom on the trail.

I began wondering about the benefits of carrying a charging unit that uses solar energy as a power recharge source. My house is mostly powered by solar energy, why shouldn’t I apply the same principles on the trail?

Of course, I could have just been more patient at Monarch Crest to allow my Anker to fully charge. This would have given me a little more power reserve. But aside from this specific situation there are many other circumstances where power availability could quite literally be the difference between life and death. Having a healthy power reserve continues to be an important safety measure for me on future long hikes or even more remote day hikes. And so I began researching solar power units.

There are essentially two types of solar chargers you’ll see on the market for backpackers: panels without power banks and panels with power banks. There will be more detail to follow on the difference between these two.

What’s up with Photons?

Before we get into reviewing some currently available models, let’s first understand a little about the technology. The sun produces radiation which we see in part as light and is made up of an elementary particle called a photon. These photons oscillate and form an electromagnetic wave at many frequencies within a broad spectrum of infrared, visible, and ultraviolet light. For those who like to measure things, it’s within the range from 100 nanometer to 1 millimeter in wavelength – or 100 billionth of a meter to one thousandth of a meter. The shorter the wavelength the higher the frequency and more powerful the radiation. It’s all a very scientific kind of stuff, quantum mechanics, to be specific. But we don’t need to understand all that for the sake of this article. Just know that photons are powerful elements from the sun that form an oscillating electromagnetic wave.

Now that we understand the relative characteristics of a photon, let’s talk about solar panels and how they work. Solar panels contain photovoltaic cells. These cells have two really tiny layers, one positively charged and the other negatively charged, creating an electronic field between them. This field will either attract or repel other charged particles. But without introducing any other charged particles in the field, it’s mostly a buzz kill – nothing’s happening. Enter photons. 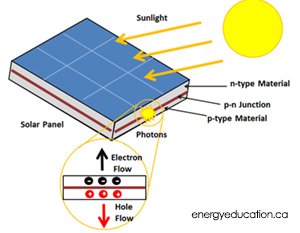 When photons from the sun are introduced to a photovoltaic cell, the oscillations from the photons excite that field between the two layers and forces electrons from the negative layer to move to the positive layer, thus forming a flow of electricity. These electrons are then collected on a metal plate and are transferred via wires that may go to a battery for storage or to a circuit that charges your cell phone, for instance.

Note that volume matters. Increasing the number of photovoltaic cells (the larger the solar panel) the greater the power generating capacity. This is important for backpackers and hikers, as you will soon see.

Tell Me What Matters

Other than the different types, what else matters when deciding on what to buy for backpacking? Several factors hit the top of my list:

Weight. I don’t like to carry weight that has little value to me. If I carry a solar charger, I want it to be the lightest weight model that serves my needs best.

Capacity. How much power can the unit deliver? For power banks, this is typically measured in milliamps per hour (mAh). Higher mAh numbers mean more power availability but typically longer charging times and heavier. Panel outputs are typically measured in watts per hour (Wh).  Also, if I have a need to power many devices, I may want to consider something with larger panels, because larger panels produce more capacity faster.

Lesser Factors. I would also consider features like the number of USB connections, auto-stop feature when fully charged, a built-in LED light, method of attaching to my pack, durability, bulk, adaptability to my pack, customer reviews, and customer service.

There are over 50 manufactures of these devices on Amazon alone with new models coming out often. With so many to choose from I’m not going to do an extensive review in this one article. But I recently picked up a few panels with power banks that represent what is available on the market today.

This article does not have any reviews for panels without power banks. However, this is a viable option for backpackers. I may explore a review of these types of units in a future blog post. 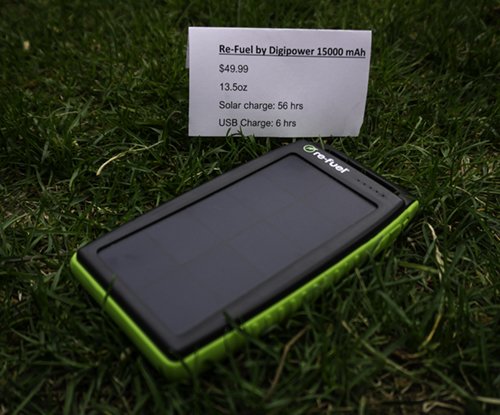 I purchased this off a recommendation from a fellow thru hiker. Digipower had sponsored his Pacific Crest Trail hike by supplying this unit and other power units for his phone and Go-Pro camera. So, with a generous promotional discount code from him I ordered this unit. I immediately charged the unit via a USB power source and re-charged my phone a couple times until the power was nearly exhausted. Then I put it in the sun for 5 days; it didn’t charge at all. When I asked about the issue, they simply sent me a new unit without question – great customer service! The subsequent unit charged as advertised. 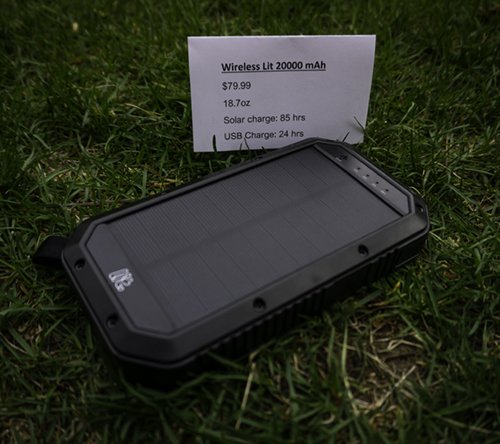 I saw this unit in an online ad, then I spent some time on their website. The marketing on it was impressive, almost too good to be true. They proudly announced the unit could recharge completely via solar or USB in an hour; it weighed a quarter of a pound (4 oz); and it had a wireless phone charging feature.

I'm not one to put a lot of confidence in marketing copy. But I thought… maybe, they had some newer technology that allowed for faster solar charge times and lighter weight materials. So, I ordered it.

After receiving my unit, I discovered much of what they advertised that attracted me to the unit was not true (gasp!). It did wirelessly charge my phone – that was good. But it was larger and much heavier than advertised, and the charge times were grossly misrepresented (both solar charging and USB charging).

So, being a guy who believes in second chances, I contacted them to ask for an explanation and/or for them to make the appropriate corrections on their website. Crickets.

Zero response to something as blatant as these claims is unsettling. Based on this alone I would caution against any dealings with this company. I don’t like outright dishonesty. I can't explain this any other way. 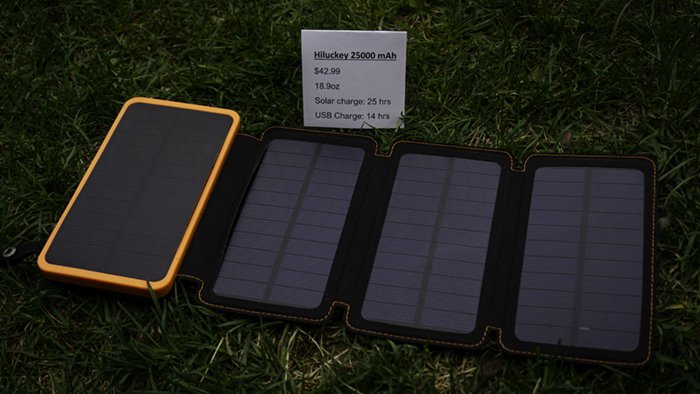 This unit has 4 times the panel surface area of the single panel unit. Its weight is comparable to the Lit Mobile unit I tested, which puts it in a heavy weight category for me. But it does come closer to an attractive solar charge time. It’s a 25K mAh unit, which is attractive for longer periods between USB power sources. If they made this unit in a 10K mAh capacity it would weigh less and make for even faster charge times; this might be more attractive to carry on a long hike. So I asked Hiluckey if they had any plans on making a lighter model. It turns out they have a 10K mAh unit, but it’s out of stock.

It’s a stretch to say I could rely on this type of unit to supply a substantial and sustainable power source while backpacking for an extended period (7+ days). There would have to be full sun exposure for many consecutive days. This means absolutely no clouds all day and no hiking in shaded or partly shaded areas. Rarely has this ever been the case for me.

At this point I would say that carrying a single small panel unit on a long trail would not be worth the weight. The exception to this might be a lighter weight multi-panel unit.

I instead continue to recommend a portable non-solar charger such as an Anker PowerCore (10K mAh for shorter segments between recharging or the 26.8K mAh for longer segments). This option provides power at a lower weight.

Sadly, it appears my search for a solar charger power bank to take with me on long hikes has been a bust. But the good news is that this technology is rapidly advancing. Some smart manufacturer out there is bound to come up with the perfect solution soon.