Although I’ve taken up residence in Colorado the past 19 years and I will most likely take my final breath in this beautiful place, Upper Michigan will always be my home.  The north woods are part of my travel plans every year or two.  If fate allows during my visits, I like to set aside time for wondering the trails among plush green hills and low lands or watch the sunset over Lake Superior.  On this particular trip I had hoped to hike a trail in the Porcupine Mountains.

But first let’s clear something up for those who are unfamiliar with the geography: Upper Michigan is not the northern part of the ‘glove’.  It’s the other part, the land north of Wisconsin and connected to Lower Michigan by a 26,000-foot suspension bridge – The Mackinaw Bridge – quite a site!

The Porcupine Mountains Wilderness State Park is nearly 60,000 acres located 15 miles west of Ontonagon, my home town.  One would think upon visiting Upper Michigan that the whole place is wilderness.  The view is dense forest or a Great Lake in nearly every direction no matter where you stand.  But, the Porkies, as it’s known to the locals, is Michigan’s only designated state wilderness area.  The land once occupied by native Ojibway and Chippewa had been home to large virgin White Pine, Eastern Hemlock, and hardwoods like Maple and Yellow Birch.  When European explorers discovered from the natives that the land was rich in copper and silver the land was soon exploited for its natural resources to include lumber and wildlife.  Today those industries have taken all it can from the land and have since abandoned it, leaving behind only those who love the richness of its beauty.

There are all kinds of fun facts about the Porkies.  A quick internet search will consume and entertain.  Feel free to dig into its rich history; it’s quite a special place.

Among the 87 miles of trails in this area I chose the Escarpment trail today.  It begins at the Government Peak Trailhead a little over half way up State Highway 107.  This highway is only 10 miles long and parallel’s the southern shore of Lake Superior from Silver City to Lake of the Clouds Overlook.  It was named after the 107th Engineer Combat Battalion. A bronze plaque dedicating the highway is located 4 miles down the highway from the M-64 intersection.  It happened to be Memorial Day when I did this hike, so I stopped to view the dedication to those who gave their lives on French battle fields during World War 1.

The Escarpment Trail shares a trailhead with several other trails in the area.  There is a parking area for 10-12 cars immediately off the road.  It’s well marked. 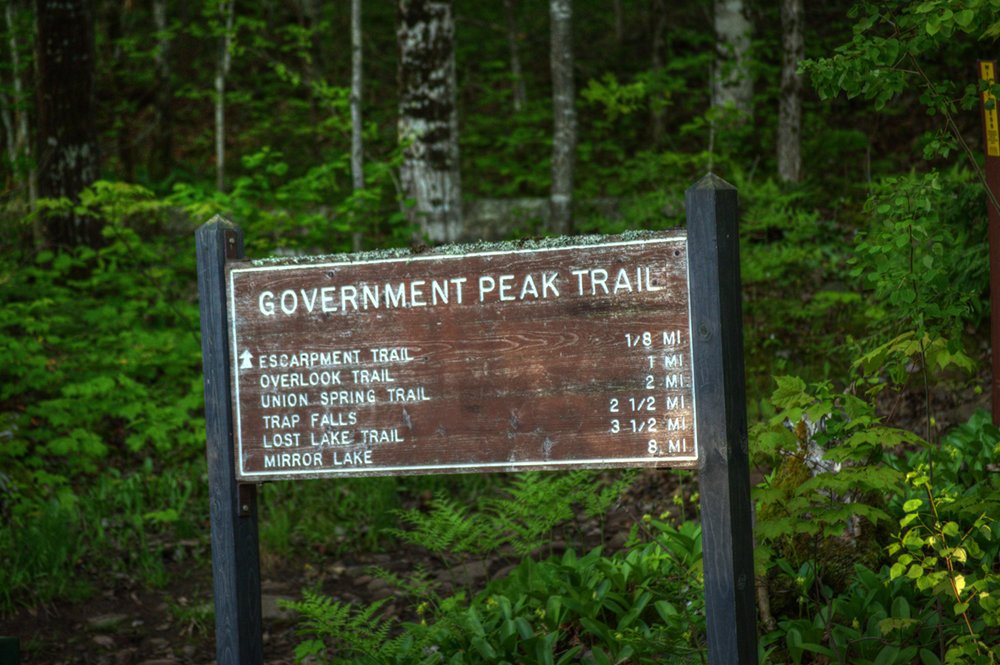 After an eighth of a mile it turns west and climbs through dense forest. 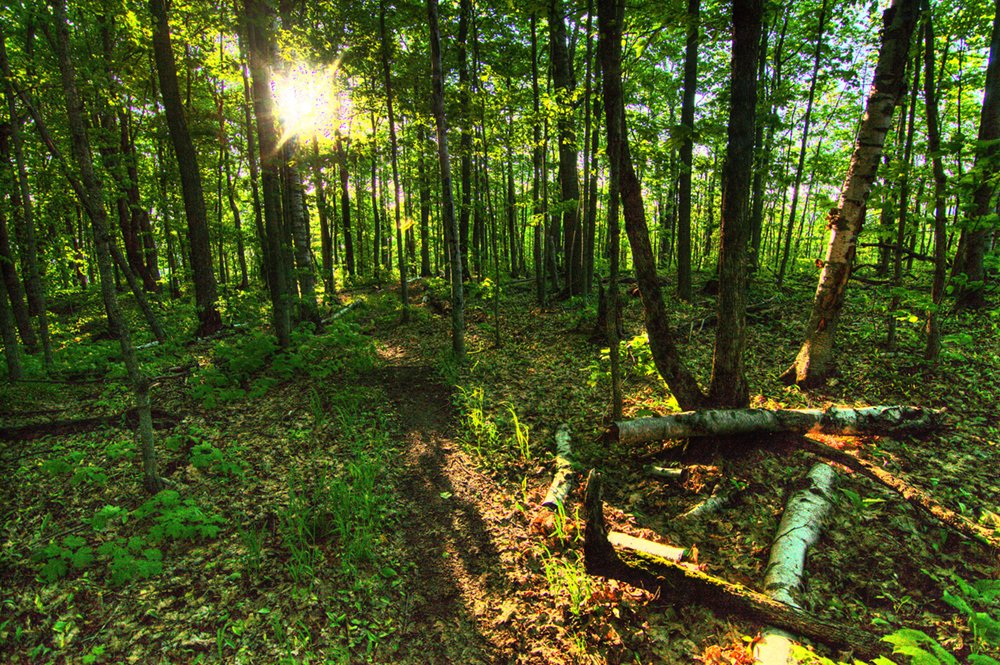 Not long into the Escarpment Trail a marking for the Cuyahoga Mine is immediately to the north of the trail.  It was once owned by the Ohio-based Cuyahoga Mining Company (1856-1866).  The company spent a few thousand dollars doing some exploratory mining, but never claimed any commercial amounts of copper.  This location is one of the small pits the company created.  Essentially, it’s a moss covered rock pile – but, knowing the history makes it much more interesting. 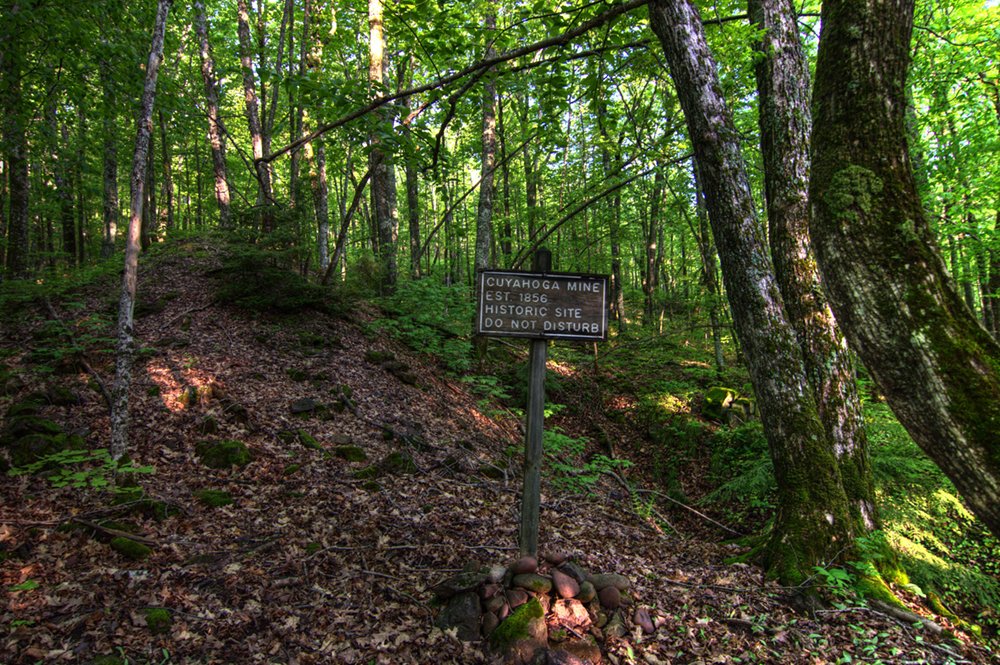 The trail traverses west first over Cuyahoga Peak.  The east-end view of the Lake of the Clouds soon comes into view. 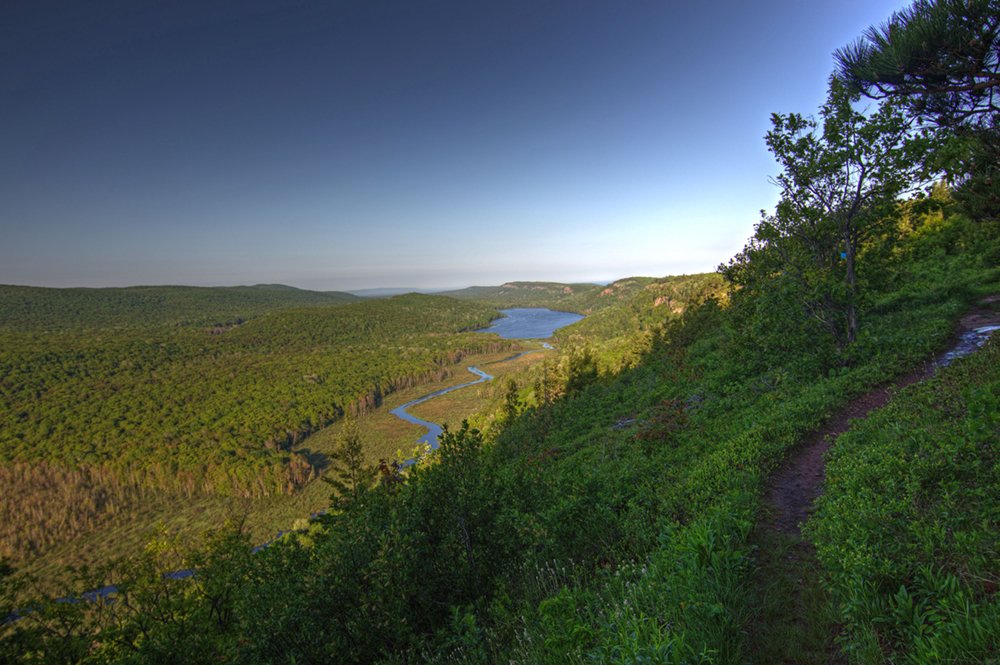 The views from the entire ridge are spectacular.  The trail skirts to the top of bluffs formed from rock classified as part of the Keweenawan Supergroup, a sequence of volcanic and sedimentary rocks that can exceed 80 feet thick and 300-500 feet high.  A good article about the geology can be found on the Michigan DNR web site.    From these bluffs one can see how the Carp River is born from the tributary creeks, feeding Lake of the Clouds and then continuing toward the western most portion of the wilderness area and eventually flowing into Lake Superior. 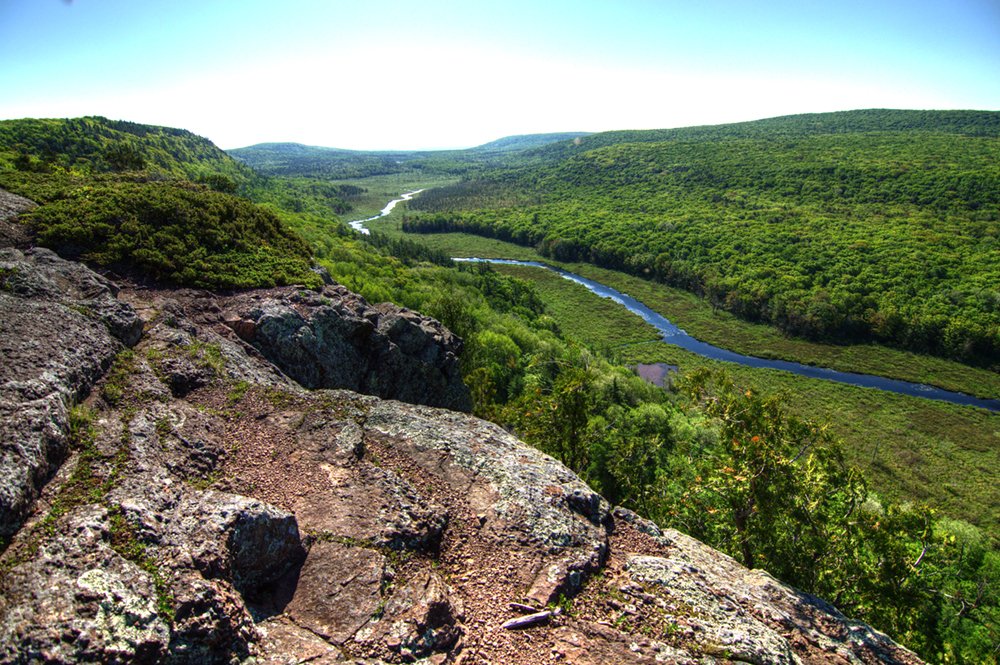 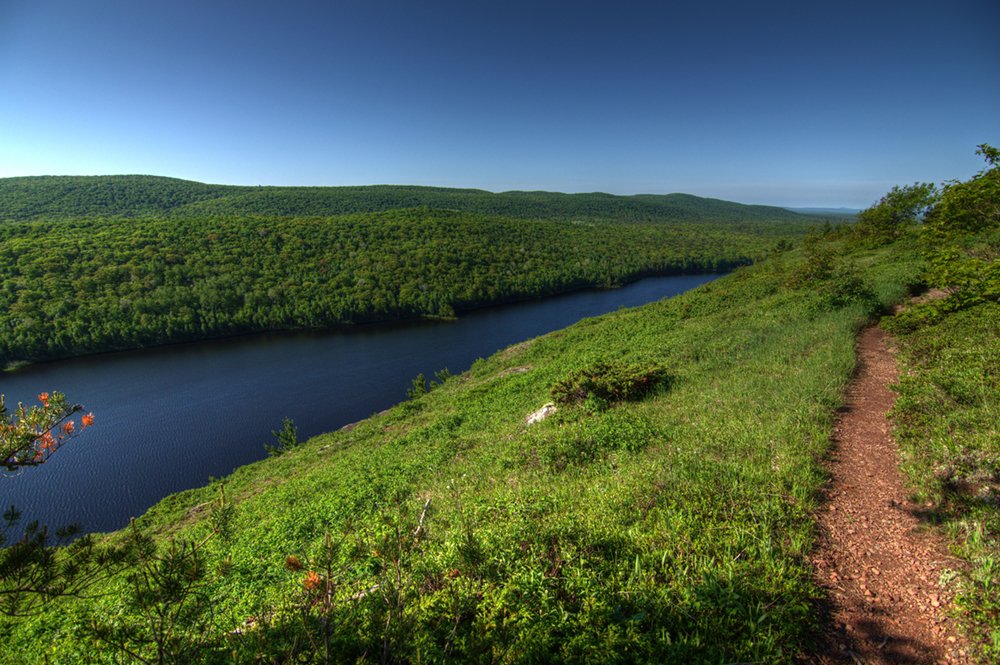 The trail dips in and out of the forest.  The spring forest floor is covered with white and pink trilliums. 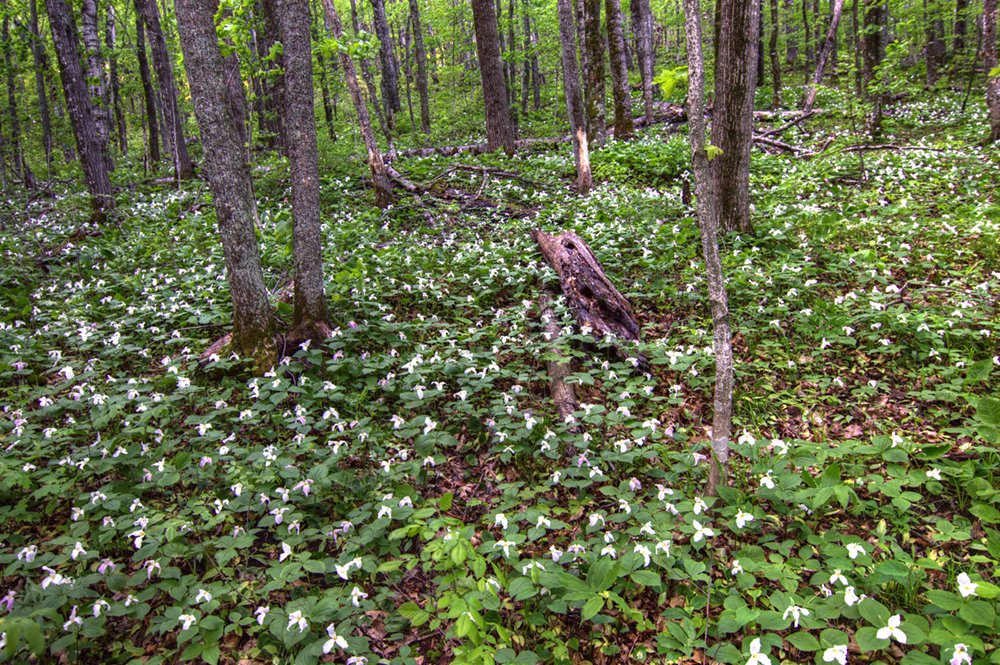 Soon you’ll cross over Cloud Peak and continuing until reaching the Lake of the Clouds Overlook.  Neither Cuyahoga nor Cloud peak have summit markers.  There are other trails in the area that meet up with this trail. 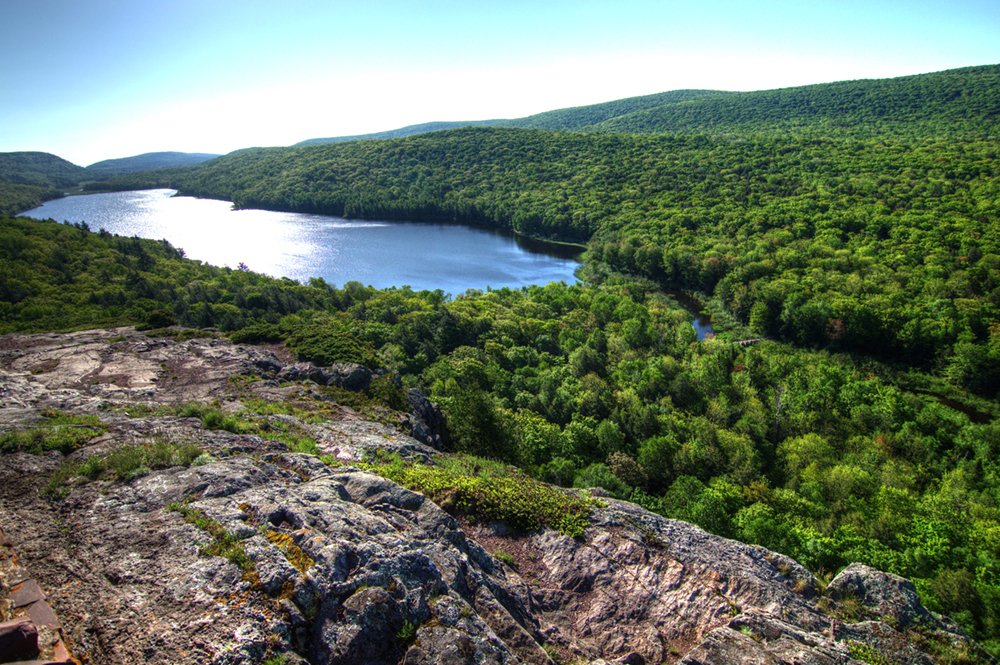 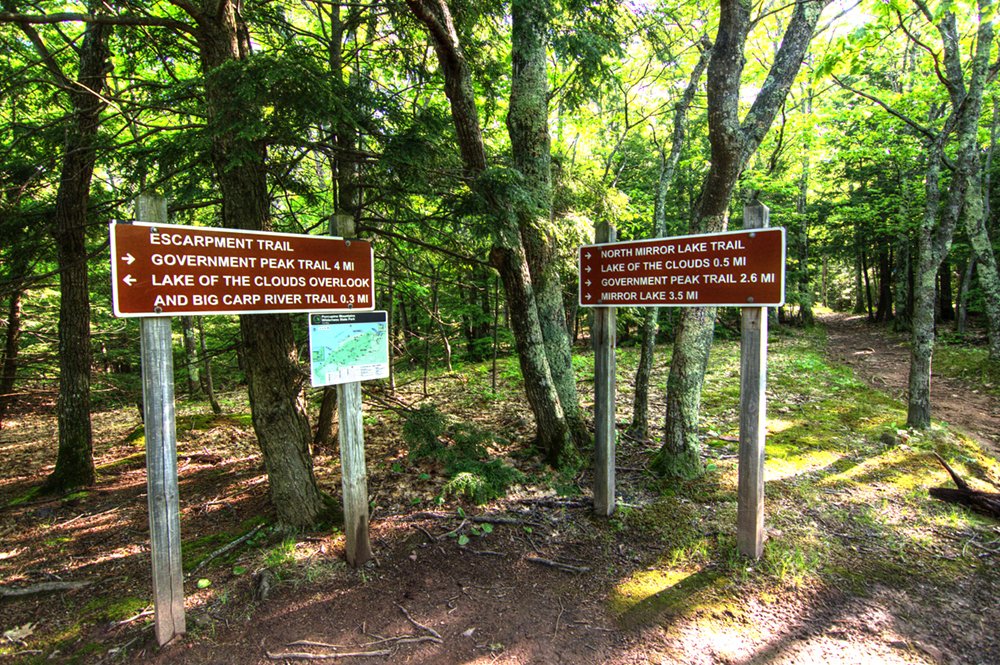 The total elevation gain for the day was 1400 feet, light compared to my Colorado hikes but still enjoyable and not without the challenge of negotiating slippery moss-covered rocks and the occasional steep approach.

The trail is slightly longer than 4 miles one way.  I returned the same route for a total hike of just over 8 miles.